Coulrophobia Alert: Send In The Clowns 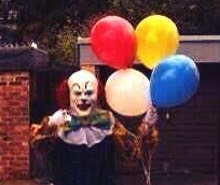 The Northampton Clown is not a phantom. He has been photographed.

Readers of this blog are well aware of our clown-radar being on high alert. Sometimes it has been about Jokers and Jokawilds, sometimes of Evil Clowns, and frequently concerning Phantom Clowns.

On 9/11, the clown news presented itself subtly.

As the Denver Post penned, "a U-turn, not clowning around, caused a crash involving a van full of clowns" in West York, Pennsylvania. The September 11, 2013 incident happened on that Wednesday evening, according to multiple media sources.

The van was going south on South Highland Avenue when its driver attempted a U-turn near a gate of the York Expo Center and collided with another van that was also heading south about 5:45 p.m., according to West York Police. Police said the driver, 83-year-old James Billingsley of York, also known as "Dimples the Clown," suffered a minor bump on the head. His passenger clown, 77-year-old Norman Clouser of York, was unhurt. 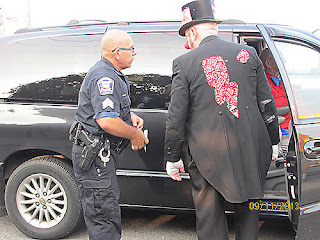 A photo from the scene of the clown van accident.

The van with the clowns in it was also pulling a trailer with a clown car on it.

Four clowns were in the van at the time, and one of them, the driver who goes by "Dimples the Clown," was taken to an area hospital for minor injuries.

Police say the clowns were going to the York Fair when the driver missed the entrance and attempted to turn around when the crash happened.

Police said "Dimples" was wearing clown shoes but the oversized footwear apparently didn't play a role in the crash.

West York Borough police Sgt. Brad Thomas said both vehicles had to be towed. He didn't know if the clowns ever made it to the fair.

A clown appearance much more sinister is another bit of news this week, out of the United Kingdom. 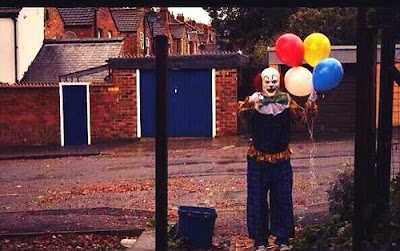 The sightings of a mystery clown may have been taking place for some time, but reports of them tied his initial appearance to Friday the 13th of September. In the British town of Northampton, the creepy clown, said The Herald & Post, was of a man with white face, red hair and sharply arched eyebrows. He appeared in two separate areas of Northampton.

(Northampton, btw, is the city of Dark Knight creator/magician/graphic novelist Alan Moore, as noted by RPJ.) 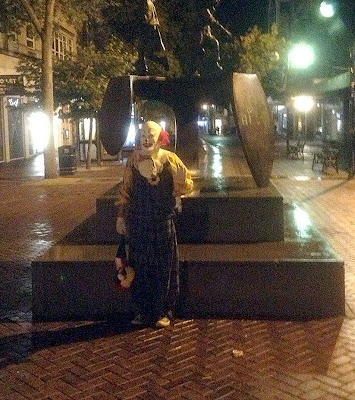 The Independent compared his appearance to that of Pennywise from Stephen King's film IT. Staring at people, he's been reported holding a clown teddybear and at other times, balloons. 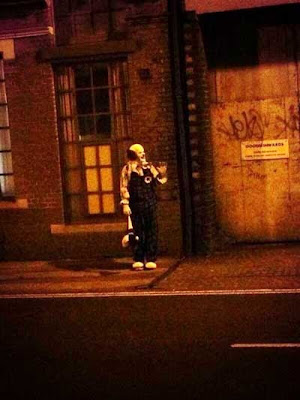 One female resident of Northampton told the Inquisitr that the clown knocked on her door and offered to paint her window sills.


Have there been copycats? The Northampton Chronicle said that two "teens" dressed as clowns knocked on a resident's door and asked if they could paint her window sills—though they had no paint or brushes.

Over at Dangerous Minds, a comment maker has left this keen observation:

Paul Screeton, in his Folklore Frontiers Facebook page has posted the following information:
"The Northampton News and Post has pointed out that a short mockumentary posted to YouTube in May this year, about a clown in Northampton, may hold at least part of the answer:
The writer and director of the film, Alex Powell, has stated beneath the video that he is not the Northampton Clown. But there seems to be some link, as the clown costume looks to be the same in both instances - and more provocatively, from 12:05 to 12:10 in the video the same garage door is shown as in the background of some of the recent photos of the clown."
The You Tube video referred to is this:
https://www.youtube.com/watch?v=epZt-spAGC8.
Mmm...

Paul Screeton, in his Folklore Frontiers Facebook page has posted the following information:
"The Northampton News and Post has pointed out that a short mockumentary posted to YouTube in May this year, about a clown in Northampton, may hold at least part of the answer:
The writer and director of the film, Alex Powell, has stated beneath the video that he is not the Northampton Clown. But there seems to be some link, as the clown costume looks to be the same in both instances - and more provocatively, from 12:05 to 12:10 in the video the same garage door is shown as in the background of some of the recent photos of the clown."
The You Tube video referred to is this:
https://www.youtube.com/watch?v=epZt-spAGC8.
Mmm...

While doing interviews for writers last week I noticed one writer had a clip from a 2006 article in The Altus (OK) Times. It was headlined "It's her life's calling." It was about a woman in Altus whose life is as a clown. The writer then wrote this disturbing paragraph about the clown's past:
"Back in the late 1970s, Roberts lived in the same area with the notorious “Serial Killer Clown” otherwise known as John Wayne Gacy. Gacy is believed to have killed and sexually assaulted 32 boys between 1976 to his arrest in December 1978. Gacy entertained local kids dressed as a clown.

Roberts’ son and a neighborhood friend wanted to go work for Gacy, but she did not get a positive vibe from him

and would not allow her son to work for him.

Because of Gacy's heinous actions, clowns everywhere got a bad rap and people still fear clowns to this day.

Roberts uses her intuition as a mother to calm any fears a child might have in her presence.

“I tell the kids I am a real person and I went to school to look like this. To the ones that are afraid, I say, ‘I'm just

like your mama, I'm a mama clown, only I wear too much make-up,'” she said with a smile."

I thought of this not so much due to this article but because a friend, who is also a writer, randomly shared a story about an encounter sds thirteen-year-old in NORTHAMPTON township (now part of Cuyahoga Falls, Ohio)in '78 or '79. While running away from home and walking down rural Bath Road, a man in a van very persistently tried to get him in his van. My friend escaped, but barely. My friend later found out that Jeffrey Dahmer as living in neighboring Bath, Ohio at the time ...

This commentator at Dangerous Minds made relevant observation: In the novel IT by Stephen King --published in Sept. 15 1986-- the clown Pennywise is said to reappear every 27 years.

The newspaper reported: "He doesn't juggle. He doesn't twist balloons into animal shapes. He just stares."