The Grinning Man has returned.

To our consciousness. To our awareness. To reality, via new crime reports.

John A. Keel loved tongue-in-cheek names, monikers collecting concepts, and subtle humor in his writings. He felt he was merely following in the literary tradition of American intellectual writer Charles Fort.

Keel saw himself as a Fortean, first and foremost, during his early days of writing about the unexplained. His 1970 book, Strange Creatures from Time and Space, is a tome full of such names. Take, for example, his chapter "Creatures from the Black Lagoon." Keel tackles swamp creatures then filtering through the newsclippings he saw coming across his desk.

"We shall call him the Abominable Swamp Slob, or A.S.S. for short," wrote Keel.

The name hits one like a ton of bricks, in its subtleness. To Keel, he was trying to be funny, even if perhaps going a bit overboard with the coined invention.

"A.S.S." was classic Keel, and, of course, never caught on among Forteans, let along cryptozoologists. Keel tried out other names in SCFTAS: Winged Weirdos, Man-Birds, Bedroom Invaders, and the Incomprehensibles.

A name that is often wrongly credited to Keel, "Men in Black" was not actually first used by him. As Jerome Clark personally told me, regarding the question of origins: "It is my view that 'men in black' were what Gray Barker wrote about, and that's what he called them. Keel coined the acronym 'MIB' -- different from Barker's enforcers in being otherworldly in appearance and behavior."

(Tall, blond aliens, btw, are not merely a thing of the past. Just read this new overview of a recent case from the Red Dirt Report.)

One Keel-invented appellation that may be in for a renewal of interest and examination is the Grinning Man.

It was Keel's style to collect his thoughts with umbrella terms, and he did thusly in his Chapter 14 of Strange Creatures from Time and Space, which he entitled "The Grinning Man."

The name was self-explanatory. A large, over-six-foot tall man, with a huge smile, was detailed by Keel from an October 11, 1966, sighting personally investigated by Keel, fellow author James Moseley, and actor Chuck McCann. 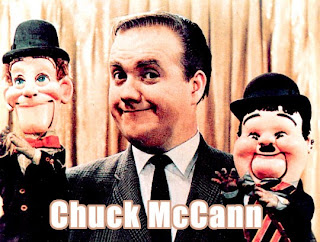 What some who read Keel don't seem to realize is that SCFTAS is not an encyclopedia of cases, but merely an overview, an attempt to begin a sense of witty Fortean classification to the damned. When Keel wrote "The Grinning Man," he came up with an all-too-obvious name for stories of smiling giants. His chapter is not definitive, but if one investigates a case, the researcher-writer tended to share those stories first. Such is the case in Chapter 14.

The October 11, 1966, Elizabeth, New Jersey, sightings of a Grinning Man by James Yanchitis and Martin "Mouse" Munov is mentioned because Keel and his associates looked into it. That is also why Keel shared the Indrid Cold tall tale too.


"The man was over six feet tall, they agreed, and
was dressed in a sparkling green coverall costume that shimmered and
seemed to reflect the street lights. There was a wide black belt
around his waist." The boys also said "He had a very dark complexion,
and little round eyes...real beady...set far apart." The most
frightening and bizarre aspect of the encounter is the fact that "They
could not remember seeing any hair, ears, or nose on this figure." ~ John A. Keel, from Strange Creatures from Time and Space

A critic wrote recently of Keel's examination of this phenomenon: "So who is the Grinning Man? In point of fact, he's really only the title of Chapter 14 in Strange Creatures from Time and Space."

That is correct. And this is how names used begin. Merely as names for entities and titles of chapters. What they become culturally, folklorically, and institutionally, after that is up to forces far beyond the author.

Keel used this chapter to throw in cases which today are labeled "Shadow People" or "Checkered Shirted Ghosts." Every incident has its place in history, culture, and time. Keel was trying to have fun with the Grinning Man, and some people have taken him too seriously, that's for sure.

But Keel gave a hint of the darker side of the Grinning Man reports too. On page 184 of his book, Keel shared a case from Springdale, Arkansas, for September 6, 1969. A "man" stared into the bedroom window of Mrs. Barbara Robinson, and the local police said "the man" would have had to be seven feet tall. Another case on the same page told of a Spring 1966 encounter with a very tall man "with his sweater pulled up over his head" with very pale hands with extraordinarily long fingers.

Sightings are sightings. Nothing more. But the folkloric direction they point to often end up as Grinning Men, Bedroom Invaders, Men in Black, or, nowadays, as Slender Men. (Needless to say, the overlap between the Grinning Man and the Joker is not to be ignored.)

Let us take what happened a few months ago in Loveland as merely a reflection of what kinds of stories Keel would gather if he were alive. Oh, no, I do not mean Loveland, Ohio, known for its Frogman reports. The Loveland of which I talk is in Colorado, infamous in its recent past for teen suicide clusters and school shootings.

On Monday, June 10, 2013, Loveland, Colorado, police were on the search for "a grinning man who grabbed a 12-year-old girl in a Safeway parking lot."

Police issued a composite sketch of the suspect (shown at the top) in the failed kidnapping incident, which happened at Wilson Avenue and Eisenhower Boulevard at about 10:28 p.m. on that day. (The event mirrored the "Phantom Clown" incidents of near-abductions.)


The victim told police she left the store to get some change from her parents' vehicle in the parking lot.  She said the suspect was riding by on a bicycle and grabbed her wrist. The man let go of her when she screamed. Police said the girl locked herself in the vehicle and the man rode away. The suspect is described as a white man in his early 20s, with shaggy brown shoulder-length hair.  He was wearing a white baseball cap backwards and a white T-shirt. The man was riding a white, small-framed mountain-type bicycle with a bell on it. The girl helped police develop a composite sketch of the suspect. Source.

Some things still haunt the netherworld of crime and occult happenings. Be forewarned if you take such trends lightly.

The Grinning Man is still out there, and the late John A. Keel is smiling somewhere.

Note: John A. Keel's Jadoo and Operation Trojan Horse are back in print.
Posted by Loren Coleman at 12:03 PM

What personally fascinates me about the Grinning Man, as a Fortean & folkloric entity, is how an expression intended to express friendship & lightheartedness does the complete opposite. It's a reminder that the polarity of forces can switch when taken to the limit.

Hmm. I don't know what the hell I'm talking about...

This was one of the stranger things Keel wrote about. Did he make it up? I think not, but he may have pushed the truth a bit. The grinning man has been seen all throughout history, the trickster, something Keel knew and wrote about. Possibilities are this was an individual on drugs or just deranged but the truth may never be known.

Possibilities are that this was an individual on drugs or just deranged. The truth may never be known. Keel liked to push the truth a bit but the Grinning Man always fascinated and terrified me. The Trickster, as Keel wrote in Operation Trojan horse, was here, is here and will always be here, wether we see him or not and the few who do are forever changed.

The phrase "saw this and thought of you" sounds horrible in this regard, but there was a new Joker-related crime:
http://www.dailymail.co.uk/news/article-2411626/Dale-Pipe-Why--What-crazed-Batman-fanatic-posted-Facebook-stabbing-stranger-13-times-carving-Joker-face-skin.html

"he came up with an all-too-obvious name for stories of smiling giants."

Check out some yt vids (here's one http://www.youtube.com/watch?v=S3dtSMw7Uso) from a recent anime series called Shingeki no Kyojin/Attack on Titan - it features giants attacking a medieval walled human settlement and most of these giants all have mostly stupid grins on their faces just like in that sketch.

spoilers: having to do with red pill junkie's comment, in the last episode one of their comrades is revealed to be someone who can apparently turn into one of the giants. The protagonist can do this too although we don't understand how yet, and his giant also has a grin on his face mostly. (he's the one carrying the boulder in the video.)

Made a quick post with images and a video that illustrates the creepy similarity between the sketch and the giants at my blog Loren, check it out http://dedroidify.blogspot.be/2013/09/synchromystic-grinning-man-via-twilight.html

The net effect of the event in LOVELAND at a SAFEWAY lot is to bring to public consciousness the Irony and the Paradox of a place with names suggesting such qualities being located in a state where children murder each other and politicians who try to regulate the weapons frequently used in such murders are driven from office.
The Joker is the Heyokah clown, the one who reverses everything to Force Comsciousness.

I thought of Lewis Carroll's "Cheshire cat," disappearing and leaving behind a grin. Although last night was a "Supermoon," (could partially explain the bizarre dreams I had, awaking me at 3:11 a.m. - again), the night leading up to the Fukushima catastrophe in Japan (on 3/11/11) had what I dubbed a "Cheshire moon." http://www.reddirtreport.com/red-dirt-news/anti-war-voices-are-raised-rally-peace-oklahoma-capitol

Wrong link. THis is the right one.
http://www.reddirtreport.com/general/cheshire-moon