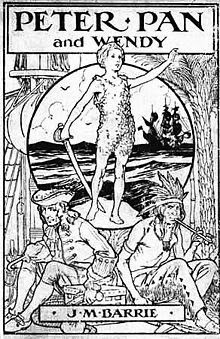 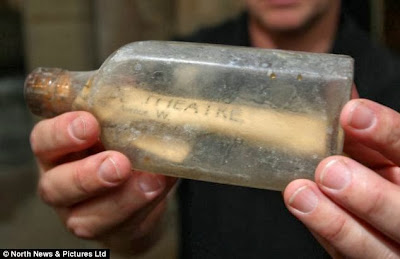 Under a flagstone at Durham Cathedral, Durham, England, earlier in September 2013, a mystery bottle containing a faded piece of paper was discovered with the names of three gravediggers, along with the message: "This grave was opened on Sunday May 11th 1913." 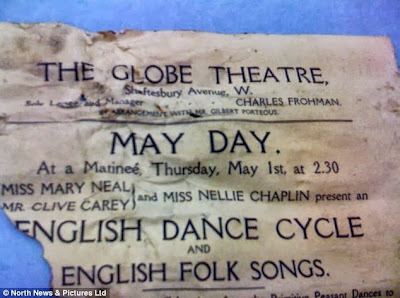 The Daily Mail noted, in part: 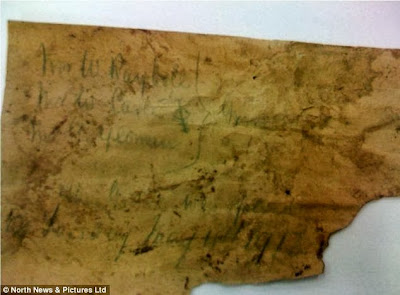 Stonemason Steve Mann unearthed the remarkably well-preserved bottle while re-laying the flagstones near the tomb of the Venerable Bede in the cathedral's 12 century Galilee Chapel on Tuesday [September 24, 2013].
The only tantalizing clue to what lay within was the words Globe Theatre, visible on the paper's letterhead....
A theatre advert - believed to be the closest piece of paper to hand when the note was made - was for a production of English dance and folk songs at the Globe Theatre, in London, Shaftesbury Avenue.
On the back were the names Mr W Wraybole, Mr W Carter, Mr G Yeoman. They were bracketed with the word Grave and what appears to be a capital D and included a stonemason mark - along with the enigmatic message.
Mr Emery said: 'The interesting thing to the advert is that it refers to the sole lessee of the Globe Theatre as Charles Frohman, the American impresario of the day. Frohman produced JM Barries' Peter Pan.'

Who were Misters Wraybole, Carter, and Yeoman?

What will be discovered about these three in the coming months? Were lost boys in the graves? Was someone looking for missing children?

The graverobbing actually links to the Globe Theatre-Charles Frohman-JM Barries-Peter Pan, and the concept of Puer aeternus. The phrase is Latin for eternal boy, used in mythology to designate a child-god who is forever young; psychologically it is an older man whose emotional life has remained at an adolescent level. The puer typically leads a provisional life, due to the fear of being caught in a situation from which it might not be possible to escape. He covets independence and freedom, chafes at boundaries and limits, and tends to find any restriction intolerable. The concept is very Jungian.

In an intriguing coincidence, one of the more significance books on Peter Pan at the end of the 20th century is Now or Neverland: Peter Pan and the Myth of Eternal Youth by Ann Yeoman (No. 82 in the series Studies in Jungian Psychology by Jungian Analysts). 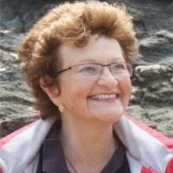 Ann Yeoman, former Dean of Students at New College, University of Toronto, as mentioned on her academic biography, was born and raised in Devon, England, on a farm adjoining cliffs that overlooked the English Channel, a landscape which she says inspired her lifelong interest in the alternative worlds of the literary fantastic.

She decided to complete the training program in Analytical Psychology at the C.G. Jung Institute in Zurich, Switzerland. She graduated as a Jungian Analyst in 1997. Her Zurich thesis was on a theme and interest that had been prevalent throughout her life: the genesis of fantasy figures and the symbolic role they play in our everyday lives. Ann turned her thesis into a book entitled Now or Neverland: Peter Pan and the Myth of Eternal Youth, published by Inner City Books (1998), which offers a psychological perspective on that popular literary icon, Peter Pan.

Until recently, Dr. Yeoman was the Director of New College's Program in Paradigms and Archetypes, and teaches the Jungian Studies courses offered in the program. She recently moved to her homeland in South Devon, England, where she continues her private practice as an analytical psychologist (Jungian Analyst). 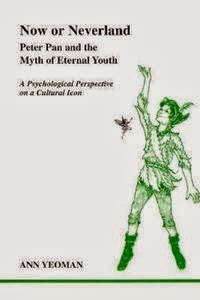 Now Or Neverland offers a comprehensive overview of the eternal boy syndrome from its roots in mythology to present day psychological interpretations, including a detailed study of its twentieth century depiction by J.M. Barrie in his famous play and novel.

Theo Paijmans shared the following in a past comment:


As for the Peter Pan connection, study the symbolism of Peter Pan as 'the boy who wouldn't grow up' and his gang of 'lost boys' who were 'forgotten by their parents'. The hooks were these tragic children were found hanging from, a reference to Peter Pan's arch nemesis Captain Hook.
J.M. Barrie, the author of Peter Pan, lets him say this about death: "To die will be an awfully big adventure". One author, Kevin Orlin Johnson, has argued that the Pan stories are in the German-English tradition of the Totenkindergeschichte, the "tales of dead children".
And then there is Peter Pan's mythical realm Neverland, the name also given to Michael Jackson's ranch which, as some allege, is a place where one of the darkest kinds of violence against children was been performed.

As we explored before (see The Peter Pan/Hook Deaths), something strange is going on, and it has been for decades.
Posted by Loren Coleman at 10:21 PM

I know it's a bit of a stretch, but I still find it a nifty little coincidence that the paper was an ad for a May 1st celebration--the day after Walpurgis Night, when graves were said to open and the dead walked the earth.

It'll be interesting to see if they ever find a clue what this message was all about.

My two sons are obsessed with the Peter Pan story. My youngest always refers to the crocodile - "Tick Tock" - and does his best "Arrr" pirate impersonation. And their father? Well, I've been on a major Jungian trip myself. The book I'm reviewing this week is "Missing 411" about adults and children who disappear in our national parks. There is the suggestion that Sasquatch may be to blame, but it is not entirely clear.