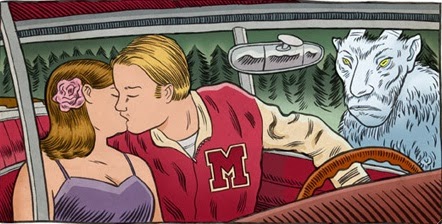 After reading "Peter Pan, Graverobbing, and Lost Boys" and "The Peter Pan/Hook Deaths," the following thoughts were shared by a correspondent: 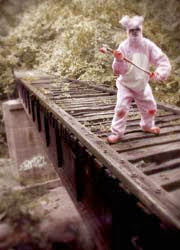 I couldn't help wondering if there could be any connection between these
cases of children found mysteriously or suspiciously hanged from hooks, and
a couple of American "urban legends" or "campfire tales" of psychopathic or
demonic assailants who allegedly hang teen-agers from bridges in wooded
areas. One cluster of such tales concerns a railroad trestle in Fairfax
County, northern Virginia, called "Bunny Man's Bridge," and attributes the
alleged hangings to the "Bunny Man," supposedly a psychopathic killer
(either an escapee from an institution for the criminally insane, or a
one-time teen-age boy gone berserk) wearing an Easter Bunny costume. The
other cluster involves a highway overpass over Sweet Hollow Road in
Melville, eastern Long Island, and blames the alleged hangings on the
spirits of supposed escapees from a burnt-down local asylum. In neither
the "Bunny Man Bridge" nor the Sweet Hollow Road cases are there any actual police records of people actually ever been found hanged from the bridges in question nor of unsolved missing teen-ager reports from the respective local areas. Likewise, neither in the Sweet Hollow Road nor the "Bunny Man Bridge" cases is there any historical record of any burned-down or closed-down institution in the area such as those from which the alleged
perpetrators supposedly escaped. I've always wondered myself if there could
be some sort of "copycat" historical connection between the "Bunny Man
Bridge" and Sweet Hollow Road legends. ~ T. Peter Park.

The links do not end there. 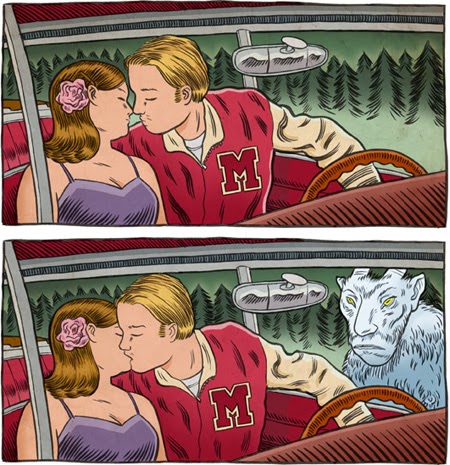 I have written of the Bunny Man often in books and blogs (e.g. "Donnie Darko and Bunny Men"). As Wikipedia correctly summarizes, "Loren Coleman,...in the book Weird Virginia, which has a section on the Bunny Man, sees a direct association between the legend of Bunny Man and that of the Goatman of nearby Maryland." (For more on Goatman and the illustrations above, see here.) 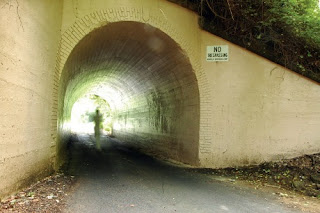 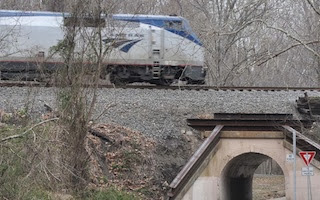 Posted by Loren Coleman at 9:12 AM

Sweet Hollow Road in Melville / West Hills, Town of Huntington on New York's Long Island runs along the east side of a morainal hill known locally as Mount Misery. This is the same Mount Misery which appears in John Keel's "The Mothman Prophecies", the place on Long Island where the intelligence (intelligence agency?) or entity or whatever was in communication with Keel in the 1960's directed him to go to make contact while in New York. As stated in the post, there is no record of a mental hospital, school or similar institution on Sweet Hollow Road, Mt. Misery or the immediate vicinity. There is, however, Pilgrim Psychiatric Center, formerly known as Pilgrim State Hospital, in Brentwood, NY about 10 miles to the east. This was a massive institution from the 1930s through the 1970s with documented cases of patient mistreatment, etc.

New York seems to be a particularly rich breeding ground for these kinds of urban legends. Fifty miles to the west of Melville/West Hills, in Staten Island, you can visit the campus of the College of Staten Island, on the site of the former Willowbrook State School, an institution for children. The documentary 'Cropsey' covers the urban legend of the hook-handed killer that's well-known in Staten Island.