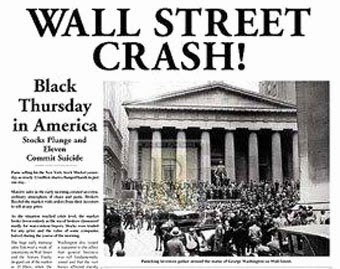 October 24, 2008, was "Bloody Friday," which saw many of the world's stock exchanges experience the worst declines in their history, with drops of around 10% in most indices.

It has been an active week, in general. On October 24, 2013, it was a "Bloody Thursday" of the usual violent kind of late. The CVS is located at 6750 Wilkinson Blvd, Belmont, North Carolina.

A hostage situation developed for many hours during a robbery attempt in North Carolina. Police identified the suspect in that armed robbery-hostage situation at CVS in Belmont, N.C., as Edward Scott Russ, 46, according to NBC News.


Police in Belmont [NC] say a gunman who was holed up inside a CVS Pharmacy has come out and surrendered to investigators.
Edward Scott Russ, 46, of Gastonia, took the three employees inside the store hostage.
Russ was charged with first degree kidnapping, two counts of second degree kidnapping, robbery with a dangerous weapon, communicating threats, two counts of assault on a law enforcement officer with a firearm and two counts of attempted first degree murder, according to Belmont police.
The incident began around 2 a.m. at the CVS Pharmacy on the 6700 block of Wilkinson Boulevard, according to Belmont police.
Police say Russ walked into the store with a SKS scope mounted rifle in an attempt to commit an armed robbery.
Two officers arrived on scene and the gunman opened fire.
10 agencies are on scene with SWAT teams and negotiators who are talking to the man on the phone.
The three employees who were being held as hostages were released by Russ around 6 a.m.
Investigators monitored Russ using the live surveillance footage from the pharmacy cameras inside the drug store.
A two block radius around the store was cordoned off by police during the standoff.
...Russ' mother after the standoff...said it is very out of character for her son to do something like this and she just doesn't know what happened.
CVS Pharmacy released a statement in response to the incident:
"We are pleased to confirm that none of our employees were harmed during the incident in Belmont and we want to thank law enforcement in Charlotte and Belmont for their quick response and resolution. WBTV Source.

Elsewhere in North Carolina, there was an accident at the state fair. 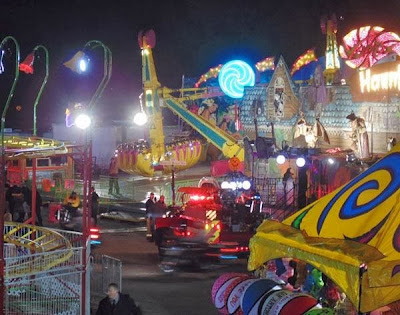 Five people were injured during an accident at the North Carolina State Fair [at Raleigh, NC] Thursday night [October 24, 2013] and two have since been released from the hospital, according to officials.
Two of the five injured sustained serious injuries after an incident on the Vortex ride behind the Expo Center, officials said.
Wake County Sheriff Donnie Harrison said the victims are between the ages of 14 and 39. Harrison confirmed some of the victims are family members. One of the injured was a ride operator, Harrison said.
Harrison asked for any cellphone video of the accident to be given to authorities.
"The ride had stopped and they were fixing to offload when it started off again. That is preliminary report," Harrison said.
An EMS source told WNCN five passengers were ejected while attempting to exit the ride. The EMS source said all five were initially unconscious but three regained consciousness.
One of the injured suffered serious head injuries. Another victim had injuries similar to a concussion, according the EMS source.
Brian Long, public affairs director with the State Fair, said the ride is located between gates 4 and 5 on the lower midway.
Long said an ambulance was on scene within a minute of the first call just after 9 p.m. Long said all five victims were transported to WakeMed by 9:37 p.m.
"This has shaken all of us," Long said. "We definitely have these folks in our thoughts and prayers."
The N.C. Department of Labor will inspect the ride and the Sheriff's Office will investigate the incident, Long said.
...
Witness Caleb Norris told WNCN he heard a crashing sound just after exiting the Vortex ride. Norris said he turned around and saw two people lying face down.
Norris also said he saw the ride operator fall to his knees and start crying.
The Vortex ride was manufactured by Technical Park International of Italy. Fair officials said this is the first time this Vortex ride has been at the N.C. State Fair.
There are two Vortex rides on the Fairgrounds while the other Vortex, located on the new Midway, has been on site for many years and is manufactured by Fabbri of Italy, the State Fair confirmed. Brian Long, the spokesman for the State Department of Agriculture, said the two Vortex rides are completely different although they have the same name. WNCN Source.

Earlier, in Tennessee, violence had visited a military base. 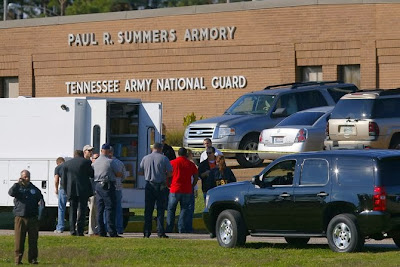 A member of the National Guard opened fire at an armory outside a U.S. Navy base in [Millington] Tennessee, wounding two soldiers before being subdued and disarmed by other soldiers, officials said Thursday.
Millington Police Chief Rita Stanback said the shooter was apprehended Thursday by other National Guard members, and that he did not have the small handgun used in the shooting in his possession by the time officers arrived. Stanback said two National Guard members were shot, one in the foot and one in the leg.
...
The Tennessee National Guard late Thursday identified those shot as Maj. William J. Crawford and Sgt. Maj. Ricky R. McKenzie. The shooter’s name has not been released.
In a news release, Guard spokesman Randy Harris said the two were shot while disarming the gunman.
Haston said all three of the men were recruiters. He said the shooter was a sergeant first class who had been in the Guard about six or seven years and that the victims were his superiors. He said the recruiters who were shot were based in Jackson, Tenn.
...the shooting happened inside an armory building just outside Naval Support Activity Mid-South. There are more than 7,500 military, civilian and contract personnel working on the base, according to the facility’s official website. The facility is home to human resources operations and serves as headquarters to the Navy Personnel Command, Navy Recruiting Command, the Navy Manpower Analysis Center and the U.S. Army Corps of Engineers Finance Center. Washington Post source.

The shooter was named on Friday. 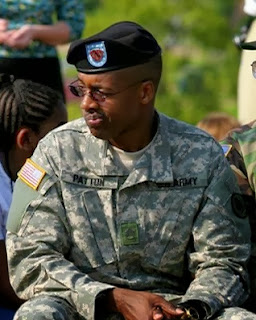 Amos Patton seen in this 2013 file photo from a local school event, has been identified as the alleged shooter in Thursday's shooting at the Tennessee Army National Guard Armory in Millington.

Patton served as a recruiter for the Army National Guard for nearly 20 years. Before the shooting, Patton's bosses had come to town to talk with him about administrative policies and procedures.
According to an Action News 5 reliable source, Patton went to his car in the midst of his meeting and retrieved a computer bag and waist pack. He then asked to go to the restroom, but the commanders insisted the computer bag remain with them. No one noticed the waist pack when Patton wheeled around and took a semi-automatic 380 pistol out, according to our source. WMCTV Source.