Richard Hatem, known for Grimm today and The Mothman Prophecies screenwriter, is directly responsible for bringing the story of the winged weirdie to theaters in 2002.

John A. Keel's book, The Mothman Prophecies, was first published in 1975.

It is hard to believe today, but people forgot about the book. Then on October 1, 1991 ­ IllumiNet Press published the first reprint of The Mothman Prophecies in decades. It is this edition that screenwriter Richard Hatem "discovered" in an old book store, and decided to get someone interested in producing a movie from the book.

This happened in the spring of 1997. Struck by insomnia one night, Richard Hatem drifted into a Pasadena bookstore. A used copy of The Mothman Prophecies almost literally fell from a shelf into his hands, as if guided to him by a "library angel," as they are called. Hatem soon was engaged in reading Keel's book through the night. The next day, he contacted John Keel, and immediately began work on the screenplay that Lakeshore Entertainment bought in 1998.

The movie, steered by Richard Pellington, then known for his conspiracy thriller, Arlington Road, directed The Mothman Prophecies and it hit theaters in 2002.

For Halloween in 2013, Huff Post published a list of recommended Halloween horror movies, and included The Mothman Prophecies among their top 13.

The movie is a creepy one to re-view again, and I recommend everyone do so.

Watch for some of these strange errors and name game puns. For instance, the clock radio in character John Klein's motel room reads: 6:14. It's a biblical reference to John Chapter 6 verse 14, which reads, "This is indeed the prophet who is to come into the world."


Continuity and geographic errors usually happen in movies. It is just curious to notice which ones pop up in this film.

In the film, you can see an obvious Pittsburgh landmark (the Masonic Temple, home of the Pitt Alumni Association) appearing in the background of scenes supposedly set in Washington, DC, and Chicago.

The Richard Gere character passes a sign for Maine Avenue as he leaves Washington, driving from Memorial Bridge to Interstate 95. Maine Avenue is in the opposite direction and there are no signs for Maine Avenue on any of the roads he could have taken to get to I-95.

During the Christmas tree lighting festivities, the door of the fire truck reads "Saxonburg" (a town near Kittanning in Pennsylvania where the scene was filmed) not Point Pleasant (where it is set).

On Klein's drive from Point Pleasant to Chicago, a glimpse of an exit sign for "New Kensington" can be seen. There is no "New Kensington" between West Virginia and Illinois, but there is one near Pittsburgh, where the movie was shot.


Released to theatres in 2002, “The Mothman Prophecies” follows John Klein, played by Richard Gere, as he leaves his Washington newspaper job to investigate sightings of winged creatures, referred to as “Mothman,” in a small West Virginia town. The film claims to be based on actual events that occurred in Point Pleasant, W.Va., between November 1966 and December 1967. Loren Coleman, founder and director of the International Cryptozoology Museum in Portland, Maine, was a consultant during the production of “The Mothman Prophecies.” According to Coleman, the film, which is based on the 1975 book of the same name by parapsychologist John Keel, is a fictionalized narrative of actual events. “‘The Mothman Prophecies’ is based in reality, but the film is [director] Mark Pellington’s docudrama/fictionalized narrative motion picture of the events,” Coleman told HuffPost. “The characters … were created from parts of the personality and experiences of … Keel. Even the character names are formed via movie scriptwriters as puns, for example [Alexander] Leek [is] Keel backwards.” 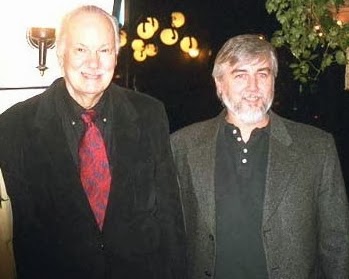 Keel and me. Photo by Patrick Huyghe.

John Keel thoroughly enjoyed the film, and was touched to see his name on the screen. He never thought that would happen to him, he told his friends (like me). He also enjoyed the little bit of money he earned from the studio, although this late in his life, it didn't change his lifestyle. He was having major health issues with his eyes, and I was asked on board to help him out with the promotional publicity. John and I appear as the "Mothman experts" in Search for the Mothman, the documentary bundled with the deluxe versions of the film. But, of course, John was the man. It will always be his film, to me.

The writers had fun with the script, and the film is a series of in-jokes. For example, John Alva Keel was born Alva John Kiehle, and the first “John Keel” character in the movie is named “John Klein.” Alan Bates’ character has a similar name game.

In 2002, I wrote a discussion, “The Mothman Prophecies: ‘Gordon Smallwood’ and Some Strange Happenings,” of the name game in the film for a science fiction site.

Here are some excerpts:

In the new motion picture, The Mothman Prophecies ( based on the book of the same name by John Keel), chemical plant worker “Gordon Smallwood” (Will Patton), is deeply upset by late-night visits, he thinks, from reporter “John Klein” (Richard Gere). ”Smallwood” also believes that an entity named Indrid Cold is communicating with him, and this is slowly driving him, well, to turn a phrase, batty. ”Gordon Smallwood” is loosely based on contactee Woody Derenberger, who reported encounters with an Indrid Cold in West Virginia during the period of the Mothman sightings there in 1966-1967. This is all rather obvious, and the “Smallwood” and Woody link is not hard to see.
Right after the movie’s opening, Jerome “Jerry” Clark, author ofThe UFO Book, posted the following on an online UFO group: ”I wonder how many of you who’ve seen the movie caught the deep-inside-the-ufological-beltway use of the name ‘Gordon Smallwood’ for the Will Patton character?”
No one answered, but many were interested in learning what the in-joke was all about.
Jerry Clark explained: ”Gordon Smallwood is a pseudonym Gray Barker [the late West Virginia ufologist, and friend of John A. Keel] used for Quebec ufologist Laimon Mitris, who allegedly was visited by a man in black. See chapter 13 of They Knew Too Much About Flying Saucers. Barker writes, ’I would like to know someone by the name of Gordon Smallwood. The name in itself sounds honest and reputable. If there are any Gordon Smallwoods reading this book, let them rest assured the name used here is an invention. But let them write to me for I would like to know people with such a name.‘”
The Mothman Prophecies movie has many layers of meanings and a few inside jokes: from the Fortean number game turning up in the night visits related by “Gordon Smallwood”, the selection of names (e.g. Leek = Keel), and even on-camera appearances. Notice the imposing figure of the bartender at the Marriott who helps the Richard Gere character with the television channels. That’s director Mark Pellington in his Alfred Hitchcock-like cameo.

Pellington was also the voice of Indrid Cold during the phone call.

Mark Pellington, furthermore, occasionally added his voice under the dialogue of characters who spoke on the phone with John Klein, throughout The Mothman Prophecies. Pellington said the intention was to create the illusion that Indrid Cold could be any one of those people, and that the entire situation and all the people might actually be in Klein's head.


On October 28, 2013, the film’s head writer, Richard Hatem, posted a tweet saying, “Thanks Loren – I knew guys like you would get the jokes.” 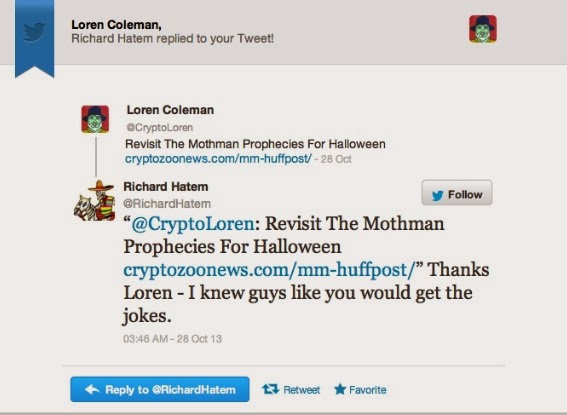 Posted by Loren Coleman at 8:11 AM

This morning, over coffee, was reading in the book "Missing 411" about the disappearance of John Wayne McKinney, age 5, on March 17, 1958 in Gallipolis Ferry, West Virginia, a few miles from Point Pleasant and of course I thought of the Mothman case and was thinking about John Keel ... and within an hour I was reading your piece ...