There was a shooting in Tulsa, Oklahoma, on the evening of October 12, 2012. You may hear little about it, as it happened among a closed ethnic group. This time of year is in the midst of the traditional three days of in-house Hmong New Year rituals, which are followed in some communities by seven days of "outside" activities.

A man walked in and opened fire at one such Hmong New Year's celebration in Tulsa, Oklahoma, on October 12th, Saturday night, injuring five people of the 400 there, local police said.

Authorities don't know what caused the man to begin shooting inside the Green Country Event Center, near Highway 169, at 12000 East 31st Street.

Two Hmong celebrating (between 30-60) were hit in the upper body, while the other three were struck in the arm and leg, said Tulsa Police Captain Mike Williams. One person probably will lose the use of the lower leg.

Nhia Vang, 75, told reporters that the gunman opened fire six feet away from him after a toast. One bullet went through his shirt, but he was uninjured – although the police took the garment as evidence, the Tulsa World reported.

One suspect was said to be firing from a car, with another driving. A passenger was observed changing clothes, then throwing his hoodie and a gun from the car.

Police believe the passenger, 19-year-old Ming Mee, was the shooter. Both he and the driver, 21-year-old Boon Mee, were arrested. A 40-caliber semi-automatic handgun was recovered.

The Hmong (seen in traditional dress above, in Vietnam, 2004) are an Asian ethnic group from the mountainous regions of China, Vietnam, Laos, and Thailand. American soldiers would characterize them as the "hill people" of the Vietnam War, and understand them to be loyal allies. 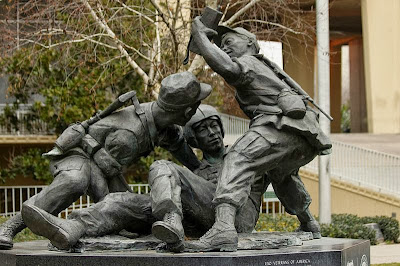 This memorial, in honor of Hmong service, is in front of the Fresno County Court House, in downtown Fresno, California. (Photograph credit: Prayitno.)

As CNN noted in reporting the Tulsa shooting, "The Hmongs are an Asian ethnic group. There are an estimated 210,000 Hmongs scattered across the united States. They were an important U.S. ally during the Vietnam War. Many fled the Communist government when combat ended."

In the 1960s and 1970s, many Hmong were secretly recruited by the American CIA to fight against communism during the Vietnam War. After American armed forces pulled out of Vietnam, a communist regime took over in Laos, and ordered the prosecution and re-education of all those who had fought against its cause during the war. Whilst many Hmong are still left in Laos, Thailand, Vietnam, Myanmar, and China (which houses one of the biggest Hmong populations in the world, 5 million), since 1975 many Hmong have fled Laos in fear of persecution, coming to the USA, as well as other Western countries.

This Hmong shooting comes in the wake of the Vietnam-styled self-immolation of Vietnam vet John Constantino on the National Mall in Washington D.C., which took place on the October 4th anniversary of the beginning of the US bombing of Cambodia. 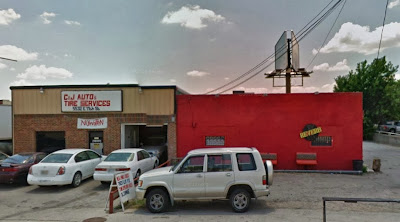 Elsewhere in Tulsa, another multiple shooting occurred on Saturday, October 12th, due to a fight at a night spot (Reverb, above, formerly the Dragon's Lair, below). 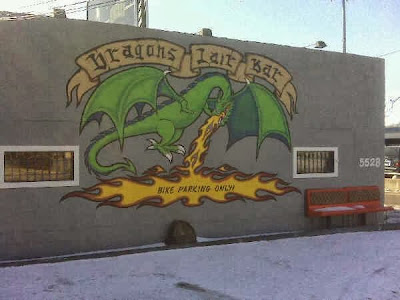 (Dragon exists in Hmong folktales and many Hmong believe dragon actually exists. There are two types of dragons according to the Hmong elders: the River Dragon and Land Dragon. River Dragon are considered the evil one while Land Dragon are considered a luck if you see them. There is absolutely no known link between the Hmong New Year shooting and the former Dragon's Lair shooting. The synch is merely being pointed out.)


Two men shot at Reverb were pronounced dead following the late night incident that left two others injured. According to a police report, a fight broke out in the parking lot of the after hours club around 3 a.m. near 5500 E. 11th Street.


A 21-year-old Marrico McGuire was transported to a Tulsa hospital and was later pronounced dead at the hospital as a result of his injuries. A second unidentified victim has since died. This individual's name online has been reported to be "Dave Muse."

Additional temporal note:  The Chicago Marathon occurs on Sunday, 10-13-13, the first major American marathon since the Boston Marathon bombing almost exactly 6 months ago. Reportedly, security is extremely heightened at that event.
Posted by Loren Coleman at 8:10 AM