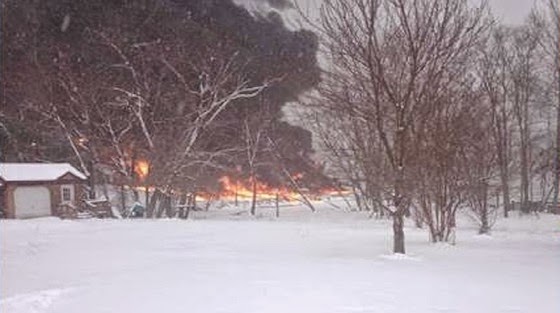 A freight train in Fayette County, southern West Virginia, carrying crude oil derailed on February 16, 2015. The derailment caused an explosion that set at least one house on fire. The man in the residence, identified as Morris Bounds, escaped in his bare feet without serious injury. This took place near Mount Carbon, described as being along WV Route 61, near Armstrong Creek Road. This area is also known as Powelltown Hollow.

Several of the train cars spilled into the Kanawha River, east of Montgomery, and caught fire, prompting an evacuation order for a mile-and-a-half around the area where the train skipped the tracks, according to NBC affiliate WSAZ.

At the other end of the Kanawha River, 80 miles away, is Point Pleasant, a city in and the county seat of Mason County, West Virginia, USA, at the confluence of the Ohio and Kanawha Rivers. The town is known for sightings of Mothman in 1966-1967, and the collapse of the Silver Bridge on December 15, 1967.

The Kanawha River is a tributary of the Ohio River, approximately 97 mi (156 km) long, in the State of West Virginia.

Fayette County was created by Act of the Virginia General Assembly, passed February 28, 1831, from parts of Greenbrier, Kanawha, Nicholas, and Logan counties. It was named in honor of the Marquis de la Fayette, who had played a key role assisting the Continental Army during the American Revolutionary War. Virginia previously had a Fayette County, which was lost to form the new state of Kentucky. Accordingly, in the State records of Virginia, there will be listings for Fayette County from 1780–1792 and Fayette County from 1831-1863. Neither location is still located in Virginia and despite naming a county after him twice, Virginia no longer has a county named for the Marquis de la Fayette.

Fayette County was home to a disastrous mine explosion at Red Ash in March 1900, in which 46 miners were killed.

For more on the "Fayette Factor," see here.
Posted by Loren Coleman at 4:54 PM

Don't forget Bill Hicks, the notoriously angry comedian who often spoke of the apocalypse and his profound anger at the mob.

Matthew - please check the posting on which you are commenting. This Hicks one apparently is for the Chapel Hill thread, but as moderator, I can't move it...only you can repost it there.
Thanks.

Loren, I've meant to tell you this for awhile and I guess now is the time... I'm a born-n-raised West Virginia boy from Fayetteville. I lived there from 1977 until 1995 when I went away to college in Shepherdstown, WV. My family is still there and I was just back for Christmas. I would love to do a Media Monarchy interview w/ you about the Fayette Factor. Thanks as always!