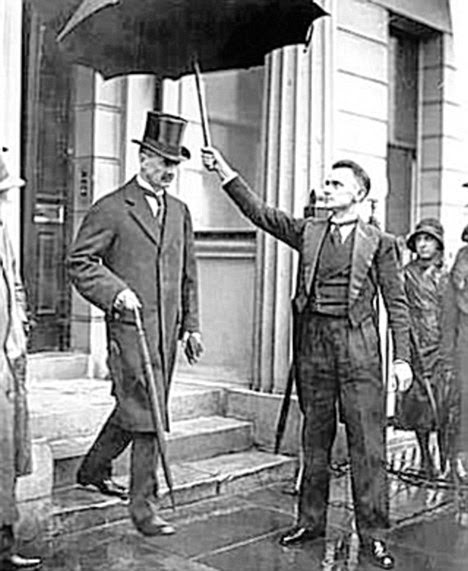 In an incident occurring on January 28, and uploaded on February 1, 2015, a Chinese woman with an umbrella is making the rounds of YouTube. She takes on three guys who are being disruptive at a Chinese restaurant. Said to be real and not fictional, it has been highlighted in the media, of late, such as here.

Let's look at a few other umbrella people. 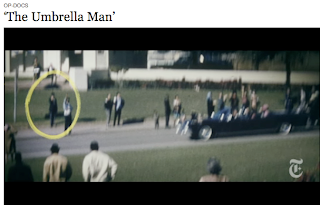 First up, some scenes from a short Errol Morris documentary that takes a skeptical view of the reports of a mystery man, the so-called "Umbrella Man" at Dealey Plaza, Dallas, Texas, at the site of the John F. Kennedy assassination, November 22, 1963. 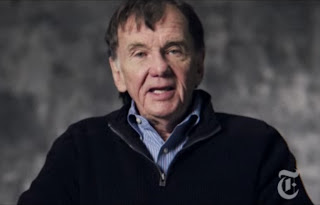 In December 1967 John Updike was writing “Talk of the Town” for The New Yorker. And he spent most of that “Talk of the Town” column talking about the “umbrella man.” He said that his learning of the existence of the umbrella man made him speculate that in historical research there may be a dimension similar to the quantum dimension in physical reality. If you put any event under a microscope you will find a whole dimension of completely weird, incredible things going on. It’s as if there’s the macro level of historical research where things sort of obey natural laws and the usual things happen and unusual things don’t happen. And then there’s this other level where everything is really weird. 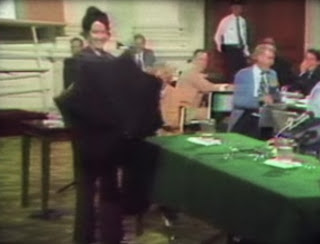 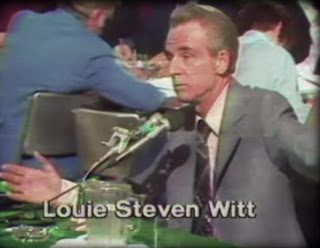 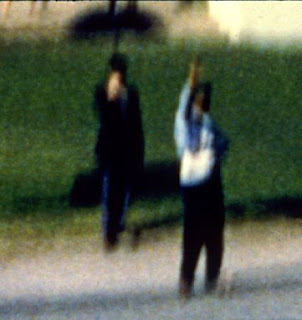 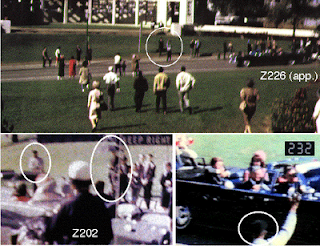 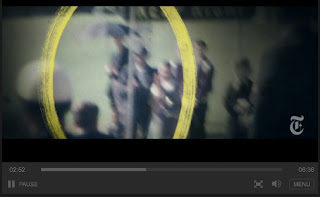 As you’ll recall, the New York Times’ preferred explanation for why a man opened an umbrella on a sunny day, just as JFK’s limousine passed—and just as the bullets poured into the car— was an entirely benign one. Strange, but benign.

Recap: Fifteen years after the assassination, as the special House Select Committee on Assassinations was taking the first serious look at the death of JFK (and others), a man came forward to identify himself as the so-called “Umbrella Man” and to explain his bizarre behavior.

The man, Steven Louie Witt, said that, no, it was not someone signaling the shooters, and no, it had nothing at all to do with the assassination. Instead, he said, it was a message against appeasement of enemies. He hoped to signal his disapproval of what he considered JFK’s forbearance of America’s enemies.

How to signal that? Here’s where it gets complicated. Witt claimed he held up the umbrella as an icon symbolizing the treachery of Neville Chamberlain, the 1930s British prime minister. Chamberlain, who tried to preserve peace with Hitler by ceding him a part of Czechoslovakia (the Sudetenland), became a reviled symbol of appeasement. The self-described Umbrella Man said that he had been identifying appeasement with Chamberlain’s trademark umbrella. The connection to JFK came via his father, Joseph P. Kennedy, ambassador to Britain at the time and an anti-war isolationist.

Only a very unusual 15-year-old American (Witt’s approximate age in 1938) would have strong feelings about a British prime minister’s behavior, and still harbor those feelings a quarter century later. It is even harder to accept that he could believe JFK, himself a young man in 1938, might “get” the message somehow via the umbrella.

Even if we are to accept that Witt really was the man pumping the umbrella on the Grassy Knoll, and even if he was cognizant of Chamberlain, and even if he did think he could get a message to JFK via the Chamberlain affair, we still have a big problem with this claim.

According to John Simkin, a retired British history teacher and textbook author who runs the historical website Spartacus Educational, the umbrella was never the symbol of Chamberlain that the “umbrella man” claimed it was.

“In Britain, there was never any association with an umbrella at all,” Simkin told me. “Everyone had umbrellas and bowlers in those days.” According to Simkin, the only proper symbol for Chamberlain and appeasement was a piece of paper. That was the document he held aloft, with Hitler’s signature to the so-called Munich Agreement—in which Hitler agreed not to seek any further territorial gains in Europe—as Chamberlain famously declared that he had secured “peace in our time.” (In this old newsreel, you can see Chamberlain hold aloft that document.)

Simkin finds the New York Times video’s assertion that the purpose of opening the umbrella and pumping it in the air to signal Munich simply laughable.

More likely, it was exactly what it appeared to be: a method of signaling shooters, perhaps that JFK had been hit, perhaps that he still seemed to be alive, perhaps to keep shooting. Although it was a sunny day, it had rained the night before, and there was a wind, so it would not have been operationally illogical to move forward with using an umbrella. The fact that the New York Times and the establishment in general have never considered the umbrella worthy of real, serious inquiry, tells us that if the umbrella waspart of a plot, it was not so bad a choice.

In the last article, I mentioned that Witt, the self-proclaimed “Umbrella Man,” worked for Rio Grande National Life Insurance in the Rio Grande building. I mentioned that the same building housed the Immigration office frequented by Lee Harvey Oswald, and the local office of the highly negligent Secret Service. I mentioned that Rio Grande wrote a lot of insurance for the military. And, separately, I noted the strong military intelligence connections to key figures connected with 11/22/63.

One thing I did not mention, but should have, was that Military Intelligence itself had offices in that Rio Grande building.

Now, all of that could be coincidence. But there’s a reason certain entities signed leases with particular landlords and not others—especially so in Dallas circa 1963 (more on this in Family of Secrets.) Source. 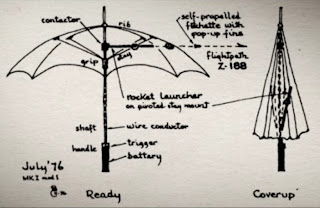 More on the skeptical view, see also this.

The real danger of a video like the one about the Umbrella Man is that it encourages people to stop questioning, stop investigating. Just laugh it all off. As many would say, "There’s no trouble here in the land of the free, the home of the brave. Nothing to see here, folks, move along, move along."


The Bulgarian umbrella is the name of an umbrella with a hidden pneumatic mechanism which injected a small poisonous pellet containing ricin. The weapon has a hollowed stalk into which the pellet neatly sits.
Such an umbrella was allegedly used in the assassination of the Bulgarian dissident writer Georgi Markov on September 7, 1978 (the birthday of the Bulgarian State Council chairman Todor Zhivkov who had often been the target of Georgi Markov's criticism) on Waterloo Bridge in London, (Markov died three days later) and also allegedly used in the failed assassination attempt against the Bulgarian dissident journalist Vladimir Kostov the same year [on August 26, 1978] in the Paris Métro. The poison used in both cases was ricin. Both assassination attempts are believed to have been organized by the Bulgarian Secret Service of the time of the Cold War with the assistance of the KGB. Source.

This is a replica of the umbrella - modified to fire a tiny pellet filled with poison - used by the KGB in 1978 to assassinate dissident Georgi Markov.

On March 21, 1981, Ronald Reagan, the new President of the United States, visited Ford's Theatre in Washington, D.C. with his wife Nancy for a fundraising event. He recalled, "I looked up at the presidential box above the stage where Abe Lincoln had been sitting the night he was shot and felt a curious sensation... I thought that even with all the Secret Service protection we now had, it was probably still possible for someone who had enough determination to get close enough to a president to shoot him."
On March 30, 1981, only 69 days into the new administration, Ronald Reagan, his press secretary James Brady, Washington police officer Thomas Delahanty, and Secret Service agent Timothy McCarthy were struck by gunfire from would-be assassin John Hinckley, Jr., outside the Washington Hilton Hotel. Although "close to death" upon arrival at George Washington University Hospital, Reagan was stabilized in the emergency room, then underwent emergency exploratory surgery. He recovered and was released from the hospital on April 11, becoming the first serving U.S. President to survive being shot in an assassination attempt. 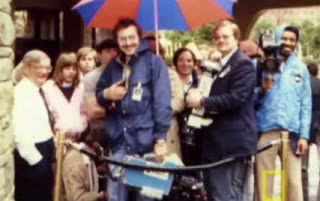 Hinkeley's face is visible in this photo, to the left of the NBC umbrella sheltering the NBC camera crew, who would soon film the attempted assassination of Reagan. 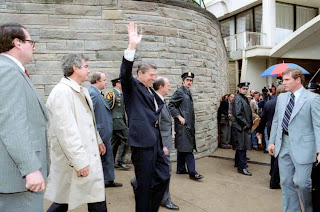 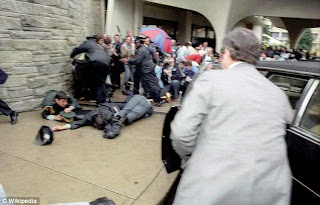 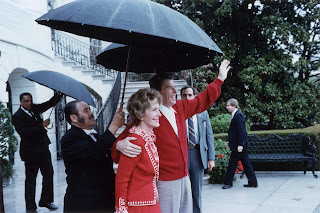 Moving along, back to the future...

An assassin armed with a poisoned-tipped umbrella is being hunted by police after killing a man - in a case bearing chilling echoes of the murder of a Bulgarian dissident on London’s Waterloo Bridge.
The 40-year-old German man died of mercury poisoning after being jabbed in the buttocks by a mystery attacker carrying the modified weapon.
The unnamed victim told police he was attacked by a slim stranger who had a sticking plaster on his face before falling into a coma.
He died on Wednesday [May 9, 2012] almost a year after the hit in Hannover, Germany. Source. 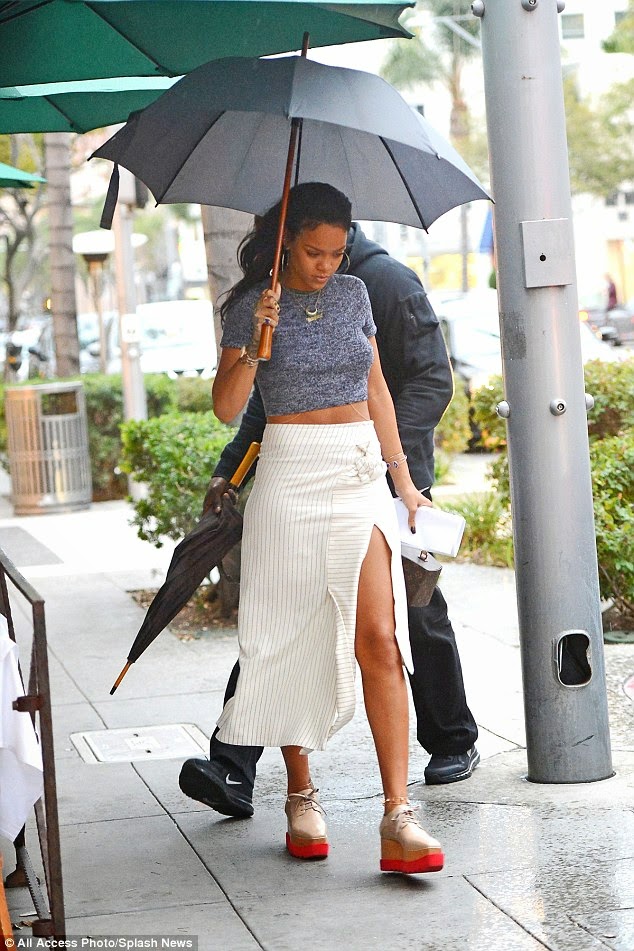 Ads are currently running on TV for the movie Kingsmen: The Secret Service, featuring Colin Farrell and an umbrella weapon used by a James Bond-style spy organization.