On Thursday, July 23, 2015, at the Grand 16, in Lafayette, Louisiana, an unidentified 59-year-old male opened fire on a crowd of viewers at Trainwreck. 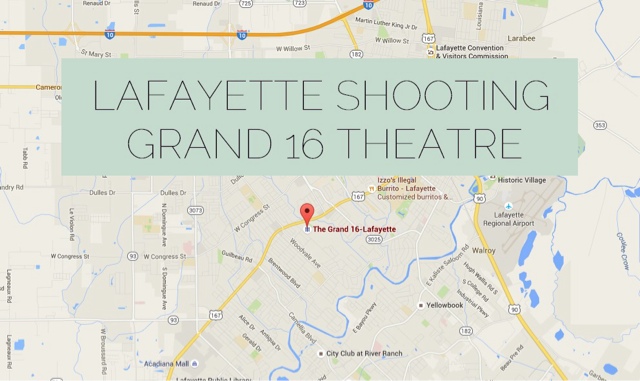 This occurred at 7:30 pm. Reportedly, 3 are dead, including the gunman. Also, apparently 7 are injured.

The name of the gunman is John Russell Houser, 59, former of Phenix City. Alabama. The last true battle of the Civil War took place in Phenix City, then known as Girard. 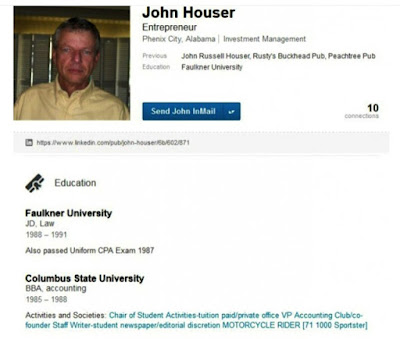 Houser is a variant on the German surname Hauser.
It has not been lost on sync thinkers that "Houser" is technically another evolved variation of the same root name that gives us "Holmes." House/home.

The use of the terminology of "drifter," as a law enforcement and media description for the late Lafayette theater shooter John Russell "Rusty" Houser, appears to be rather unconsciously calculated. What it does is to reinforce the notion that Houser is a "lone gunman," without connections. Within synchromystic circles, the name game thoughts on Lafayette's Houser/Hauser origins ("house") and Aurora's Holmes etymology ("home"), therefore, are in stark contrast to the definition of a "drifter": a person who is continually moving from place to place, without any fixed home or job.

CNN Wolf Blitzer is reporting shooter John Houser was "very political," flew Confederate and Don't Tread On Me flags in his yard.

Correspondent Robert Phoenix, who alerted me to the Phenix City, Alabama, link to the Lafayette shooter, also pointed out this intriguing point: "Roof and Houser."

Also, "Notice they say gunfire broke out at '7:30pm'. 7 and 3 are consistent here. Although I've only read this report so cannot say whether these are the widely reported numbers."

For more on the shooting, see here.
And: http://abcnews.go.com/US/multiple-victims-lafayette-louisiana-theater-shooting/story?id=32653062
Posted by Loren Coleman at 1:12 AM

A sad and shocking incident, and I pray for the families of those killed.

I was aware, as I follow this blog, that you did predict a danger of this sort of outburst by the end of June.

[Lafayette Police Chief Jim] Craft described Houser as “kind of a drifter” who was from Alabama and had been in Lafayette since early July, staying in a local hotel. Authorities have found various “disguises, basically” at the hotel room where he’d been staying.

They say "About 100 people" but they know exactly how many tickets were sold, right? But, maybe some people pre-bought their tickets online and didn't make it to the theater? Anyway, that whole paragraph with all the numbers in it just sticks out like a sore thumb.

But going back to the page, there is a video there so the news story is probably a transcript of whatever they wrote for TV so it reads weird. It reads like a fictional story because it was written for a TV audience. That's my guess.

Looked up the meaning of the middle name, Russell which essentially means 'Rusty' or "red one" being the diminutive of Rus meaning red, at least according to Wikipedia.

Then I was struck by the number people named "Charlie Russell" that Wikipedia found prominent enough to list.

Russell is a common name and just picking Russells at random on the Wikipedia page only the Thomas Russells came close the amount of Charlie Russells.

For what it is worth.

Phenix City has a history of violent crime dating back to the early 1950s, when it was a notorious center of gambling and vice that involved both Carlos Marcello and Santo Trafficante. That ended only after the implication of an Alabama attorney general in the 1954 murder of his elected successor, who had promised to clean up organized crime in the state.

Si Garrett was deeply enmeshed in the murder of Alabama’s attorney general-elect Albert J. Patterson and in the massive scandal that subsequently unfolded surrounding organized crime and government in Phenix City, Alabama. Si had supported Patterson’s opponent, and he worked hard to swing the election by reworking some tally sheets in populous Jefferson County. Garrett had tried to convince the Democratic leadership that Patterson was linked to gambling interests; but in fact it was Si Garrett who had tight connections to the Phenix City organized crime nest. Patterson was a clean government candidate, and the organized crime interests were afraid of him. Still, the vote rigging scheme failed, and after some curious phone calls placed to Garrett out of Phenix City, Albert J. Patterson was mysteriously murdered. After he became the prime target of the murder investigation, Si checked into an insane asylum in Texas to avoid prosecution. (All of that story is brilliantly chronicled in Margaret Anne Barnes’s The Tragedy and the Triumph of Phenix City, Alabama, published by Mercer University Press in 1998; alternately, for a less academic and more lurid account, turn to Gene Wortsman and Edwin Strickland’s Phenix City, The Wickedest City in America. The lazier among you can just go and pull out the classic 1955 film noir “The Phenix City Story,” directed by Phil Karlson.)

The victim's son, John Malcolm Patterson, was elected attorney general a year later and then served one term as governor of Alabama. In both those positions he was best known for his dogged opposition to desegregation. He's also remembered as the man who informed John Kennedy about the plans for the Bay of Pigs invasion before the 1960 election, an action that may have prevented Richard Nixon from pulling an October Surprise and thereby ensured Kennedy's victory.

So there are odd resonances surrounding Phenix City, both with the assassination of the elder Patterson and -- by way of the Marcello/Trafficante and Bay of Pigs connections -- with that of Kennedy himself.

Also, if I did my math right, it was 3 years and three days since the Aurora shooting.

James Holmes certainly seems to have suffered from mental anguish and John Houser was described in the first news story I read as a drifter with a criminal past, although nothing recent but among his person effects were wigs and glasses, things he could use to disguise himself.

According to the latest report, he was heading to his car, a 1995 Lincoln Continental, when the sound of police sirens caused him to re-enter the movie theater to take his own life.

Of course, a theater is also known as a house or 'the house' with such phrase as "bring the house down" and "is there a doctor in the house" or even just 'play house.' I've heard "theater" relates somehow to 'god' or 'goddess.' I know 'thea' means 'goddess' but I do not know if theater derives from that. I suppose it could since early plays would have a god come down in a machine to determine the outcome of the play and passion plays were religious in nature.