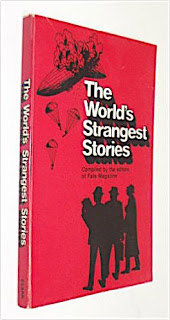 The following is my chronological analysis of past "Phantom Clowns" flaps, from 1981 until the beginning of the current 2016 "epidemic," as Wikipedia entitles it..  The phrase "Phantom Clowns" was coined by me (Loren Coleman) based on my research on the first major wave in 1981. It was initially used in my 1982 article of with that title, in the Chicago-based national publication, Fate Magazine, before appearing in subsequent books, including the 1983 compilation pictured above. 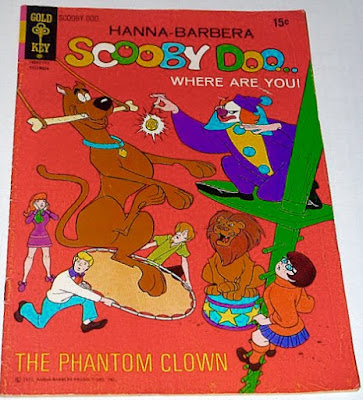 The comic book, Scooby Doo Where Are You!, Gold Key #9, from Hanna-Barbera, "Phantom Clown," appeared in 1971, as I would discover decades after I independently coined the phrase for the 1981 mystery abduction phenomenon.

All the following are reports of non-photographed, uncaught clowns sighted by children and reported to be attempting to abduct or "bother" children. 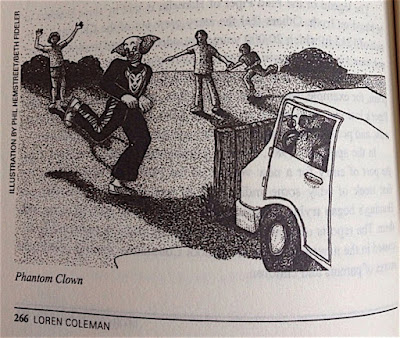 Kansas
Kansas City - a clown in a black shirt with a devil on it, black pants with candy canes down the side of each leg, with a sword - yellow van

Story stayed out of the national news until this Associated Press story of June 11, 1981.

Wisconsin
Fitchburg - clown in blackface - on foot, luring into woods

Posted by Loren Coleman at 9:42 AM

The clowns are hitting very close to home for me.

My sons' school district has been dealing with the rumors and sent out this message on their website:

My oldest mentioned there had been police at David Douglas High School where he attends on Monday, and I saw a police car there today when I dropped him off. Apparently, there was supposed to be a threat tomorrow.

But I got this email today, from my younger son's school, Floyd Light Middle School:
Dear Floyd Light families:

I wanted to alert you to an incident that happened this morning outside our school. The safety and security of your students while they are in our care is our highest priority, as well as communicating with you about any incidents.

At about 8:25 a.m., after school had started, a man approached the school wearing a clown mask and boxing gloves. He did not enter the school, but was seen outside shadow boxing. The man was immediately confronted by a Floyd Light staff member, who also called 911. The man fled into a nearby residential area.

Portland police arrived and were directed to a residence where they believed the man fled to. At about 8:40 a.m., police apprehended and arrested the man and took him into custody.

At no time did the man gain access to the school, and he posed no threat to any students, who remained safely inside the building.

As you are probably aware, there seems to be a fad or craze nationwide and in Portland around people dressed as clowns and frightening other people. This incident seems to be a case of that fad. While the man in this morning's incident was not connected to our school, our school district is aware that some students have talked about joining this fad by dressing as clowns as a prank.

Please have a conversation with your student about the potential dangers associated with doing this. Police are on heightened alert, and these clown rumors have many people on edge, creating a potential hazard.

Please don't hesitate to contact us with any questions or concerns.

I had been worrying ever since you posted about the name Logan, since that's my youngest son's name. Before that, my name (Gordon) showed up in one of the Clown posts, where you had listed the streets in one of the communities where police were following reports of a clown. And in the Chelsea bombing, I saw numbers of importance to me: one bomb was near '7th Avenue' ... and the second was found 'on 27th St'. My birthday is 7/27, and that's an anagram of my address (and apartment number), 272. And the day you posted Logan, I was reading one of Linda Godfrey's books, American Monsters, and one of the (I think) lake monsters had a witness named Genevieve---which is the name of their mom (my ex).

Feel free to use any of this information for any posts, or in the case of the Clowns and my kids' schools, for any book you might write. I believe that you really should, in light of all that's happened this year.

Also today, there is a news report of a murder-suicide of a father and his children in a Portland suburb; Greenway appears twice in the article, as does Enfield (and I thought of the monster you investigated):

Police on Thursday morning identified a father and his two children who were found dead in an apparent murder-suicide at a Beaverton apartment complex.

Police have confirmed that two children and one man were found dead at the scene of a shooting at an apartment complex in Beaverton.

Officers with the Beaverton Police Department responded to the Redwood Creek Apartments near Southwest Hall Boulevard and Southwest Greenway Avenue just before 4:30 p.m. Wednesday after a woman called 911.

Police said the woman discovered three bodies in an apartment at the complex.

It appeared all three were dead, but when officers stepped out of the unit they heard a gunshot, which they believe was Lakalo Kawika Enfield taking his own life.

Police say Lakalo Kawika Enfield is the father of the two children.

The school brought in a team of counselors on campus Thursday to help students and staff deal with the loss of the children.

"It’s sober in terms of the staff," district spokesperson Maureen Wheeler said. “Our hearts and thoughts are with the family and the loss of these dear children.”

Detectives with the Beaverton Police Department and Washington County Major Crimes unit are investigating the deaths as a murder-suicide.

Police confirmed they responded to the location on Sept. 29 on reports of a verbal domestic disturbance. Officers said there were no signs of an assault and Lakalo Kawika Enfield agreed to go to a relative's home.

Officers were not called to that location again until Wednesday.

And I saw this sad news as well:

Their 7-year-old daughter went to school Tuesday and told officials that something was wrong.

Jessica Lally and her boyfriend Chris were addicted to heroin, according to Jessica’s sister Courtney Lally.

They were also the parents to four young kids.

The oldest of which was the one who notified authorities.

Reminded me of Captain Scott Lally of the Westbrook Police and the Wessie snakeskin story. I also used to know a Bryan Lally through my union connections, but his family were the only Lallys I had ever heard of until Wessie, and this article.

I just came across this article about Phantom Clowns which was written 9 months ago, long before the present flap. It's quite detailed about the events of 1981 and mentions you halfway through. It's on the website of Jason Blum, a very successful Hollywood producer of micro budget horror films as well as mainstream movies like Whiplash.

When Pennywise Was Real: The Phantom Clown Scare of 1981

Loren Coleman, a university professor who had a long standing interest in cryptozoology, was the first to start putting all these sightings together, which he collected in his book, Mysterious America. In the time before the internet, stories like this lived and died on local news channels, and most everyone wouldn’t notice the clown conspiracy happening across the country. Coleman, who looked for the strange in everything, caught it and found that it may have started even earlier in the year back in March.

Updated on the arrest at my son's school of 55 year old grandfather David Dahlman.

That page has a few more recent clown links from around the state of Oregon.

He's got a history of arrests as I saw when I looked him up at pdxmugshots, but also saw a James Wayne Dahlman with an even bigger history. Yeah, Wayne.

I also saw a listing for a book at Amazon, called The Dahlman Files: A Tony Dahlman Paranormal Mystery (The Dahlman Prophecy Book 1), by Sudie Crouch. Apparently it is set in Wisconsin, a known paranormal hotspot state.

New word coined by the Daily Mail in the UK

Clownmageddon continues! Now a woman is forced into premature labour after being terrified by masked figure while children run in terror from a knife-wielding clown

Have you been terrorised by a clown or spotted one in your area? Email jessica.duncan@mailonline.co.uk

In the last weeks we have a lot of "Horror-Clown-Encounters" in the Netherlands, Sweden and particulary in Germany. The "Clowns" are springing out of the bushes and scare innocent people like bicycle riders and so on. Some of these "clowns" have knifes, axes, baseball bats or sometimes chainsaws. The "face" of the clowns is looking terrible. See here a couple of examples:

The is a really horror-clown hype out here!