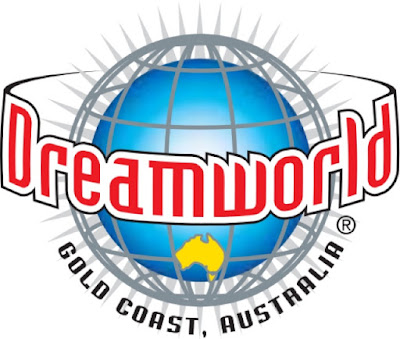 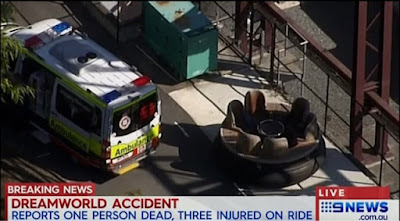 Four people have died after a raft flipped off a river rapids ride at Dreamworld theme park in Australia.
The Thunder River Rapids ride (built in 1986) suffered a "malfunction," which caused two people to be thrown from the six-person raft and two people to be trapped in its conveyor belt on Tuesday, October 25, 2016, at 2:17 pm, local time.
Two men and two women between the ages of 32 and 40 died on the family ride, which is open to children as young as two, on the Gold Coast in Queensland.
Those killed include Canberra woman Kate Goodchild (née Dorsett), 32, her brother Luke Dorsett, partner Roozi Araghi and a 42-year-old woman. 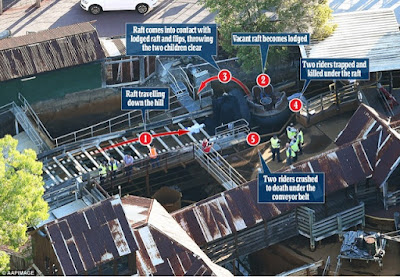 Witnesses said the accident was horrific and happened as the ride was coming to an end.
"My sister and niece were in the ride, they were so traumatised, there is a woman hanging by her foot, crushed from the ride," one witness told the Gold Coast Bulletin.
Local media reports the victims were possibly from the same family and may have been visiting from Canberra.


Other incidents have occurred at Dreamworld, including:

June 2009: Helicopter crashes into Dreamworld carpark, injuring the pilot and four Taiwanese passengers
2011: Two separate reports of Bengal tiger Kato biting handlers at the Tiger Island attraction - once in May and once in September
November 2013: More than 7000 people evacuated from Dreamworld in under an hour after a bushfire came close to the facility
April 2016: A passenger on the Rocky Hollow Log Ride nearly drowned after being thrown from the attraction and suffering lacerations to his head

A recent new HBO tv series, based on an earlier Michael Crichton movie about a futuristic theme park, is Westworld. The series deals with "malfunctions" occurring within the previously smoothly running park. 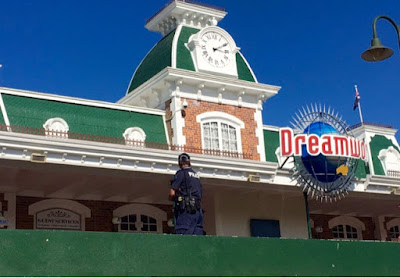 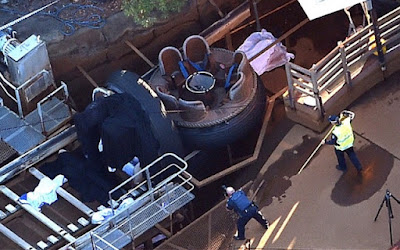 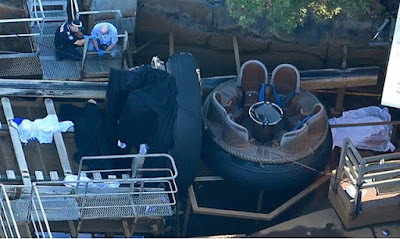 Stock image of the ride: 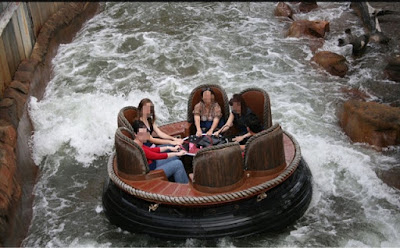 Dreamworld is a theme park situated on the Gold Coast in Queensland. It is Australia's largest theme park with over 40 rides and attractions, including five roller coasters. 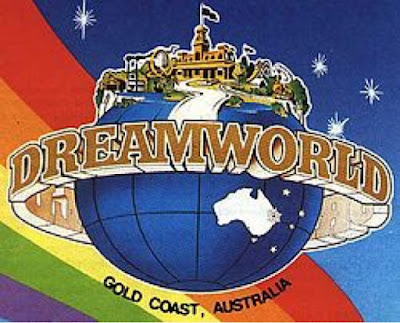 
The original theme park was built from 1974-1976 with the employment of several designers who designed Disneyland and Walt Disney World.
The park is made up of several themed lands: Ocean Parade, DreamWorks Experience, Wiggles World, Gold Rush Country, Rocky Hollow, Tiger Island and the Dreamworld Corroboree. These lands have a collection of rides, animal exhibits, shows, food outlets and merchandise shops.
Dreamworld is noted for being the location of the Australian Big Brother house since the program began in Australia in 2001.
On several occasions during the year, Dreamworld remains open after dark. This event, known as Screamworld, includes all of the thrill rides and a selection of children's rides.
===
Westworld is a 1973 science fiction Western thriller film written and directed by novelist Michael Crichton about amusement park androids that malfunction and begin killing visitors. It stars Yul Brynner as an android in a futuristic Western-themed amusement park, and Richard Benjamin and James Brolin as guests of the park.

Westworld was the first theatrical feature directed by Michael Crichton. It was also the first feature film to use digital image processing, to pixellate photography to simulate an android point of view. The film was nominated for Hugo, Nebula and Saturn awards.

Westworld was followed by a sequel film, Futureworld (1976), and a short-lived television series, Beyond Westworld (1980). A new television series from HBO, based on the original film, debuted on October 2, 2016. Source: Wikipedia. 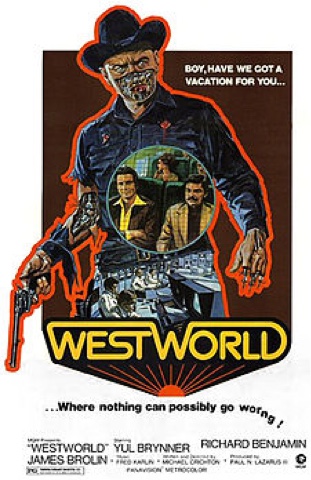 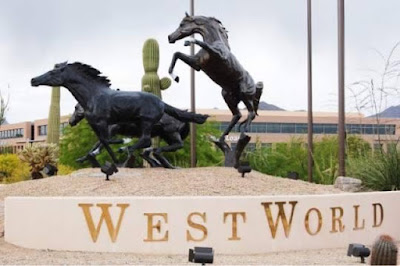 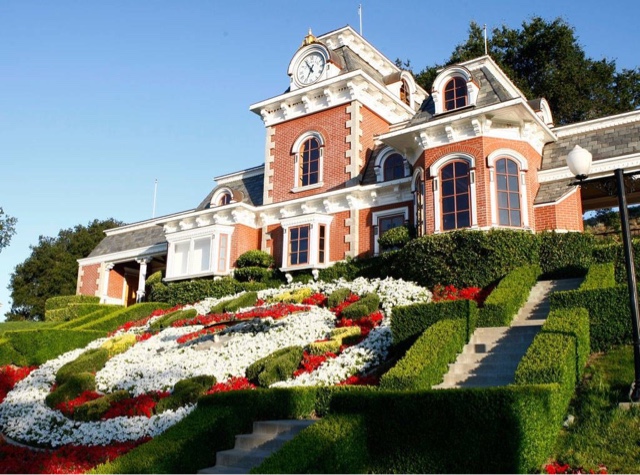 Disneyland, It's A Small World 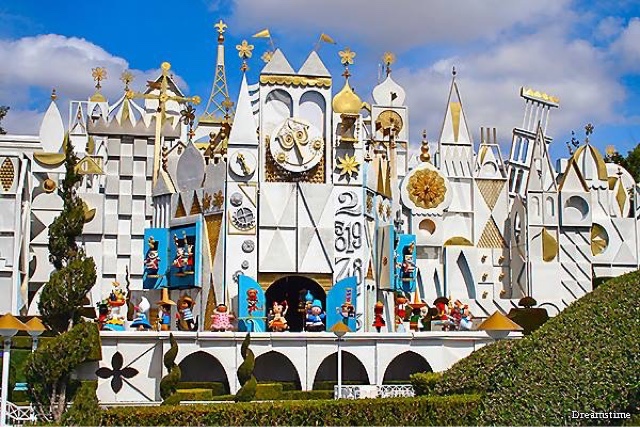 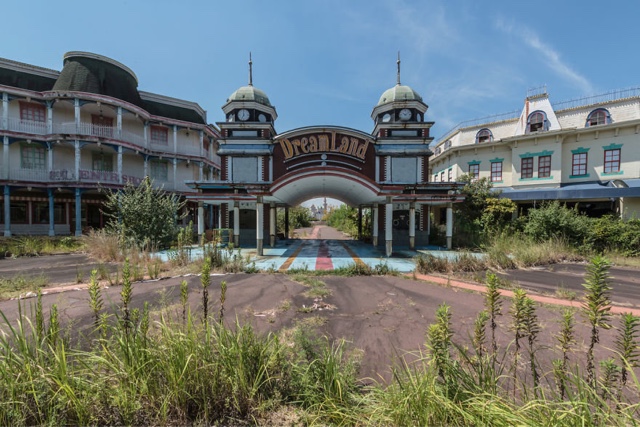 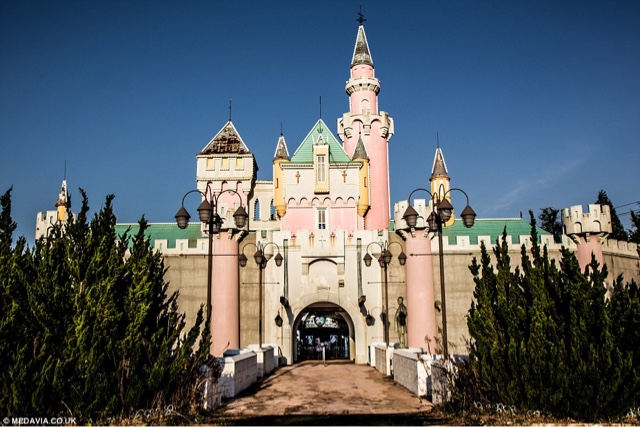 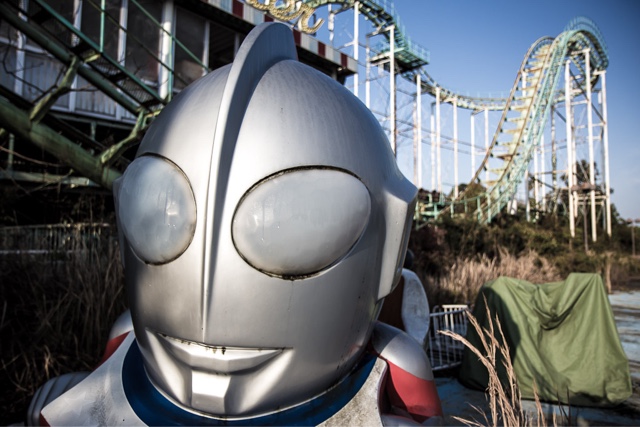 Posted by Loren Coleman at 5:13 AM