On October 23, 2016, a 1996 MCI bus, operated by USA Holiday, was returning to Los Angeles from the Red Earth Casino near Salton Sea, California, when it slammed into the rear of a tractor-trailer, near Palm Springs, killing 13 people and injuring 31 others.

The bus driver was among those killed and the truck driver was injured.

"The speed of the bus was so significant that when it hit the back of the big rig... the trailer itself entered about 15 feet into the bus," California Highway Patrol division Chief Jim Abele said.

Teodulo Elias Vides, 59, of Los Angeles, was driving the 1996 MCI motor coach. Vides was also the owner of the company, Alhambra-based USA Holiday, that operated the bus, according to the Los Angeles Times. He had previously been sued at least twice for negligence, including over a crash that left three people dead, the newspaper reported.

The total number of people on the bus, including the driver, thus was 44.

The crash occurred at approximately 5:15 a.m. on the westbound side of Interstate 10, west of Indian Avenue. The report of the accident came in at 5:17 a.m. local time, officials said. The cause was not immediately known. 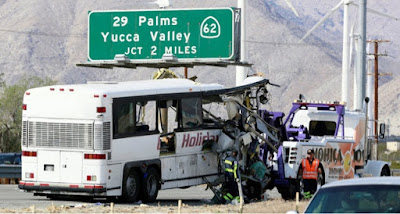 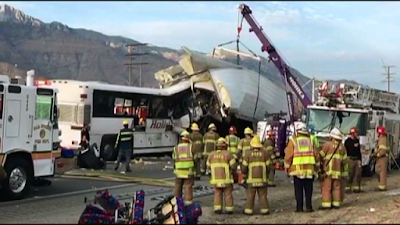 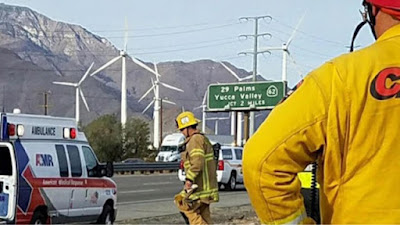 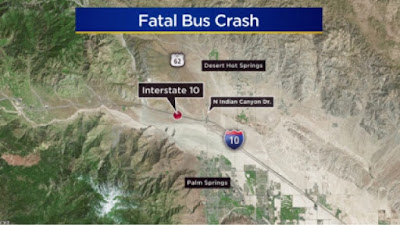 In the first photo with the mountains in the background, it is an eerie reminder of the Trinidad CO crash last June 27.
What first struck me was the number combo: 13 killed, 31 injured, because they match exactly the initial reports from the Charles Whitman UT-Tower rampage in Austin in 1966. (Now stands at 14-33.)
See, NY Daily News story of Aug. 2, 1966:

The tour bus rear-ended a big rig trailer that had slowed down to 5 mph. All the deaths and injuries were on the bus, mainly at the front. It was a tour bus returning to LA from a casino outing. It happened on IH 10. Something about unlucky 13 and 10 are numbers with gambling significance. Time of crash was 5:15 AM. (Said to be reported at 5:17.)
The bus was returning from the Red Earth Casino near the Salton Sea ~ 50 miles SSE from the accident site.
Coordinates of accident site: 33.905343, -116.558680
Red Earth Casino: 33.352368, -116.019579
(Note that both latitudes fall within the 33 degree band.)
The Salton Sea is like America's Dead Sea and is also where the San Andreas fault line ends on the Eastern shore. A month ago, there were many small earthquakes 2-4 magnitude in the Salton Sea, just 15 mile East of the casino which sits near the Western shore. Right across from the casino is Bombay Beach on the Eastern shore which was the epicenter of many of these little rumbling quakes.
See the entire SA fault on the map here, from SF to Salton Sea, where the Southern tip is just 3 miles NNW from Bombay Beach.
Southern tip of SA Fault: 33.399966, -115.776669

Good catch. Caught my eye, too. Red Earth. Salt. Desert area. Palms: psalm. Lebanon so close to Syria, and all.

I'm correcting my post; Lebanon's driest areas are only semi-desert.

But I'm still sticking with my sync.

Interestingly: "Between 2002 and 2012, Highway 62 suffered 3.3 fatal crashes for every 100 million miles driven on the roadway. Over the same time period, the national average was 1.3 on all roads, and 2.1 on rural roads only. The average for all California roads was 1.1."

A one-time transportation advisor to Hillary Clinton when she was in the US Senate is quoted in the article.