Phantom Clowns: All News Is Local 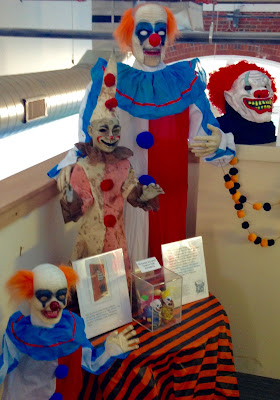 The International Cryptozoology Museum has a current exhibit on the differences between Phantom Clowns (coined by me in 1981) & Stalking Clowns.

"All news is local."

The Creepy Clown Epidemic is global. But all stories begin locally, and even national stories are written to reflect the local angle, as the old adage conveys.

Coverage can be national and local. What happens when even your hometown newspaper - in this case from the same publisher whose papers I delivered as a paperboy to over a hundred homes in the 1960s - catches up with the phenomenon?

DECATUR – Coulrophobia – a morbid fear of clowns – is spreading across the nation like a flu outbreak, and its symptoms are infecting people in Central Illinois.
Decatur police have received several calls from Facebook users worried about threatening messages that pop up, accompanied by pictures of clowns. These have turned out to be hoaxes but they are part of a coast-to-coast pattern of scary clown sightings and reports of clowns frightening people, most proving false but some real, that are intensifying as Halloween approaches.
“Social media causes stuff like this to just blow up and get way out of proportion,” said police Sgt. Chris Copeland. “I even heard that somewhere down in the south part of the country, and this might be another rumor floating around Facebook, someone actually got shot while wearing a clown suit.”
Copeland said people have a legal right to dress as whomever, or whatever, they want for Halloween. But he urges caution on where you wear a clown suit and how you behave, and says this might be a very good year to make another costume choice.
And he also has a word of warning for coulrophobia sufferers: don't overreact. Copeland has seen aggressive messages on Facebook targeting clowns and threatening to wipe the smile off their faces with violence.
“I would also like to caution anyone thinking that, just because someone is wearing a clown suit, that gives reasonable cause to shoot them or kill them,” added Copeland. “That is not the case.”
Nationwide news reports on the scary clown phenomena have quoted instances of schools being locked down on reports of clowns wandering the campus. Rolling Stone magazine featured an interview with author Loren Coleman, a Decatur native, who wrote about something he called “Phantom Clown Theory” in his 1981 [sic ~ the coining was in 1981, the book was published in 1983] Mysterious America.
Coleman is quoted as saying stories about clowns trying to lure children have persisted for years and can warp into a mass hysteria.
Professional clowns, meanwhile, are feeling the pain: both in their wallets as bookings get canceled and in fear for their own safety. One group met in Tucson, Ariz., recently to stage a costumed protest march called “Clown Lives Matter.” A flier for the event said: “The march is a peaceful way to show clowns are not psycho killers ... Come out, bring the family, meet a clown and get a hug!”
Decatur Police Chief Jim Getz, watching the clown scare roll across the internet, said he's not seen anything like this before. “As good as the social media can be for some things, it can be just as detrimental in other ways,” he said.
Source:
Clowning around isn't so funny now by Tony Reid, Herald & Review, Decatur, Illinois, October 11, 2016.

Rolling Stone has mentioned me, at least twice, in their recent clown articles:

"'Killer Clowns': Inside the Terrifying Hoax Sweeping America: Clowns have been spotted lurking in woods from South Carolina to upstate New York," By Suzanne Zuppello, September 29, 2016.

The Phantom Clowns, as they were dubbed by cryptozoologist Loren Coleman given their allusive nature, spread to Kansas City, Denver, Omaha, and Pennsylvania. Since the 1980s, clowns have made appearances across the country, usually in the weeks and months leading up to Halloween.

Coleman's phantom clown theory is rooted in the "primal dread that so many children experience in their presence."


"'Killer Clowns' Now Targets of Violence: Clown sightings began as an amusing phenomenon, but have become increasingly dangerous – mostly to the clowns themselves," By Suzanne Zuppello, October 10, 2016.

In his 1981 [sic ~ 1983] book Mysterious America, cryptozoologist Loren Coleman coined the phrase "Phantom Clown Theory," which refers to the way a few sightings of clowns 'luring' children into vans, cars and forests can turn into mass hysteria – even though no clowns are ever actually caught. He says that, though this phenomenon has existed for over 30 years, the recent spate has become worse because of social media.

"The initial sightings were classic Phantom Clowns," Colman tells Rolling Stone, referring to the early reports in South Carolina. "Then, this was then diluted by 'Stalking Clowns': real people dressing up to scare, be seen and be photographed." There is a real danger here – just not where one might expect. "Place this 'Clown Sightings' flap in the middle of an extremely violent year, with so many guns available, and you are going to have potentially dangerous events occurring," he says. "Not for the 'Phantom Clowns' but for the human 'Stalking Clowns' who will be the targets of angry, scared citizens."

Coleman's prediction is becoming reality. Last week, students at both Pennsylvania State University and Nashville's Belmont University announced campus-wide search parties for clowns after sightings were reported on both campuses. But an amusing evening turned potentially grim as students armed themselves with bats during the march. One student leader "underestimated the power of hysteria" that their marches against clowns would stir up. While those searches luckily stayed peaceful, videos from elsewhere, under the tag #ClownLivesMatter, show people encountering clowns, who appear non-threatening aside from their creepy ensemble, and beating them up. One video even shows a clown being beaten senseless with a baseball bat.


Other recent interviews and mentions of my past research include:

"How a Maine-based Bigfoot expert found himself at the center of the national clown frenzy," by Dugan Arnett, Boston Globe, October 7, 2016.

The article is an extensive overview of a long interview with me, as well as containing a quote from a key member of the Museum's staff.

As assistant museum director Jeff Meuse puts it, “It’s been quite a frenzy with him trying to make sure that everyone gets a little piece of Loren Coleman.” 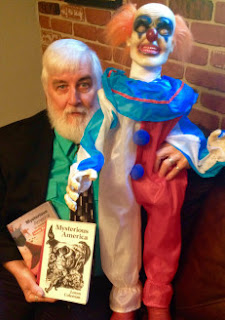 But while the clown craze is disturbing, it’s mostly harmless and nothing new, says cryptozoologist Loren Coleman, an “investigator of human and animal mysteries” and author of 35 books.
He traced the phenomenon to Massachusetts in 1981, when children reported evil clowns attempting to lure them into vans.
The clowns were never seen by adults.
“There were no arrests, no photographs, no evidence and no abductions,” Coleman told The Post.
Soon after, the “phantom clowns,” as Coleman calls them, turned up in Providence, RI, Kansas City, Mo., Omaha, Neb., Denver, and Pittsburgh.
At the time, Coleman was working as director of the Charlestown office of the Massachusetts Department of Social Services. He wrote to 400 “fellow researchers and writers,” wondering if they had heard of the “unexplained phenomenon.”
The feedback revealed there had been similar reports in local papers. “That was the mystery. How do people in different parts of the country have the same experience? There was no internet or wire stories or national stories about this phenomenon,” said Coleman, who wrote about the sightings in his book Mysterious America.
To this day, the 1981 “phantom clowns” remain a “total mystery.”
“There are long stretches where nothing happens,” Coleman said, noting minor sightings from Phoenix in 1985, and South Orange and Belleville, NJ, in 1991.

There have been other examples. If I thought the 1981 wave of Phantom Clown sightings were widespread, nothing could have prepared me for 2016's spread of both Phantom Clowns and Stalking Clowns events. 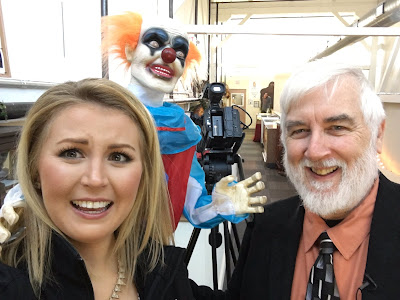 20 of the strangest, and most popular, crime stories from the archives

Here are 20 of the "weirdest" crime stories from the Herald & Review. The list is generated from audience response (pageviews) on herald-r…

A friend of mine reported a clown sighting on Facebook yesterday, but didn't contact authorities or the media. I asked her for her permission to share her story with you, since you research them.

Maureen Martin of Millersville, Maryland (suburban Baltimore) had a clown sighting on Tuesday, October 11, 2016, between 4 and 6 pm.

She was driving and saw a clown stopped at a red light at the intersection of Elvaton Road with Oakwood Road. The clown was in the driver's seat of a 'white box truck'. Quote: This guy creeped me out and my first thought was-he probably has bodies in the back! Scary!!!

This intersection is kind of diagonally across the street from Southgate/Old Mill Park. It's a standard park with fields and trees.

I did notice how her name and the location had the extensive M alliteration. I also noticed how two of the reports you've mentioned in the last few weeks had streets with Oak in their names. And I most especially noticed the white box truck connection, hearkening back to the earliest sightings. And nearby is a street called Nathan Way....and my nephew's name is Nathan.

Not sure if you've cited it already, but I have an early-80s Omni issue with you and the phantom clowns--I think it's in the Continuum section.

Nikki Sinn posted the announcement to one of her Facebook pages.

With the numorous death threats and harassment its sad to say we have canceled what was supposed to be a fun peaceful walk.

We apologize to everyone who was excited to go and have a good night of fun.

The group of people that have bombarded the event page with harassing posts and personal information will be reported to the authorities.

Now it's affecting the economy!

And now, anti-clown legislation. But is it constitutional? And will a Burqua ban be next?

County Board of Supervisors Enacts Anti-Clown Ordinance Through Halloween

The Kemper County, Mississippi Board of Supervisors unanimously approved an anti-clown ordinance during its regular meeting this past Monday night. According to the Kemper County Messenger newspaper, the new ordinance was signed into law at 11:28 a.m. on Monday by County Board President Johnny Whitsett.

Starting this past Monday through at least November 1st in Kemper County, it shall be “unlawful for any person of any age to appear in public in Kemper County in a clown costume, clown mask or clown makeup.”

Board attorney Bo Bailey told advised that the ordinance must have “teeth” in order for it to be effective, so the Board gave the Kemper County Sheriff’s Office power to enforce the measure and violators face a fine of up to $150.

Board president Whitsett told the newspaper people in the county really believe the nationwide clown problem “has really gotten out of hand.” Whitsett, and other Board members also reportedly expressed concern during the meeting about what members of the public may do if they woke up to a clown in their own yard.

“It wouldn’t be good,” Whitsett said.

Tom, interesting questions. There may be precedent for clown masks/make-up. In the US, KKK masks have been banned and other nations have past laws banning masks at political events.