In French and Spanish, the meaning of the name Reina is "Queen." Is this predictive of another Queen to be involved in the news? 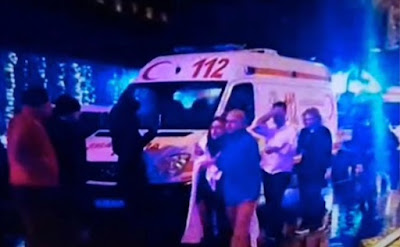 An ambulance arrives at the Reina club to take away the injured.


At least 39 people have been killed in a gun attack at a famous nightclub in Istanbul during New Year's Eve celebrations, 31 December 2016.

Two attackers were reportedly dressed in Santa costumes, witnesses told CNN Turk, when they opened fire in the Reina club in the Ortakoy area of the city. (Disputed reports are flying that it was only one Santa or there were no Santas. Stay tuned.)

One civilian and one police officer were killed and several wounded, NTV reported.

There were reportedly several hundred people in the club, which is among the city's glitziest nightspots.

Police cordoned off the area about 2 miles away from the nightclub as multiple ambulances rushed to the scene.


Security measures had been heightened in major Turkish cities, with police barring traffic leading up to key squares in Istanbul and the capital Ankara. In Istanbul, 17,000 police officers were put on duty, some camouflaged as Santa Claus and others as street vendors, Anadolu reported. 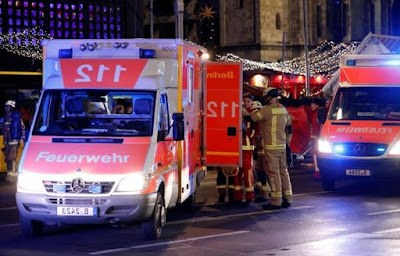 Rescue workers stand near the Christmas market in Berlin, Germany, December 19, 2016, after a truck crashes into a crowd.

Posted by Loren Coleman at 7:40 PM

Humanity is beginning this new year terror with a violent jolt. I get the feeling that 2017 may be a year of dramatic turnover of heads of state.

Happy New Year to you and yours, Loren. Thanks for all you do on Twilight Language.