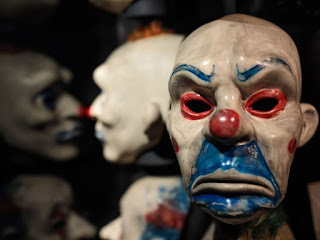 Police said the shooting was reported about 1 p.m. outside Cut City Barber Shop on the corner of Bullard Street and Industrial Drive.
Officers found 41-year-old Marcus Hamblin sitting inside a vehicle suffering from multiple gunshot wounds. He was pronounced dead at the scene.
***
According to a witness, four armed men in a dark sedan approached the victim and shots were fired. The suspects then fled the scene. Clarion Ledger.


The newspaper decided to use the Heath Ledger clown mask from The Dark Knight film.

Marcus is a masculine given name of Ancient Roman pre-Christian origin derived either from Etruscan Marce of unknown meaning(possibly from the Etruscan "mar" which means "to harvest"), or referring to the god Mars.

Hamblin is a name of ancient Norman origin. It arrived in England with the Norman Conquest of 1066. The Hamblin family lived in Gloucestershire. Their name, however, is local reference of Old French derivation. This surname, of English origin, is derived from the Anglo-Norman French given name "Ham(b)lin", a double diminutive of "Hammone", itself coming from the Norman personal name "Hamo(n)", which derives from the Germanic "Haimo", a short form of the various compound name with the first element "haim" meaning "home."
Posted by Loren Coleman at 6:25 PM