Fortean Way of the Ray Passes Away 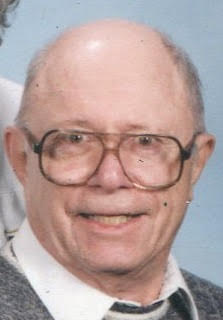 In the age before emails and the Internet, Forteans would carry on long distance exchanges of letters and news articles via (what today is termed snail) mail.

One individual known by name more than in person was Ray Nelke. He quietly died at 91, in February.

His official obituary, published in the St. Louis Post-Dispatch, mentioned he "worked for the St. Louis Post Dispatch as a typesetter and then went on to be the president of the Typographical Union#8 until his retirement at the age of 62. He was an avid collector of unusual subject matter pertaining to UFO’s and the paranormal {Forteana}. Ray was a member of All Saints Catholic Church in St. Peters."

"Collectors of Unusual Data, International" (COUD-I) of St Louis, Missouri, was founded by Ray Nelke. He would characterize "his home as a clearing house for all sorts of weird news" and would give out "huge packets on a trade basis only."

Ray's presence wasn't much on the web, but, at least, on Facebook he liked Coast to Coast AM, International Cryptozoology Museum, and The Black Vault, which was quite an array.

He did appear on early net-forums as "Way of the Ray."

Another classic Fortean is gone, pulling off a long endplay.

The Way of the Ray had his day, and he's now gone away. He was always helpful and enlightening in his heyday. Ray had much to say, via his oft-shared repeated communique.

Thank you for all you sent our way. My way. In your way.

Oh! I remember this fellow and COUD in my very early days as a preteen Fortean! Thank you, Loren. My question is, as always: who ends up with his stash? Is it in good hands?