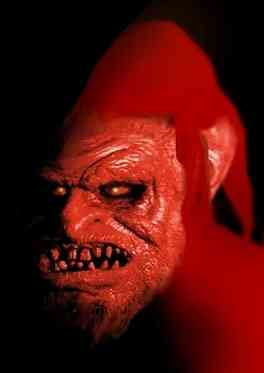 Is any of this even true? The following is taken and summarized from Wikipedia.

The Nain Rouge, French for "red dwarf" or "red gnome" is a mythical creature that originated in Normandy, France, as a type of lutin (the French name, male, for a type of hobgoblin (an amusing goblin), in French folklore and fairy tales; females are called lutines).

The hobgoblin of Normandy is similar to house-spirits of England, Germany and Scandinavia. It sometimes takes the form of a horse, and in this shape is called Le Cheval Bayard.

In a French fairy tale, "Le Prince Lutin," written in 1697 has a description of the air, water and terrestrial lutin: "You are invisible when you like it; you cross in one moment the vast space of the universe; you rise without having wings; you go through the ground without dying; you penetrate the abysses of the sea without drowning; you enter everywhere, though the windows and the doors are closed; and, when you decide to, you can let yourself be seen in your natural form."

In this story a red hat with two feathers makes the Lutin invisible. 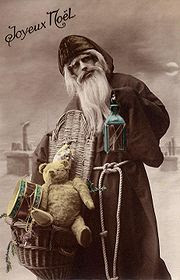 In the United States, Nain Rouge haunts Detroit, Michigan, and is feared by its residents as "the harbinger of doom." (Skinner 1896) Its appearance is said to presage terrible events for the city [like a banshee]. The Nain Rouge appears as a small child-like creature with red or black fur boots. It is also said to have "blazing red eyes and rotten teeth." (Skinner 1896)

The creature is said to have been attacked in 1701 by the first white settler of Detroit, Antoine de la Mothe Cadillac, who soon after lost his fortune. The creature is also said to have appeared on July 30, 1763 before the Battle of Bloody Run, where 58 British soldiers were killed by Native Americans from Chief Pontiac's tribe.The small tributary of the Detroit river, which still flows through what is now Elmwood Cemetery, turned red with blood for days after the battle. It is said he was seen dancing on the banks of the Detroit river.

Famous multiple sighting occurred in the days before the 1805 fire which destroyed most of Detroit. General William Hull reported a "dwarf attack" in the fog just before his surrender of Detroit in the War of 1812.

A woman claimed to have been attacked in 1884, and described the creature as resembling, "a baboon with a horned head...brilliant restless eyes and a devilish leer on its face." Another attack was reported in 1964.

Other sightings include the day before the 12th Street Riot in 1967 and before a huge snow/ice storm of March 1976, when two utility workers are said to have seen what they thought was a child climbing a utility pole which then jumped from the top of the pole and ran away as they approached.

More recently, in the autumn of 1996, according to an article in the Michigan Believer, the Nain Rouge was spotted by two admittedly drunken nightclub patrons, who claimed to both have heard a strange "cawing sound, similar to a crow," coming from a "small hunched-over man" who was fleeing the scene of a car burglary. The creature was described as wearing "what looked like a really nasty torn fur coat."

Detroit Beer Co., a brewpub in downtown Detroit, has as its signature brew a "Detroit Dwarf" lager, named in honor of the Nain Rouge. 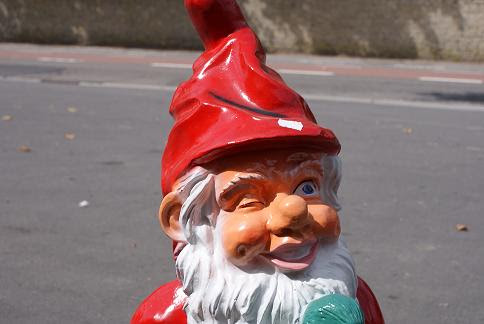 Have you heard any of these stories of the "Nain Rouge"? The crimson threads between the Nain Rouge and the imagery in the film Don't Look Now (1973) and the allied cinema reflective references are certainly there. But the hairs on the back of my neck stand up. Are such stories merely gamer fantasies or created fictions based on a few threads of folklore? 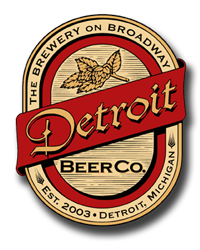 Well, at least the brewery is real and so is the brew, allegedly based on the tale of the Nain Rouge:

The Detroit Dwarf
Copper/amber in color, cloudy, strong in alcohol (6.8% ABV). Clean lager character with some fruity ale notes. Earthy with flavors of tea and forest nuts. Distinct balance between malt and hops allows the creamy texture to really come through. We earned a medal at the Great American Beer festival in our first year of business with this one and it remains our house specialty to this day.

Red's Rye (bottle pictured below) appears to be a Michigan ale that also is related to the Nain Rouge folklore tied to Detroit. 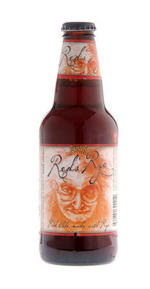 If you are from Michigan, have you ever heard of any of these stories, in addition to the beer and ale?

Thanks to Dr. Benway for mentioning the name. Thanks to Ben Fairhall for the scarlet imagery metaphor.
Posted by Loren Coleman at 1:36 PM

That would be a Scarlet Thread, I assume?

Does the excerpt from the story describe the imagined experience of the Nain Rouge, or some other fairy prince? (He sounds like one powerful little f*cker, whoever he is.)

I notice in that story it's a red hat which makes the lutin disappear. Am I right to assume this is not a nain rouge, in this instance?

Would any of those attributes- the ability to disappear, to change form, etc- also be common to the nain rouge proper?

Papa Smurf on crack, I would say.
Ugly specimen. I don't blame Detroit for keeping mum about this.

The Nain Rouge is a very popular story in Detroit. I have many friends from there, and all have heard of it.

A BIG local legend there.

I would have to imagine it's popped into this dimension over the past few years as Detroit has basically disintegrated with the fall of the car companies.

From your article it sounds like this might be similar in vein to the elder things envisioned to haunt the American landscape by Lovecraft - a dark archetype that was kicked up in Detroit when the settlers first made their up what is now the Detroit river.

I'm a fan of the SciFi show Ghost Hunters, and in much of their most provocative footage the entities seem shorter than you would expect - seriously, almost dwarven. I wonder if there's a connection of some kind?

The Detroit Dwarf lager was named after the legend of "Le nain rouge". I found it in a book called "Haunted Michigan" about 7 years ago. Only a few Detroiters were aware of the story at that time. Since then it seems to have taken on a renewed vigor (the story, I mean). I never saw the dwarf, or met anyone that has claimed to, but a place like Detroit needs its own resident ghoul, N'est pas?

P.S.: I don't think Red's Rye has anything to do with the Red Dwarf, FYI.