Banana With A Gun 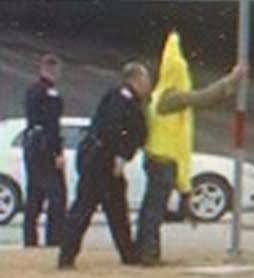 It turns out the 18-year-old dressed in the suit was a promotion for Derek Poe’s Golden Triangle tactical gun store in that town.

Poe said this idea was to attract customers to the store. 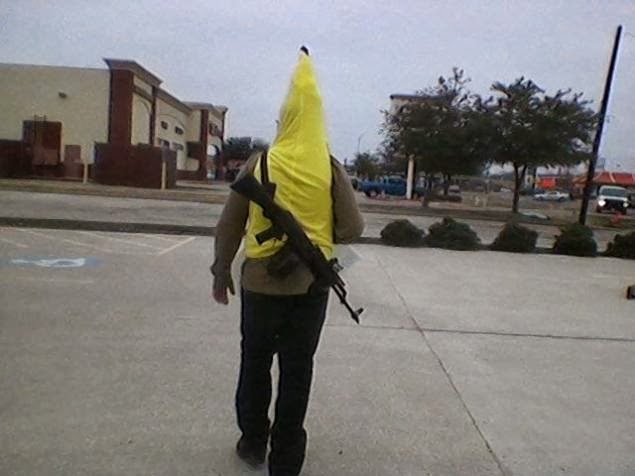 Law enforcement officers detained the banana/adolescent and released the following statement on their website;

“The rifle had a drum magazine attached with at least a 50-round capacity. Officers were able to determine that the young man was attempting to soliciting business for a local tactical and security store.”

They continued “officers cited the eighteen-year-old Beaumont man for violation of a city ordinance that prohibits soliciting in and alongside roadways.”

A Beaumont police spokesperson said officers temporarily detained the 18-year-old and found he had the rifle with a drum magazine attached with at least a 50-round capacity.

WSBT reports the guy had the gun slung across his back with the barrel pointed down while he held a sign that pointed to the store. Poe said he was only trying let people know his shop had moved to a new location and get a little attention. 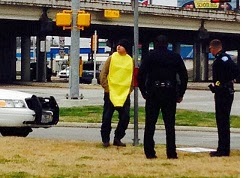 A Beaumont man was cited by police after riling up motorists by standing at an intersection carrying an AK-47 while dressed as a banana.

Beaumont is a French locational name from any of the five places in Normandy so called, deriving from the Old French "beu," fair, lovely, with "mont," a hill.

The Golden Triangle is an area of Southeast Texas between the cities of Beaumont, Port Arthur, and Orange. The "golden" refers to the wealth that came from the Spindletop oil strike in Beaumont in 1901. More recently from the many gas flares that are located at all of the local oil refineries, which creates a rough triangular shape around the area when viewed from nighttime aircraft. The term more generally refers now to the entire Beaumont-Port Arthur-Orange metropolitan area, forming the triangle.

The name "Golden Triangle" also reminds one of the "The Golden Triangle," which is one of Asia's two main opium-producing areas. It is an area of around 367,000 square miles that overlaps the mountains of three countries of Southeast Asia: Myanmar, Laos and Thailand. Along with Afghanistan in the Golden Crescent, it has been one of the most extensive opium-producing areas of Asia and of the world since the 1920s. Most of the world's heroin came from the Golden Triangle until the early 21st century when Afghanistan became the world's largest producer. 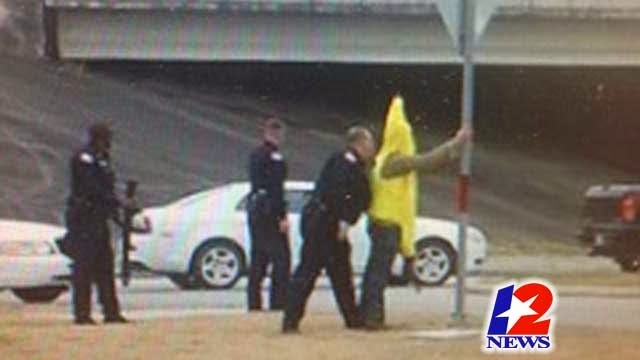