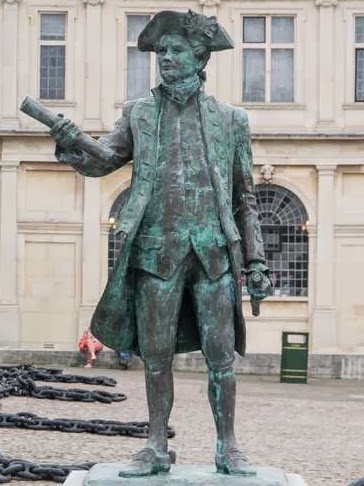 Vancouver, Washington State, is located across the river from Portland, Oregon. In two days, two workplace shootings have occurred.

The first shooting happened on Monday, February 3, 2014, when a paint company driver fatally shot a company manager and then killed himself at a Vancouver business park.

Police found the manager, Ryan E. Momeny, 45, lying dead in front of the Benjamin Moore Paint distribution center, authorities said. Robert R. Brown, 64, a company driver, was found inside a vehicle in the parking lot, dead from what appeared to be a self-inflicted gunshot wound, Vancouver police said.

Then on Tuesday afternoon, February 4th, a 46-year-old woman was taken into custody after the shooting of a 45-year-old man. She also was injured.

Tuesday's shooting happened just before 4 p.m. at the Center for Community Health on the Department of Veterans Affairs campus, Neiman said.

A spokesman for the VA Medical Center in Portland, Oregon, said the man is a VA employee of the regional Veterans Integrated Service Network, a network of medical centers, vet centers and outpatient clinics. Spokesman Daniel Herrigstad described the man's injuries as "non-life-threatening."

Vancouver shares its name with the larger city of Vancouver located 305 miles (491 km) north in the Canadian province of British Columbia. Both cities were named in honor of sea captain George Vancouver, although the Canadian city was incorporated 29 years after the incorporation of Vancouver, Washington. This occurred more than 60 years after the name Vancouver was first used in reference to the historic Fort Vancouver trading post on the Columbia River. City officials have periodically suggested changing the U.S. city's name to Fort Vancouver, Vancouver USA, or even Old Vancouver to reduce confusion with its northern neighbor. Many Pacific Northwest residents distinguish between the two cities by referring to the Canadian city as "Vancouver, B.C." and the United States one as "Vancouver, Washington," or "Vancouver USA." Local nicknames include: "Vantucky" (though the nickname is often used as a derogatory term)" and "The 'Couv(e)". In 2013, the nickname "Vansterdam" surfaced as a result of the legalization of marijuana in the state of Washington. This name is a clear reference to Amsterdam in the Netherlands. (Source) 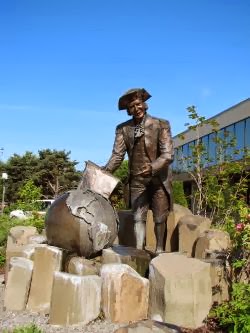 Statue directly above: George Vancouver, found at Vancouver, Washington, USA. Corner of 6th and Esther Steets, across from Esther Short Park.
Posted by Loren Coleman at 11:43 AM