Why do a limited number of names seem to be linked to a majority of workplace violent events, school shootings, and suicide cases?

What is the common thread running through these lexilinks? 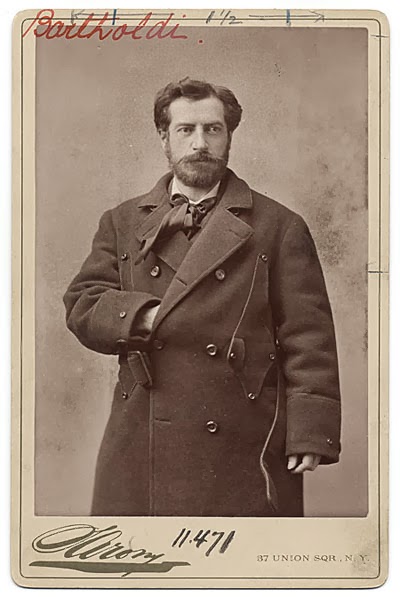 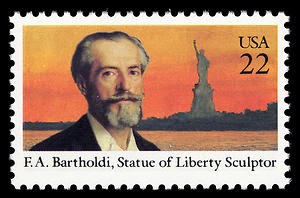 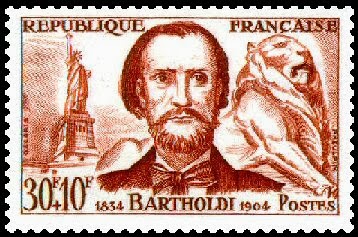 Bartholdi was a Freemason and the designer and sculptor of the Statue of Liberty in New York City's harbor. The Statue of Liberty is a representation of the Goddess Columbia. It is reportedly coded with secret society meanings and occult symbolism. Bartholdi was one of the early members of Lodge Alsace-Lorraine, Paris (Oct. 14, 1875), which was composed of prominent intellectuals, writers and government representatives.

The Bartholdi image and others in this essay, with the concealed hand in the coat, demonstrate the "Sign of the Master of the Second Veil," (7th Degree Mason) from Duncan's Masonic Ritual and Monitor, 1866. 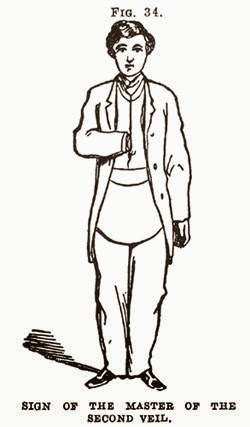 Here are a few other examples of individuals - with the same pose - who have lexilinks to the name game (e.g. Columbia, Columbus, Lincoln, Tecumseh, and yes, Fayette). Infrequently, some of these events are bundled into what has been called the "Curse of Tippecanoe," or what Gary Cohen called the "Curse of Tecumseh." These are names we have discussed here at Twilight Language. 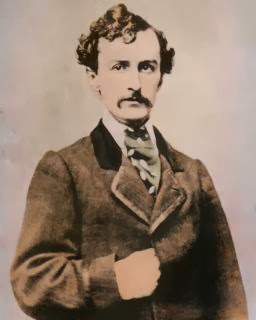 John Wilkes Booth (1838 - 1865) was a Freemason and an American stage actor who headed the plot to attempt to kidnap and then assassinate President Abraham Lincoln. JWB was the younger brother of Edwin Booth, also a Freemason and stage actor. According to some sources, because of Wilkes' notoriety, the Freemasons have quietly removed his name from their membership records.

Edwin Booth (1833 - 1893), Freemason, Shakespearean actor, was the older brother of American stage actor and assassin John Wilkes Booth. Edwin was initiated in the New York Lodge No. 330 on September 11, 1857. Edwin once declared, "...to be Worshipful Master and to throw my whole soul in that work, with the candidate for my audience, and the lodge for my stage, would be greater personal distinction than to receive the plaudits of the people in the theaters of the world." 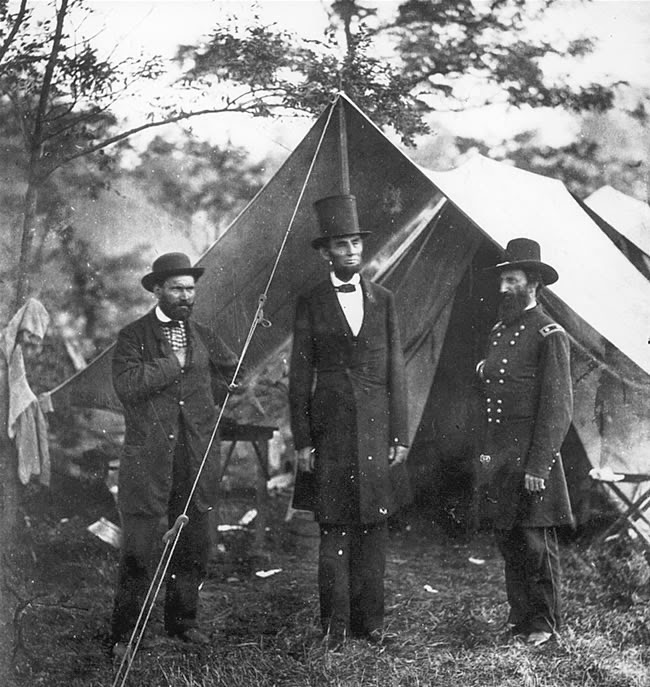 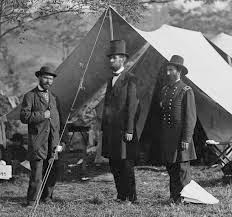 According to some conspiracy sites, these photos show "Abraham Lincoln surrounded by Freemasons who were plotting his death a few weeks before he would be shot by John Wilkes Booth."

But actually, this is "The Tent Picture" of Allan Pinkerton, outside his quarters, after the Battle of Antietam, in October 1862, with President Lincoln and General John McClernand, a former Chicago attorney. In letters from William Pinkerton, who accompanied his father during the Civil War as a 16-year-old cadet, he recalled that a portrait of the president alone had been planned, but Lincoln had ushered his two Chicago friends into the picture.

James A. Garfield (1831 - 1881) was a 14° Freemason and 20th President of the United States. His presidency ended with his assassination. He was initiated into Magnolia Lodge No. 20 of Columbus, Ohio, November 22, 1861. The third degree was conferred to him by Columbus Lodge No. 30, November 22, 1864. Garfield received the 4-14° ASSR (Southern Jurisdiction) on January 2, 1872 from Albert Pike, in Washington D.C. At his funeral, nearly all the officers of the Grand Commandery of Ohio, 14 commanderies of that state, and 8 commanderies from adjacent jurisdictions were present and participated in the funeral cortege.

William Tecumseh Sherman (1820 - 1891), one of Lincoln's generals, was allegedly a brutal American Civil War Union commander. His war polices of "scorched earth" against the South earned him the reputation, according to some authors, as the first "modern general." His burning of Atlanta is well-known. The name "Tecumseh" has been a hidden moniker linking some of 2014's school shootings. 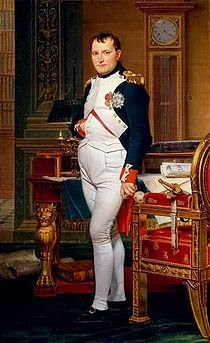 Another famed general is shown here in the painting, The Emperor Napoleon in His Study at the Tuileries, by Jacques-Louis David, 1812.

Napoléon Bonaparte (1769-1821) was 5 feet, 7 inches, which was normal for his time, but the British newspaper cartoonists had him shown as much smaller for political reasons. His famous "hidden hand" images were a broadcast signal of his links to the Freemasonry Brotherhood. 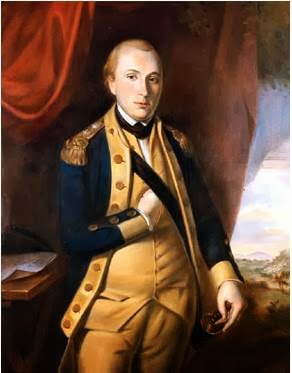 Marquis de Lafayette (1757-1834), a 33° Freemason and French military officer, was a general in the American Revolutionary War and a leader of the Garde Nationale during the bloody French Revolution. Lafayette was also made an honorary Grand Commander of Supreme Council of New York. More than 75 Masonic bodies in the U.S. have been named after him, including 39 lodges, 18 chapters, 4 councils, 4 commanderies, and 7 Scottish rite bodies. See also the Fayette Factor. 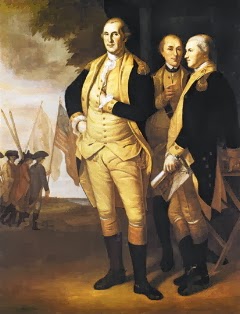 George Washington (1722-1799), a Freemason, whose membership is well-known and celebrated. 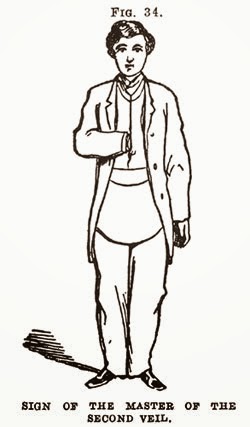 As ever Loren fascinating.

I'm struck by how some o' these hand hiders maintain a very disciplined rectangular/setsquare arm shape but others assume a much more relaxed form.

Could some o' em be merely copycattin' without fully graspin' what the form means [which isn't quite the same thing as suggestin' some mightn't be masons]?

I'm also struck by the beauty in the eye o' the beholder factor.

Various doctors lookin' at such poses possibly wonder why bein' in the Masons gives y'bad gas.

Members o' the mafia might think so these're the guys who whacked people for the Masons [an' in John Wilkes Booth case they might be right].

Various Kabbalists Hindus Sufists an' Buddhists might assume the individuals concerned were indicatin' their rank by chakra an' further wonder whether they got past the leprous heart stage where the individual begins t'grasp their own heedlessness o' God's Will an' if so do later photos show 'em with their now cleansed hands fully visible against the chest [meanin' they no longer flee from the testing effects o' *Wise Serpent* power unleashed].

Kabbalists Hindus Sufists Buddhists etc of course all maintain it's possible t'store huge caches o' data in a single word/phrase or whole teachings in the name of a teacher or the title of a book.

But then so do left hand pathers which's why I find meself won'drin' whether I'm imagin' it or is there really a huge world wide increase in these Twilit Lingual tinged deaths [especially the mass shootin' type]?

Or even if there isn't whether you y'self've noticed the various lingual memes you've longed identified startin' t'crop up in foreign language garb or whether locations where English's yet t'take hold've in fact evolved an entirely diff'rent set o' such lexical *hints*?

I love how the "hidden hand" of Masonic influence in deep politics is right out there in the open, so to speak. Although, there appears to be hands hidden within hands...

Those 'Tent pictures' w/ Lincoln have an odd character to them. There's more going on in them than just the 'Hidden Hand'. Where precisely where they? What is the deal w/ their orientations - how do you have a picture w/ the President -one which takes a significant period of time to expose -and you aren't facing the camera? I don't know enough of the masonic vocabulary to know where to go next, but there is an interesting story in there. Who took those pictures? Just that there are 2 of the same pose is bizarre for that time.

One of the more innocent looking "hidden hand" pictures of the Beatles out in a field with Paul McCartney only showing a hidden hand sign - I believe is more than just a flippant gesture.
If you have a look at the cover of his "Red Rose Speedway" LP he's having a red rose "silencing" his mouth. I feel that he's secretly telling us he's a Rosicrusian. Did he get to this using drugs - "speedway"?
George Harrison told he got into the Indian religion after hearing the words : "the gurus of the Himalayas" while under the influence of LSD.
The Rosicrucians are a mainly catholic cult - a forerunner of the freemasons.