It is a full moon on February 14, 2014, from Albania to Sochi, from Alaska to Xinjiang. May everyone be safe on this Bloody Friday.

I have low expectations for humans on February 14th. The love and romance associated with Valentine's Day seem to turn into killings of different varieties. It is as if, of all the days during the year, this one brings forth the most tension for a few individuals.

Extend this to what has been occurring with homicidal-suicidal feelings recently, and the outcomes are tragic. School shootings, domestic violence in murder-suicide clusters, workplace violence, and more. Are mall shootings, church killings, terrorist attacks, and new domestic murder-suicides in our near future? Does Valentine's Day have an international reach? Will violence visit global locations on February 14th?

On February 14, 2008, six people were dead due to a Northern Illinois University shooting, including the gunman. There were 22 casualties in all.

Yesterday, I received a call from a reporter based in Montreal for the Globe and Mail newspaper. He discussed with me, as he described them, "a recent series of multiple murders involving rage-filled men killing their lovers or ex-lovers and their loved-ones. Three cases involving a total of about 10 deaths, in the space of about 2 weeks."

I pointed out that Valentine's Day could be a day to watch out for and warn about in his article. Unfortunately, the reporter Les Perreaux felt the story won't get published until the weekend due to the fact there just had been a new murder-suicide, on Thursday, February 13th.

This topic hits close to home for me, and I've always acknowledged that. 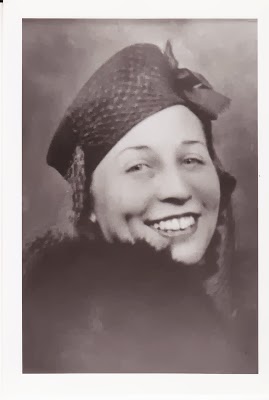 My book, The Copycat Effect, is dedicated to my maternal grandmother (pictured above), who died in a Valentine's Day murder-suicide.

I penned that dedication this way:

The grandmother I never knew,
as she was killed during a murder-suicide
on Valentine’s Day, 1940.

In my book I wrote an entire section entitled the "Significant of Dates," and began with one special example, St. Valentine's Day. I reprint below what you will find in my book about February 14th, from pages 246-247:

Dates are important, anniversary events especially so. Suicides, murder-suicides, murders tend to clump around dates of loss for at-risk victims.

One such date is one that most people assume should be associated with happy feelings, but it is not. That is Valentine’s Day. For many people, it’s a day that speaks more to emptiness and loss than to joy and love.

One cultural event seems to point to this feeling: the “St. Valentine’s Day Massacre” of February 14, 1929, in Chicago. On this day the alleged henchman of gangster “Scarface” Al Capone murdered seven members of the George “Bugs” Moran gang in a North Clark Street garage. Colorful names, a memorable day, the windy city, a grand crime, and huge headlines have made this event enormously “infamous” in history. Books and movies have fueled the copycat effect of this date.

A year after “St. Valentine’s Day Massacre,” Ben Hecht...authoredScarface(1930), which was made into a Howard Hughes produced, Howard Hawks directed movie (1932) about the North Clark Street killings. Hughes supposedly asked that Scarfacebe "realistic, as exciting, as grisly as possible." Censors blocked Scarfacefor two years before Hawks got it to theaters.

How does culture make a 1929 event into currency for a future generation? Through the movies and other media, of course. Some Like It Hot(1959) had Jack Lemmon and Tony Curtis playing two Chicago musicians who witnessed the St. Valentine's Day Massacre and are forced to cross-dress as women in order to hide from Al Capone. The St. Valentine's Day Massacre(1967) starring Jason Robards portrays the event in docudrama style.

But beyond fiction, real murders and murder-suicides have also been linked to the specific Valentine’s Day 1929 gangland murders. The gangland and other ripples from the St. Valentine’s Day Massacre certainly demonstrate an awareness of the twilight language of the event.

The individual most often identified as the organizer of the Moran gang killings was Jack "Machine Gun" McGurn, one of Capone's most trusted men. McGurn (whose real name was James DeMora), an expert with the Tommy gun who had an “eye for the ladies,” especially for blonde women, was killed on the eve of Valentine’s Day, 1936. A nickel was put in McGurn's right hand and, next to his body the killers left a humorous valentine card.

Sometimes personal histories reinforce the negative Valentine’s Day link. My grandmother was killed by her second husband on Valentine’s Day, 1940, in Illinois, in a murder-suicide, as my future mother, a 12 old girl, looked on in horror. The copycat effect sometimes hits close to home.

During the 1980s, St. Valentine’s Day was a focus of teen suicide clusters around the United States, and many families felt the impact of the day.


Earlier in the book, I described a teen suicide cluster in Peekskill, New York. I mentioned on February 4, 1984, Robert DeLaValliere, 13, hanged himself in Depew Park, and then I wrote:


Did another teen then imitate DeLaValliere? Ten days after his suicide, 14‑year‑old Justin Spoonhour picked a tree in back of his home and hanged himself. Spoonhour lived in Putnam Valley, five miles north of where DeLaValliere died. His mother graphically described in a People magazine article how she found her boy. "I turned my light on and saw Justin hanging from a tree,” she wrote. "His eyes and mouth were open, and his tongue was swollen and protruding." As we have noted, this was Valentine’s Day in Peekskill.

Elsewhere in The Copycat Effect, Valentine's Day figures as a touchstone for understanding the context of violence in which we find ourselves. I noted:

In 2002, National Review online editor Jonah Goldberg, a conservative, commented on liberal Senator Patrick Moynihan’s 1993 essay, “Defining Deviancy Down,” to make some points about the media’s normalizing of terrorism. Goldberg’s and Moynihan’s insights apply here, in understanding how the media makes “celebrities” of events, which then serve as cultural icons that are held up for emulation by followers. In this way, copycats are produced. Calling the essay “one of the most influential articles of the last decade,” Goldberg notes that “Moynihan argued that deviancy - crime, mental illness, out-of-wedlock births, etc. -- had become so rampant, had so thoroughly soaked into the culture, that we simply had to redefine the abnormal as normal to cope.”

“Moynihan's most famous example was the St. Valentine's Day Massacre,” noted Goldberg. “That event was a major turning point in American history, credited with helping to convince Americans to abandon prohibition…The actual details? Four gangsters murdered seven gangsters. In the early 1990s, Moynihan noted, Los Angeles suffered from the equivalent of one St. Valentine's Day Massacre every weekend. And, of course, we can say much the same about suicide bombings in Israel.”

The above passages are from my 2004 book, The Copycat Effect: How the Media and Popular Culture Trigger the Mayhem in Tomorrow's Headlines, a work the American media does not wish you to buy or read. In Canada, intriguingly, they are more open to research findings and the lessons learned.

Posted by Loren Coleman at 7:33 AM

I just wrote about today's Valentine's Day being the 25th anniversary of the Ayatollah Khomeni's "Fatwa" against writer Salman Rushdie. Each year, Iran sends Rushdie a Valentine's Day card saying they still plan to kill him for writing "The Satanic Verses."