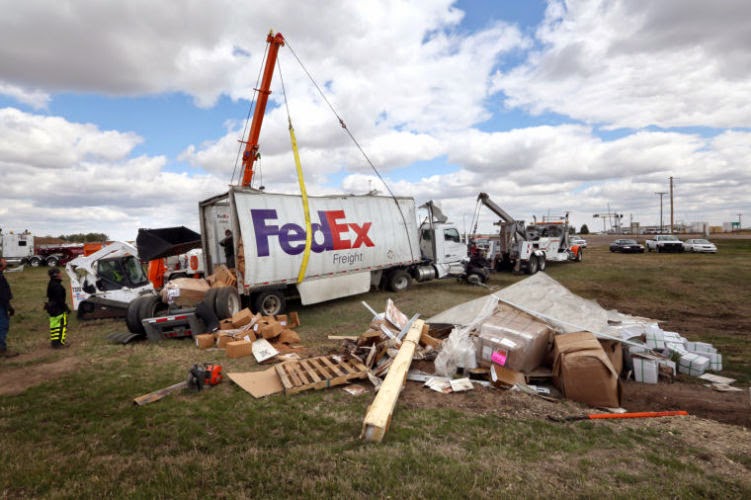 The Rambo-style shooting at a FedEx facility in Kennesaw, Georgia, Cobb County, made news on April 29, 2014, leaving one dead and six injured.


That called forth this summary from correspondent Robert Sullivan:

The Christian Science Monitor also noted, when the California bus was hit by the FedEx truck, that...


In mid-February, a FedEx truck making a pick up in Sweetwater, Texas, caught fire. Later that month, a FedEx tractor trailer caught fire and was totally destroyed along I-81 near Roanoke, Virginia. In March, a FedEx truck fire shut down a portion of I-80 near Park City, Utah.

Now comes another one for the FedEx file from RS:

On Wednesday morning, April 30, 2014, two Oklahomans were identified as those killed in a traffic accident that involved a FedEx semi-trailer truck (pictured at top) a mile west of Greensburg.

Aurora Diane Balch, 35, and Donald Anthony Barrs, 27, both of Weatherford, Oklahoma, were killed in an accident shortly after 3:30 a.m. at the intersection of U.S. 54 and U.S. 183 in Kiowa County, according to a Kansas Highway Patrol report.

Balch was driving a 2006 Chrysler north on U.S. 183 when she failed to yield the right of way at the intersection. There is a sign at that location that requires U.S. 183 traffic to stop.

The westbound semi struck the Chrysler on the passenger side, where Barrs was sitting. The impact sent both vehicles in a ditch north of U.S. 54.

The semi was operated by FedEx, a highway patrol dispatcher said. The FedEx driver, Anibal Ruiz-Figueroa, 58, of Stratford, Texas, had "possible injuries."

Please note that the driver killed was yet another Aurora. I have written extensively about the moniker Aurora, see, for example, another 2014 incident and from 2012, "Understanding Aurora." The Aurora twilight name game has been on many of our minds since The Dark Knight Rises killings at Aurora, Colorado.

Kiowa County was named after the group of individuals who used the name as a self-referencing term Ka'igwu, meaning "Principal People." Another explanation of their name "Kiowa" originated after their migration through what the Kiowa refer to as "The Mountains of the Kiowa" (Kaui-kope) in the present eastern edge of Glacier National Park, Montana. In Oklahoma, in 1892, the Jerome Commission began enrolling the Kiowas, Comanches and Apaches to prepare for the opening of their reservation to settlement by whites. Kiowa County was formed in 1907. The name shows up, in good twilight lexilinking fashion, via Kiowa Gordon, an actor in three of The Twilight Saga movies.

+++
FedEx trucks and planes are involved in several relatively
underpublicized crashes, of course. 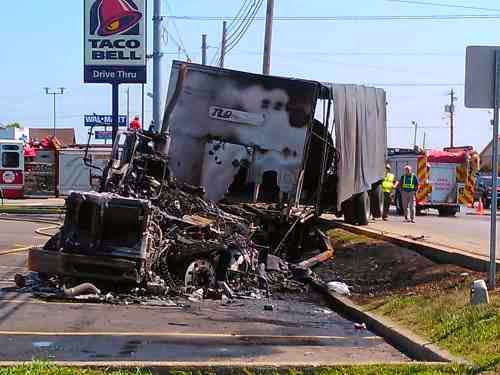 This FedEx semi truck caught fire after a crash August 29, 2012, in Aurora, Indiana. The crash occurred just after 11 a.m. in front of the Taco Bell on U.S. 50. The Taco Bell was briefly evacuated while crews put out the semi truck fire. (This is not the first time we've seen this combination of names. See "La Belle Aurore: Casablanca & Looper.")

On Tuesday, May 6, 2014, a FedEx employee riding a golf cart in the FedEx facility at Shawnee, Kansas, died when he fell off the cart.

Tuesday's accident is the third fatal incident at this same FedEx Ground sorting facility since March 2013. Links to previous reports can be found below.

Posted by Loren Coleman at 8:56 AM

Notice the reptilian "eye" as the ringer of the "Taco Bell."

Going along with the Kiowa reference...just today...

5/6/14 A 21 year old FedEx employee suddenly falls from a golf cart and dies at a FedEx facility in Shawnee, Kansas City.