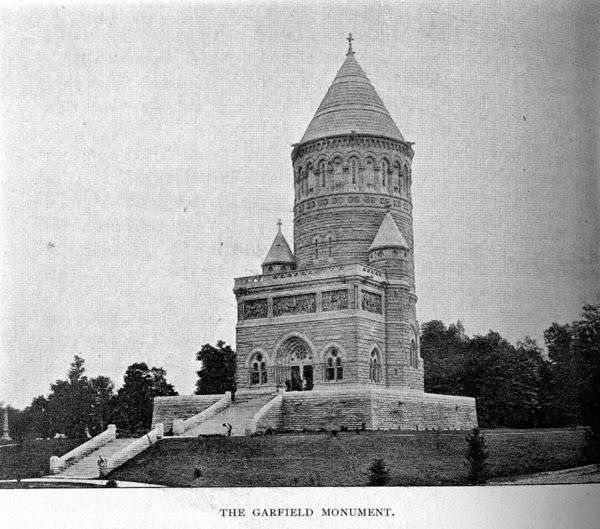 Police in Ohio say thieves have broken into the monument of President James A. Garfield and stolen a set of commemorative spoons. The vandals shattered a window to get inside the 180-foot-tall monument at Lakeview Cemetery in Cleveland Heights. A cemetery worker discovered the theft on May 7, 2014, it was announced on May 11. Police reports say cigarette butts, a T-shirt and a whiskey bottle were recovered.

President Garfield is the only president to have his casket on full display. His casket is located near the glass case from which the spoons were stolen. His wife's casket is next to his.

Another assassinated president's tomb had also once been breached. In November 1876, Irish crime boss James "Big Jim" Kennally, who ran a counterfeiting ring in Chicago, decided on a plan for the release of their engraver, Benjamin Boyd, who'd been arrested and sentenced to ten years at the Illinois State Penitentiary in Joliet. The plan was to steal Abraham Lincoln's body from its tomb, bury it in the Indiana Dunes along Lake Michigan to cover their tracks, and hold it for ransom, in exchange for a full pardon for Boyd and $200,000 (over four million dollars in today's dollars) in cash. The thieves opened the sarcophagus, but were unable to move the 500-pound, lead-lined cedar coffin more than a few inches. Instead, the plot was revealed to law enforcers and the theft never occurred. The plotters were arrested.

James Abram Garfield (November 19, 1831 – September 19, 1881) served as the 20th President of the United States (1881). Garfield, the nation's 20th president, was born in the Cleveland suburb of Moreland Hills. He was assassinated and served just 200 days in office.

On the morning of July 2, 1881, President Garfield was on his way to his alma mater, Williams College, where he was scheduled to deliver a speech. Garfield was accompanied by James G. Blaine, Robert Todd Lincoln, and his two sons, James and Harry. As the President was walking through the Sixth Street Station of the Baltimore and Potomac Railroad in Washington at 9:30 a.m., he was shot twice from behind, once across the arm and once in the back, by an assassin, Charles J. Guiteau, a rejected and disillusioned Federal office seeker. Garfield exclaimed immediately after he was shot, "My God, what is this?" One bullet grazed Garfield's arm; the second bullet was thought later to have possibly lodged near his liver but could not be found; and upon autopsy was located behind the pancreas. 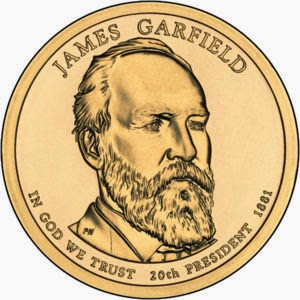 Guiteau was formally indicted on October 14, 1881, for the murder of the President. Although Guiteau's counsel argued the insanity defense, due to his odd character, the jury found him guilty on January 5, 1882, and he was sentenced to death. Guiteau may have had syphilis, a disease that causes physiological mental impairment. Guiteau was executed on June 30, 1882. He was also heard to claim that important men in Europe put him up to the task, and had promised to protect him if he were caught.


The story of the building of the Monument is as follows:

In June, 1882, the Garfield National Monument Association was incorporated, under the laws of Ohio. It was composed of the following prominent Ohioans: Governor Charles B. Foster, ex-President Rutherford B. Hayes, Senator Henry B. Payne, J. H. Wade, Joseph Perkins, T. P. Handy, D. P. Eells, W. S. Streator, J. H. Devereux, Selah Chamberlain, John D. Rockefeller, John Hay, and J. H. Rhodes. On July 6, 1882, an executive committee, with J. H. Rhodes as its secretary, was formed. Active measures were at once taken, and soon the sum of $150,000 was at the disposal of the association. Of this, Cleveland contributed $75,000; Ohio, $14,000; New York, $14,000; Illinois, $5,500; Iowa, $3,000; Pennsylvania, $1,800; Wisconsin,, $2,000; Maine, $1,600; Kansas, $1,500; Indiana, $1,400; Connecticut, $1,000; Montana, $1,900. The rest came, in varying sums, from the other States and Territories. In June, 1883, a committee composed of Joseph Perkins, H. B. Hurlburt and John Hay, issued an invitation to architects and artist to submit plans for the monument. Prizes of $1,000, $750 and $500 would be awarded. More than fifty designs were submitted. They were examined by Henry Van Brunt, of Boston, and Calvert Vaux, of New York, the most eminent architects in the country. Each made a separate trip to Cleveland, and an individual decision, but both selected the design of George Keller, of Hartford, Connecticut, and on July 21, 1883, it was formally accepted. In October, 1885, the contract for masonry was given to Thomas Simmons. Work was started, in due season, but a rumor was soon current that the foundations were insecure. Finally, the local Civil Engineer’s Club made an examination, and reported that all was safe. A like report was also made by General W. J. McAlpine, of New York, a national authority on foundations. Notwithstanding this, the committee, at its annual meeting in 1886, changed the design, reducing the height of the tower from 225 feet to 165 feet, and supplanting the castellated form with a conical roof.
May 30, 1890, the monument was formally dedicated. President Benjamin Harrison, Vice-President L. P. Morton, and a host of other celebrities, were present. The ceremonies wee held in Lake View Cemetery. They were simple, but impressive. Ex-President Hayes presided, the opening prayer was made by Bishop Leonard, and ex-Governor Jacob D. Cox, the orator of the day, made an eloquent address. Brief speeches were also made by Vice President Morton, Governor J. D. Campbell, General William T. Sherman, Secretary William Windom, Attorney-General Miller, Secretary Rusk, Bishop Gilmour, General Schofield, and Hon. William McKinley. Then the Knights Templar, of the Grand Commandery, concluded the ceremonies, with their impressive service. There were over 5,000 men in line for the procession.
The monument is erected in the loftiest and most beautiful spot in Lake View Cemetery. Its shape, for the most part, is that of a tower, fifty feet in diameter. Steps lead to the landing, which is constructed about the base of the building. A romanesque porch supports the tower. Below the porch railing, there is an external decoration, a frieze of historical character, showing in its five panels characteristic scenes from Garfield’s life. The great doors of oak open in a vestibule vaulted in stone, and paved with mosaic. From this, spiral staircases ascent the tower, and descend to the crypt. In this crypt is the casket containing the coffin. Opening from this vestibule, is the chamber where the statue, by Alexander Doyle of New York, stands. It shows Garfield in the House of Representatives. Over the statue, supported by granite columns, is a dome twenty-two feet in diameter, which is decorated with a marvelous frieze of Venetian glass, showing an allegorical funeral procession of the dead President. The tower has thirteen magnificent memorial windows, from the original thirteen States. The monument is built of native sandstone.


THE CITY OF CLEVELAND

ITS SETTLEMENT, RISE AND PROGRESS.
1796-1896
BY
JAMES HARRISON KENNEDY,


Editor of "The Magazine of Western History;"
Author of "The Early Days of Mormonism;"
"The American Railroad;" "Three Witnesses
of the Book of Mormon;" "The Bench and Bar
of Cleveland," etc. Corresponding Member of the
Western Reserve Historical Society, etc., etc.
Illustrated with Maps, Portraits and Views.
CLEVELAND: The Imperial Press.
MDCCCXCVI
1896

Attending the "impressive" dedication ceremonies were former President Rutherford B. Hayes, then current President Benjamin Harrison, and future President William McKinley. Garfield's Secretary of the Treasury, William Windom, also attended the ceremony. President Harrison stated that Garfield was always a "student and instructor" and that his life works and death would "continue to be instructive and inspiring incidents in American history". Five panels on the monument display Garfield as a teacher, Union major general, an orator, taking the Presidential oath, and his body lying in state at the Capitol rotunda in Washington D.C. from September 21, 1881 – September 23, 1881. The U.S. has twice had three presidents in the same year. The first such year was 1841. Martin Van Buren ended his single term, William Henry Harrison was inaugurated and died a month later, and then Vice President John Tyler stepped into the vacant office. The second occurrence was in 1881. Rutherford B. Hayes relinquished the office to James A. Garfield. Upon Garfield's death, Chester A. Arthur became president.

Portions of this blog, in terms of photos and content, are reprinted under the
Fair Use Doctrine of International Copyright Law
as educational and/or editorial material
of which commentary is made,
without benefit of financial gain.
This is applicable throughout
the entire Twilight Language blog.
Some sources may be attributed above in embedded links,
as well as mixtures and various tidbits from Wikipedia.

Posted by Loren Coleman at 7:41 PM

Was discussing this over dinner with friends this evening. Very curious. Back in October, I wrote a piece for Red Dirt Report called "Ticket to Hatfield" where I sync a multitude of curious incidents together. I also discuss President Garfield's assassination, writing: "Of course it was the crazed Charles Guiteau who tried to murder President Garfield with his British-made .44 caliber Webley Bulldog revolver. Of course there is an undeniable John Lennon sync here. Lennon’s 1968 song “Hey Bulldog” and the 1966 album Revolver are said to be clues to Lennon’s assassination just under 100 years after Garfield’s assassination. Lennon’s assassin, Mark David Chapman, used a .38-caliber revolver.

When Guiteau shot Garfield, the wounded president exclaimed: “My God! What is this?” It would be two months before the stricken commander-in-chief would succumb to his injuries, having said before his death: “Oh! Why am I made to suffer this cruel wrong?”