See also The Twilight Language of the San Bernardino Event, for more on jargon and the name game. 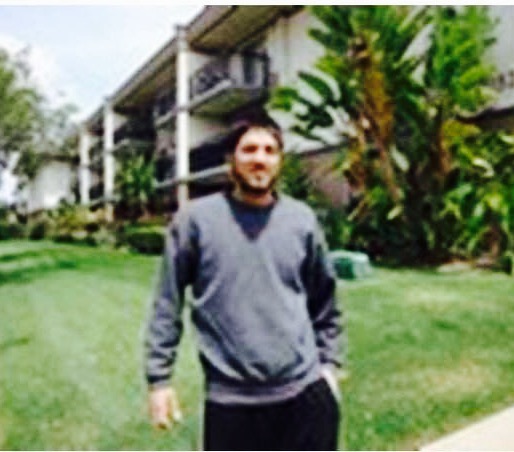 The two suspects killed in a gunfight with police after a mass shooting in San Bernardino were Syed Farook and Tashfeen Malik, said San Bernardino Police Chief Jarrod Burguan.

Burguan said police are now "pretty comfortable" that Farook and Malik were the only shooters involved in the massacre that left at least 14 people dead at the Inland Regional Center. Police earlier suggested there were three shooters.

Farooq (also transliterated as Farouk, Farook, Faruk, Faroeq, Faruq, or Farouq; Arabic: فاروق‎, Fārūq ) is a common Arabic given and family name derived from an honorific of Umar, an early Muslim leader. Al-Farooq literally means, "the one who distinguishes between right and wrong." Sent in by RS.

Sayyid (also spelled "Seyd", "Syed", "Sayed", "Sayyed", "Saiyid", "Seyed" and "Seyyed") (pronounced [ˈsæjjɪd], or [ˈsæjjed], Arabic: سيد‎; meaning Mister) (plural Sadah Arabic: سادة‎, Sāda(h)) is an honorific title denoting males accepted as descendants of the Islamic prophet Muhammad through his grandsons, Hasan ibn Ali and Husayn ibn Ali, sons of Muhammad's daughter Fatimah and his son-in-law Ali (Ali ibn Abi Talib). Conventionally, descent is patrilineal. However, in 1632 when an Ottoman court challenged a man wearing a sayyid's green turban he established that he was a sayyid on his mother's side, and this was accepted by the court.
Daughters of sayyids are given the titles Sayyida, Alawiyah, or Sharifa. In some regions of the Islamic world, e.g., India, the descendants of Muhammad are given the title Amir or Mir, meaning "commander", "general", or "prince".
In the Arab world, it is the equivalent of the English word "liege lord" or "master" when referring to a descendant of Muhammad, as in Sayyid Ali Sultan. This is the reason the word sidi (from the contracted form sayyidī, 'my liege') is used in the Arabic. Source.

Malik is also one of the Names of God in the Qur'an, and is then al-Malik(الملك)  or The King, Lord of the Worlds in the absolute sense (denoted by the definite article), meaning the King of Kings, above all earthly rulers. Hence, Abdelmelik ("servant of [Allah] the King ") is an Arabic male name. Source.

See more below, for more on Redlands and San Bernardino.

Was it just "workplace violence," as seems to be part of the scenario now?


Farook, an American citizen, was an environmental health specialist with the San Bernardino County health department, which was hosting the holiday party at Inland Regional.

He had worked there for five years.

In an online profile, he described himself as a "22-year-old Muslim Male living in USA/California/riverside. Religious but modern family of 4, with 2 girls and 2 boys."
He "enjoys working on vintage and modern cars, reads religious books, enjoys eating out sometimes. Enjoys travelling and just hanging out in the back yard doing target practice with his younger sister and friends," his profile read.
Farook's brother-in-law Farhan Khan was crushed at the news.
"I have no idea why he would he do something like this. I have absolutely no idea. I am in shock myself," Khan said. "I don't have words to express how sad and how devastated I am." Source.

BTW, there was another multiple shooting on December 2, 2015, which happened before the San Bernardino event.


A gunman in Savannah, Ga., shot four people early Wednesday, killing a woman and injuring three men. Around 1:30 a.m. shots were fired in the 100 block of West 33rd Street near Barnard Street. One victim went to a nearby fire stations for help. Police found the other three other victims on West 33rd. Three men were taken to the hospital in stable condition. The fourth victim, a woman, died. Source. 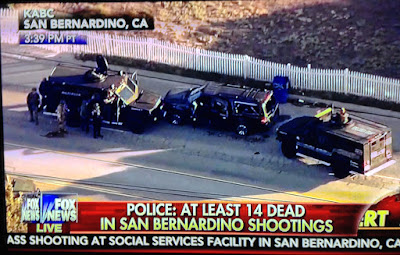 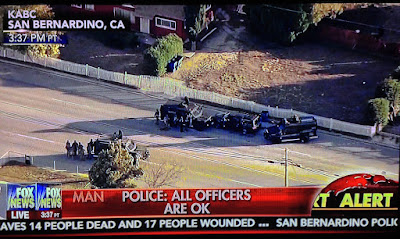 Reportedly, the SUV has Utah plates. 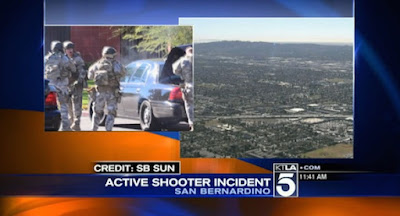 The San Bernardino Fire Department is responding to accounts of multiple (20+) victims in a San Bernardino shooting, where allegedly several shooters were being reported started around 11 a.m. Someone pulled a fire alarm. Then the shooting began. Some eyewitnesses said a county officials event was occurring, in a conference hall (with a banquet?), and the gunmen entered the conference event and shot individuals attending.

Nearby practicing SWAT teams answered the reports immediately, and some of them (one with a Masonic ball cap) were interviewed by media.

There were one to three suspects, the San Bernardino County Sheriff's Department tweeted, citing the police department. Eyewitnesses described three gunmen who were wearing masks with body armor, carrying long guns, who entered shooting and left in a SUV. 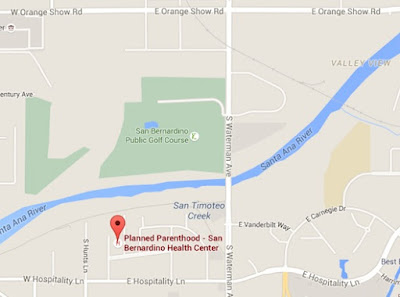 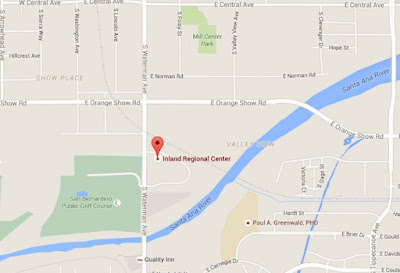 The shooting occurred at the Inland Regional Center,1365 S Waterman Ave, San Bernardino, CA 92408, a facility for people with developmental disabilities. Nearly 670 staff work at its facilities in San Bernardino and Riverside counties, providing services to more than 30,200 people.

It aims to "work on a personal, one-on-one basis with people with developmental disabilities to make their lives better as they define it."

The San Bernardino County Sheriff's Department tweeted that the "active shooter [was] in the area of Orange Show Rd/Waterman Ave near Park center." 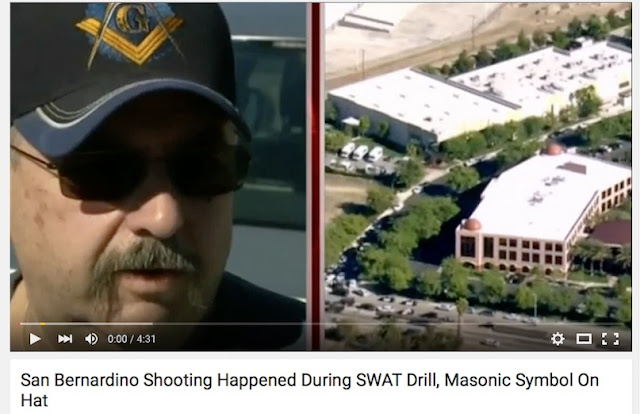 The motive behind the shootings and the way this was handled in the media may be discussed for days. 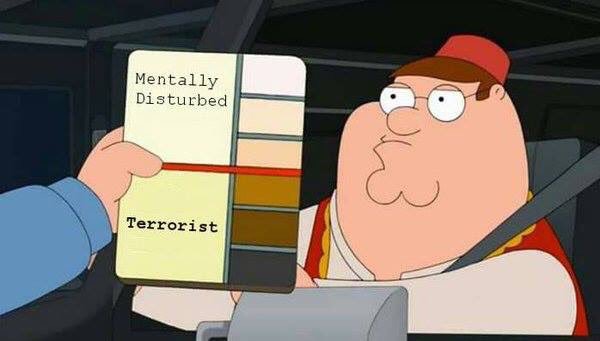 
Why Inland and Redlands? In the 1880s, the arrival of the Southern Pacific and Atchison, Topeka and Santa Fe Railroads, connecting Southern California to San Francisco and Salt Lake triggered a land boom, with speculators such as John W. North flooding the area now known as the Inland Empire. North and others saw the area, with its hot, dry climate and ready access to water as an ideal center for citrus production. The city of Redlands was soon established by Frank E. Brown, a civil engineer, and E. G. Judson, a New York stock broker, to provide a center (along with North's nearby settlement at Riverside) for the burgeoning citrus industry. They named their city “Redlands” after the color of the adobe soil.

Pharaoh's Adventure Park: 20-acre (81,000 m2) theme park which re-opened in late 2010. The park incorporates Egyptian themes, and includes a Go-Cart raceway, miniature golf, bumper cars, an amphitheater, and a water park. The park has been used in television filming, including a 2006 episode of C.S.I. Las Vegas featuring a rollercoaster accident.

The Rocketeer, in the Disney movie version, has the heroine, Jenny, hailing from Redlands.

According to the Los Angeles Times, the town in Tamara Thorne's horror novel Bad Things is based on Redlands.

The city of San Bernardino, California, occupies much of the San Bernardino Valley, which indigenous tribespeople originally referred to as "The Valley of the Cupped Hand of God".

Route 66 runs through the area. Indeed, San Bernardino hosts several major annual events, including: Route 66 Rendezvous, a four-day celebration of America's "Mother Road" that is held in downtown San Bernardino each September. One nickname for the city is The Heartbeat of U.S. Route 66.

One official nickname is Gate City, to reflect its proximity to Los Angeles, and location at the southern and western end of the Cajon Pass, leading to the High Desert and Las Vegas, Nevada.

The name of San Bernardino is for Saint Bernardino of Siena, O.F.M. (also known as Bernardine; 8 September 1380 – 20 May 1444) was an Italian priest, Franciscan missionary, and is a Catholic saint. He is known in the Roman Catholic Church as “the Apostle of Italy” for his efforts to revive the country's Catholic faith during the 15th century. His preaching was frequently directed against gambling, witchcraft, sodomy and usury - particularly as practiced by Jews.

December 2 is special in Israel and Palestine.
1947 – Jerusalem Riots of 1947: Riots break out in Jerusalem in response to the United Nations Partition Plan for Palestine.

Cuba and Castro have always done special things on December 2nd.
1956 – The Granma reaches the shores of Cuba's Oriente Province. Fidel Castro, Che Guevara and 80 other members of the 26th of July Movement disembark to initiate the Cuban Revolution.
1961 – In a nationally broadcast speech, Cuban leader Fidel Castro declares that he is a Marxist–Leninist and that Cuba is going to adopt Communism.
1976 – Fidel Castro becomes President of Cuba, replacing Osvaldo Dorticós Torrado.

Also on December 2, 1993, in an unemployment office in Oxnard, California, a workplace shooting occurred. Five people were killed, including the gunman who died by "suicide by cop" and four others were wounded.
Posted by Loren Coleman at 3:28 PM

Shooting occurred on Waterman. Boston Bomber was found in a boat in Watertown.

"There was a guy working with a water truck, filling up off of a fire hydrant across the street from us -- directly in front of the Inland Regional Center -- who came racing over to our facility looking for shelter saying, 'It sounds like someone is shooting people over there.' http://www.bostonherald.com/news/local_coverage/herald_bulldog/2015/12/witness_i_saw_suv_leaving_san_bernardino_shooting_scene

Dec. 2nd is the Feast Day of Saint Bibiana, whose name is close to the Latin "bibere", which, "to drink".

The suspects were found at a house in Redlands, and after a high-speed chase two are dead and the third in custody. Is this part of your "red dawn" complex?

Eagles of Death Metal have a song, "San Berdoo Sunburn", it's about driving from Carolina to San Bernadino.
https://www.youtube.com/watch?v=_B6lOPAvx1I

Anyone else noticing that Inland Regional Center was used for active crisis drill? (I think that day.) So did Paris, Boston Marathon, Sandy Hook . . .

The word "fluid" was used in over abundance during the live broadcast. At least 12 times in an hour. The police chief used it followed by every reporter on at least 3 networks. CNN, NBC and KTLA all used it in describing the event. Even the helicopter pilot used it. "The scene is fluid", "the action is fluid" etc. This was a personal sync for me because I'd been thinking about the word for 2 days after reading an article about Johnny Depp's daughter where she was described as fluid.

I predicted Islamist extremism around Christmas in October, based on the "Bad Christmas" omens such as those related to the Perchten, the film Krampus, the Halloween downing of the Russian airliner, etc.
But there are possibly yet worse omens.
Among the victims were:
Aurora Godoy = dawn of the gods = Götterdämmerung = Ragnarök.
Juan Espinoza = thorny warrior = Thor.

I contend that this event was NOT the result of a workplace dispute, even if that was a contributing conscious factor.
This was a battle of the "gods" acting through their slaves, their instruments.
By "gods" I mean collective subconscious entities.

On none other than 11 September 2015, none other than Thor struck none other than Muslims in Mecca with his hammer during a lightning-storm whereby a large crane crushed pilgrims on the hajj.
Thor plays an important role in the Ragnarök/Ragnarökkr, the dawn of the gods.

Getting to this late, but Redlands also has a pretty significant museum and shrine dedicated to Abraham Lincoln http://www.lincolnshrine.org

(and fwiw, Hangar 24 Brewery at the Redlands Airport makes some pretty fantastic beer)