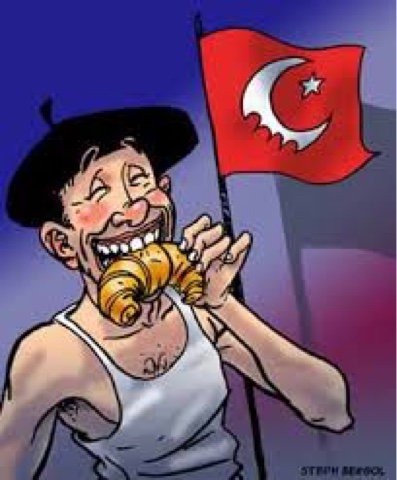 August 5, 2016 is the 300th anniversary of the Battle of Petrovaradin or Peterwardein, a decisive victory for Austrian forces in the war between Habsburg Monarchy of Austria and the Ottoman Empire of August 5, 1716, at Petrovaradin (then part of Military Frontier, Habsburg Monarchy; today part of Novi Sad, Vojvodina, Serbia). This was the beginning of the end of the Ottomans. After the war, a church commemorating this event was built on Tekije, on the hill over battlefield, and is dedicated to Our Lady of Tekije, also known as Our Lady of the Snows. The church is special, because it has both Catholic and Orthodox altars and both Christian denominations use it. The site is a place of pilgrimage on every August 5. 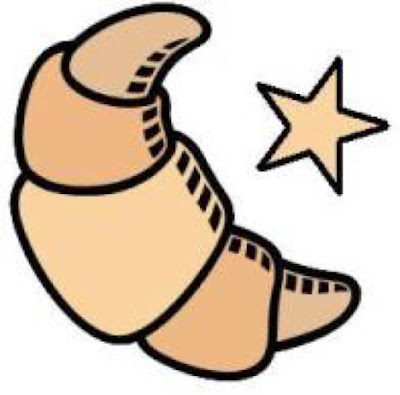 After the battles that defeated the Ottomans, they had lost most of their European domains 300 years ago. "Viennese bakers celebrated their deliverance with what came to be called the croissant, a pastry in the shape of the Muslim crescent. Take a bite out of Islam?" notes one anti-jihadist site.


The earliest story dates to 1683, during the Ottoman Turks siege of Vienna. Legend has it that a baker working late at night heard the Turks tunneling under the walls of the city and alerted the military.
The military collapsed the tunnel in on the Turks and eliminated the threat, saving the city. The baker baked a crescent shaped pastry in the shape of the Turk’s Islamic emblem, the crescent moon, so that when his fellow Austrians bit into the croissant, they would be symbolically devouring the Turks. Source.

Many people have heard that the croissant was created in 1686 in Budapest, Hungary by a courageous and watchful baker, at a time when the city was being attacked by the Turks. Working late one night, he heard odd rumbling noises and alerted the city's military leaders. They found that the Turks were trying to get into the city by tunnelling under the city's walls. The tunnel was destroyed and the baker was a hero, but a humble hero — all he wanted in reward was the sole right to bake a special pastry commemorating the fight. The pastry was shaped like a crescent, the symbol of Islam, and presumably meant that the Hungarians had eaten the Turks for lunch.

This merely demonstrates the many-sourced legendary nature of the croissant origins story.

The connection between the croissant as an anti-Islamist symbol is clear, nevertheless.
The 100th anniversary of the August 5, 1916, World War I, Battle of Romani, in which the Allied forces, under the command of Archibald Murray, defeat an attacking Ottoman army under the command of Friedrich Freiherr Kress von Kressenstein, securing the Suez Canal and beginning the Ottoman retreat from the Sinai Peninsula.

Two major defeats for the Ottomans and Islam, on August 5th. The invention of the croissant tied to August 5th. In the midst of war, history must not be forgotten, overlooked, or ignored. Radical terrorists are attuned to twilight language. 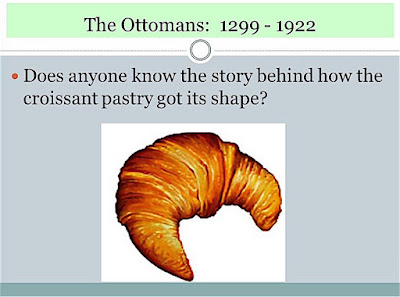 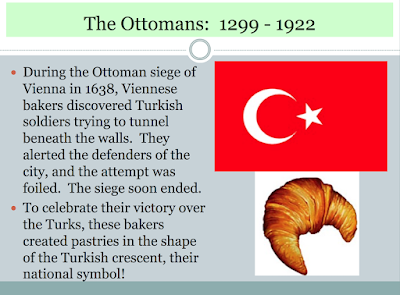 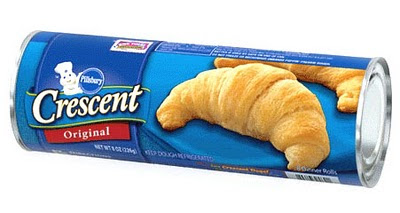 Awareness is key. Keep your guard up. Be safe. 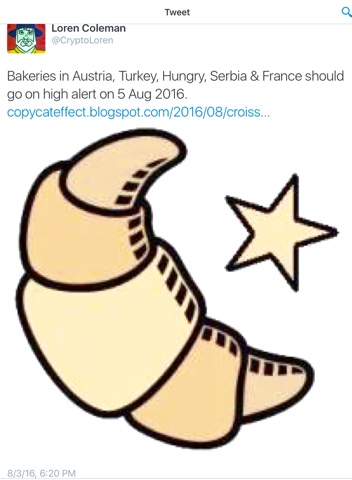 Posted by Loren Coleman at 7:51 AM

The croissant is the "star" of a french breakfast !
"Croissant" means "growing" (croître/to grow) but can be heard in french "birds language" as "croix-sans"/"sans croix", meaning "without cross".
Today (8/3) was released "suicide squad" in France...

I remember a mr Knowles's article on his site The Secret Sun where he wrote about "a calendar other than ours": http://secretsun.blogspot.fr/2015/11/paris-or-calendar-other-than-your-own.html

Starbucks serves croissants, and also has a crescent and star in its logo.
A Starbucks was near one site of the Brussels airport bombing.
Also recall the Lindt Chocolat Café siege in Sydney, Australia around Christmas 2014.

Given the subconscious symbolism, a Starbucks or other cafe may again be a target, or near one.

The English wikipedia page for “croissant” give a few more details.

According to one of a group of similar legends, which vary only in detail, a baker of the 17th century, working through the night at a time when his city (either Vienna in 1683 or Budapest in 1686) was under siege by the Turks, heard faint underground rumbling sounds which, on investigation, proved to be caused by a Turkish attempt to invade the city by tunnelling under the walls. The tunnel was blown up. The baker asked no reward other than the exclusive right to bake crescent-shaped pastries commemorating the incident, the crescent being the sympol of Islam.

He was duly rewarded in this way, and the croissant was born. The story seems to owe its origin, or at least its wide diffusion, to Alfred Gottschalk, who wrote about the croissant for the first edition [1938] of the Larousse Gastronomique and there gave the legend in the Turkish attack on Budapest in 1686 version; but on the history of food, opted for the 'siege of Vienna in 1683' version.

And then a reference to a TIME magazine story from 2013

http://newsfeed.time.com/2013/08/02/syrian-rebels-ban-croissants-in-aleppo/
Syrian Rebels Ban Croissants in Aleppo
The fatwa is based on a legend surrounding the pastry's origins

I alerted Chris Knowles to this as well: