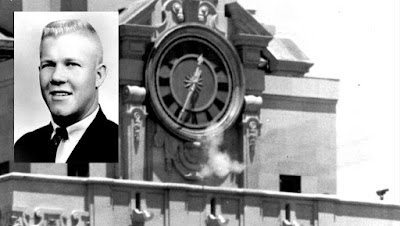 No multiple sniping incidents impacted the United States like the one committed by Charles Whitman, who was born [June 24] in Lake Worth, Florida in 1941. Early on the morning of August 1, 1966, Whitman killed his mother in her apartment and his wife at their home. At about 11:30 A.M., Whitman then climbed up to reach the University of Texas Tower (elevation of 231 feet), bringing along six guns, a shotgun, ammunition, a footlocker, knives, food, and water. On his way up, he clubbed the receptionist (who died later) on the 28th floor, and he killed two persons and wounded two others who were coming up the stairs from the twenty-seventh floor. From the observation deck of the tower, Whitman then opened fire on persons crossing the UT campus and on side streets, further killing 10 people and wounding 31 more (one of whom died a week later). For 96 minutes, he held the campus hostage. Finally, at 1:24 P.M., after several attempts, police and a deputized private citizen Allan Crum reached the observation deck, where police officers Ramiro Martinez and Houston McCoy shot and killed Whitman. Altogether, seventeen persons were killed, including Whitman, and thirty-one were wounded in what is still regarded as one of the worst sniper events in modern American history.* 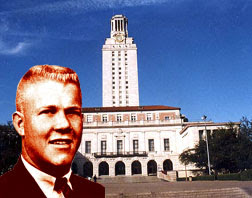 Little known today is that this event encouraged police departments across the USA to develop what came to be Special Weapons and Tactics (SWAT) teams, as Gary M. Lavergne points out in his excellent reference work on this subject, A Sniper in the Tower: The Charles Whitman Murders. The tower itself became a site of tragedy remembered and deaths produced. A series of suicides from the Tower, along with the horror of Whitman’s act, convinced the University of Texas Board of Regents to close the observation deck of the Tower in 1975. Not until 1998 was a vote taken to reopen the Tower, but only after the introduction of metal detectors, and the building of protective fencing around the deck to discourage suicidal jumpers. With those changes in place, Whitman’s sniper nest was reopened to the public in 1999. 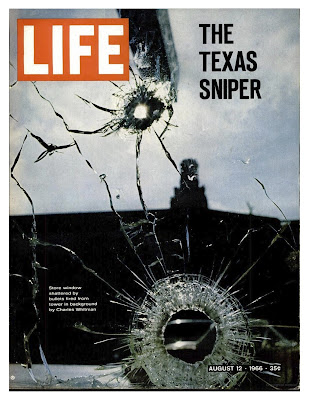 The cultural influence of the Whitman event lives on in our culture to such an extent that it colors how we look at any sniper event….From songs to movies, there are hints of Charles Whitman all around us. Singer Harry Chapin wrote a long 1970s folktune Sniper, and Texan Kinky Friedman's facetious The Ballad of Charles Whitman carried on the tradition. Kurt Russell starred in The Deadly Tower (1975), later renamed Sniper, which was set at the Louisiana State Capitol because Texas officials would not allow its use by the filmmakers. References to Whitman continue in Stanley Kubrick's Full Metal Jacket, Oliver Stone's Natural Born Killers, Rick Linklater’s Slacker, and even in Ron Howard’s Parenthood. Whitman is even credited with having an impact on the works of writer Stephen King and Unabomber Ted Kaczynski, as both have admitted. As the D.C. sniper horror unfolded, one lone sniper, Charles Whitman was brought up, over and over again, from such diverse publications as the Workers World to the Right Wing News, from New Age tracts to less than mainstream Internet sites, demonstrating the widespread nature of this person’s story was having on the D.C. snipers tale. ~ The Copycat Effect: How the Media and Popular Culture Trigger the Mayhem in Tomorrow’s Headlines by Loren Coleman (NY: Simon and Schuster, 2004).


* The number was raised to 17, officially, years later. David Gunby, 58, was shot in the lower back. He died of his wounds in 2001; the coroner ruled his death a homicide.

Charles Whitman as a Marine.

The 1995 film 'Higher Learning' directed by John Singleton of 'Boys 'n the Hood' fame features a disaffected student at a fictitious university who kills some other students with a sniper rifle from a university building rooftop, before he turns the gun on himself. It is clearly influenced by the Whitman murders.

Those dates are power-points in the old festival calendar; June 24th, the Feast of John the Baptist (and summer solstice-tide before then). August 1, Lammas, Lughnasad, Thing-tide. It was a first-harvest holiday, the cutting of the first sheath of wheat; while there may have been (and still continues to be) merry-making, there is an undercurrent of death and sacrifice as well.