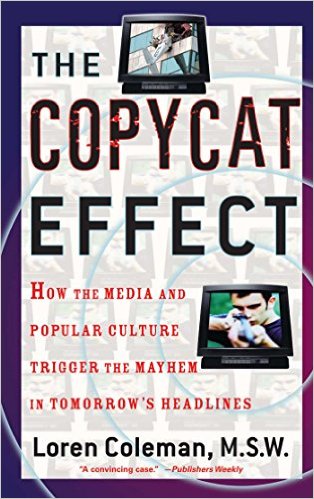 The German publication Deutsche Welle, on July 26, 2016, after a series of shootings and rampages (Amokläufe) in their country, published "Mass Killers Inspire 'Copycat' Attackers."

In the wake of all the carnage, the violence could not be ignored. The article began,

There is growing evidence that an act of mass murder will inspire others to commit similar crimes. Media reports on carnages like the ones in Munich or Japan, play a crucial role in spawning "copycat" killers.

On July 22, Ali David S. struck the Olympia shopping mall in Munich, exactly five years after right-wing extremist Andres Breivik killed 77 people in Norway. There is a possibility that the Norwegian was a role model for the Munich killer.

To me, of course, what is remarkable is that during this summer of 2014, a dozen years about it was released, the media is discovering my book.


News organizations need to pay attention to the choice of words while reporting on such incidents, says Loren Coleman, author of the book The Copycat Effect: How The Media and Popular Culture Trigger the Mayhem in Tomorrow's Headlines.

According to Coleman, one should not, for example, report on "successful" gun attacks or "failed" suicides. Stereotypes such as "the boy next door" or "loner" should also be avoided, he adds.

There is no German language edition of The Copycat Effect, but it can be obtained in English in Germany. 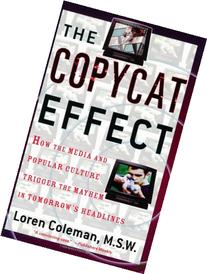 Posted by Loren Coleman at 2:42 PM