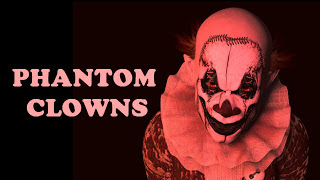 On Tuesday, April 10, 2018, I pre-recorded a Conspirinormal program interview, first about my new Mothman book, and then doing a segment on Phantom Clowns.

Then on Wednesday, April 11, 2018, there was a Beverly Hills, California incident involving a clown, kids, and a machete!

A man in a clown mask spooked a Beverly Hills neighborhood Wednesday when he reportedly wielded a machete at children.
Beverly Hills police have been patrolling the 1700 block of Carla Ridge in search of the man since at least 10:30 p.m.

Warwick Police are searching for a masked suspect who they said robbed a Warwick Avenue Dunkin' Donuts Monday night.
Officers were called to the scene around 9:30 p.m.
Police said the suspect left with an undisclosed amount of cash, dropping his mask on the sidewalk as he fled the scene. It is not known if he was armed at the time of the robbery.
According to Warwick Police, the man was wearing a black leather jacket, dark pants, and gloves. 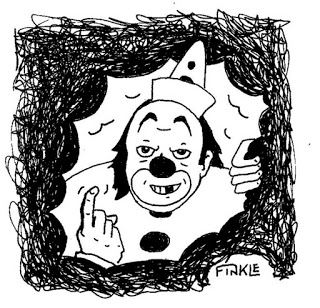 h/t Christopher Farnsworth, Adam Sayne, and others.
Posted by Loren Coleman at 9:06 PM

Shades of the Kansas City phantom clown in that first story!