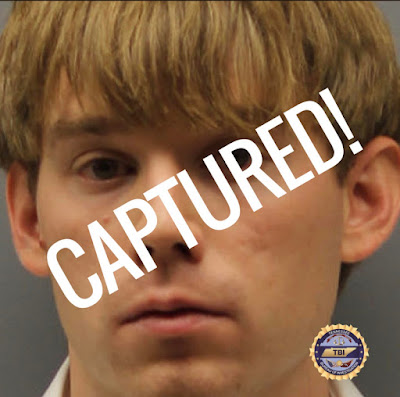 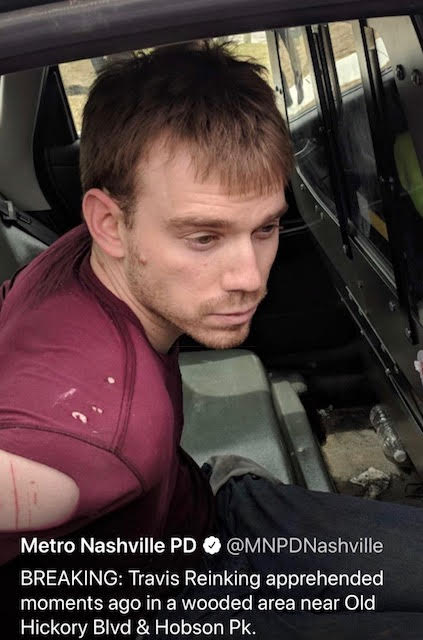 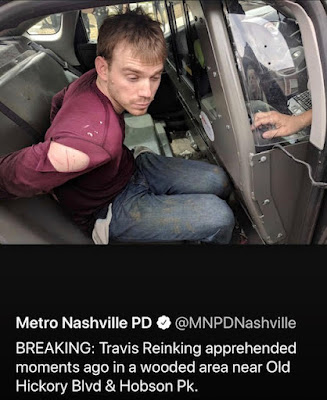 Please note that this happened at "Old Hickory" and
"Hobson" ("son of the devil," "Hobb" = Devil). 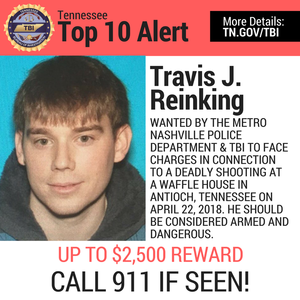 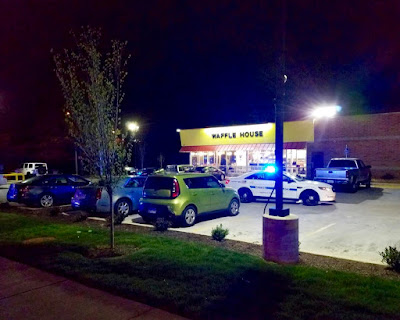 Four people were killed and at least two others were shot at a Waffle House on Murfreesboro Pike, Antioch, Tennessee, on Sunday morning, April 22, 2018, reportedly at 3:23 am local time, Metro Nashville Police said. The suspect is 29-year-old Travis Reinking of Morton, Illinois (although he allegedly may have been living in Tremont, Illinois most recently). 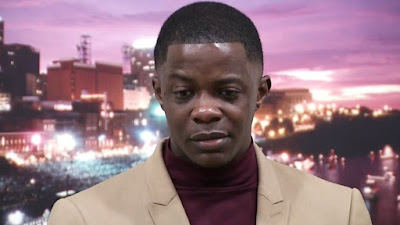 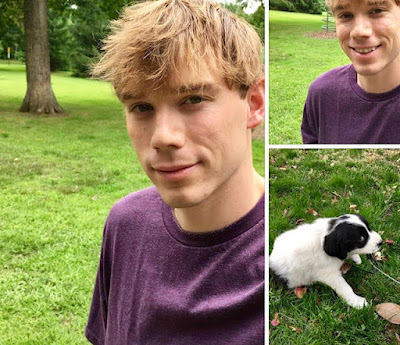 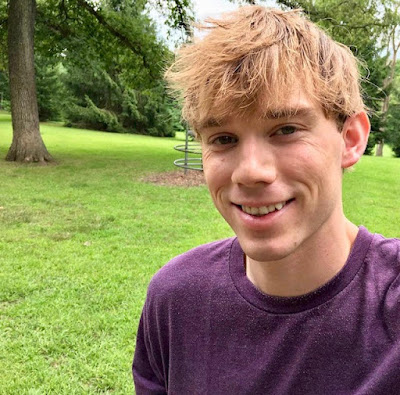 Police say the gunman was naked except for a green jacket when he opened fire at about 3:25 a.m. (4:25 a.m. ET) in Antioch, part of the Nashville area in Tennessee.

The assailant later shed his green jacket, which police found two AR-15 magazines in the pocket. Reinking later put on a pair of black pants, with no shirt. He is still at large with two guns, a hunting style rifle and a handgun.

It appears Reinking targeted African Americans at the Waffle House.

All the initial dead are people of color. 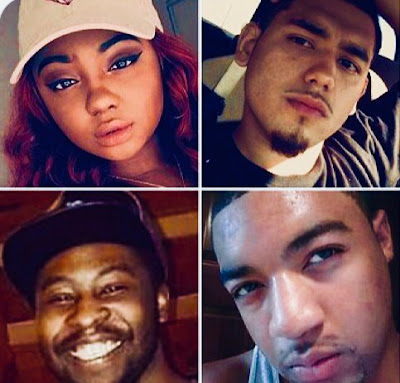 Joe R. Perez
Joe R. Perez, 20, of Nashville, was a restaurant patron who was fatally wounded as he stood outside, police said.

DeEbony Groves was killed inside the restaurant.
She was out with her Delta Sigma Theta sorority sisters before going to Waffle House.
Groves was a senior majoring in social work at Belmont University.

Akilah DaSilva
Akilah DaSilva, 23, of Antioch, was critically wounded inside the restaurant and later died at Vanderbilt University Medical Center.
He had been at the restaurant with his older brother and girlfriend, Shanita Waggoner, 21. Waggoner was also injured in the shooting.
DaSilva, known by his stage name "Natrix," was passionate about music.
He was a student pursuing a career in musical engineering at Middle Tennessee State University.
Reinking's last message on Facebook, allegedly, is from March 30, 2017, and mentions the Illuminati.

In July 2017, the U.S. Secret Service arrested Reinking for being in a "restricted area" near the White House, according to the Secret Service. After the arrest, his Illinois firearms authorization was revoked and local Illinois police seized four weapons.

"Among the weapons seized by those authorities was the AR-15 rifle used at the Waffle House today," said a Nashville police spokesman at a Sunday afternoon news conference.

On Sunday afternoon, law enforcement in Tazewell County, Illinois, held a press conference explaining their history with Reinking and his family.

They said there were concerns in the past about his mental health. In May 2016, he told Illinois police he thought Taylor Swift was stalking him and hacking into his phone. He also appeared to be suicidal at one time, according to a police report.

There were other instances of strange behavior in 2017. Reinking reportedly wore a pink dress to work while carrying an AR-15 and started yelling at someone. He also told police last year that 30 to 40 people were trying to hack into his phone.
Police believe Reinking's father, who works in the crane and construction business, received the weapons after their confiscation, and returned them to his son.


Reinking may still have two weapons as police continue their manhunt. Police believe those weapons are a hunting rifle and a handgun. 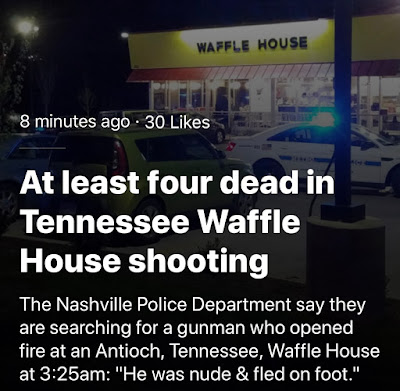 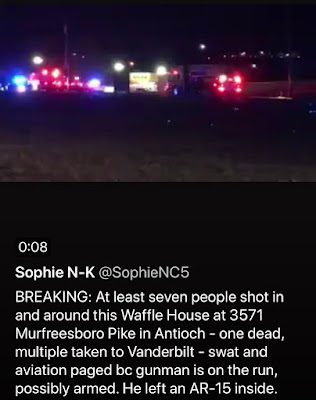 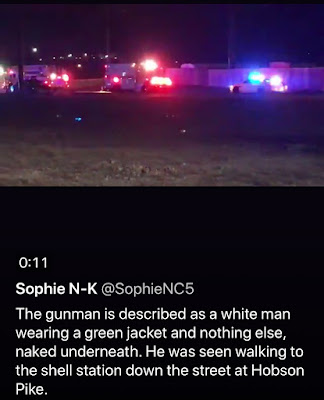 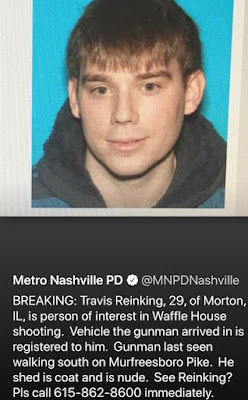 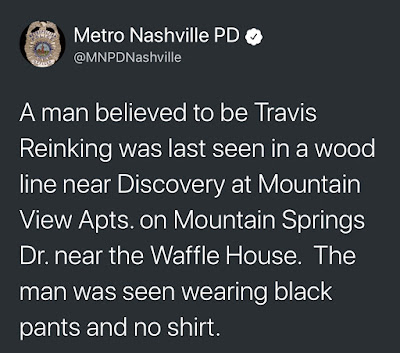 Read the 2012 article, "15 Strange Crimes That Took Place At A Waffle House." 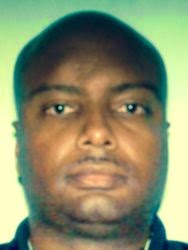 A rather infamous multiple killing occurred at a Waffle House that is east of Interstate 75 in Davie, Florida, about 10 miles southwest of Fort Lauderdale. One site says that due to these "Waffle House Murders," this location is now haunted.


Then there's the Friday, June 13, 2014 shooting at a Waffle House, near Atlanta, Georgia.

On Saturday, February 14, 2015, there were the shootings at a Waffle House in Aurora, Colorado.

Then, before today's incident, the last known Waffle House sync was related to Jessica Ford. On February 23, 2018, Ford was arrested and charged after she intentionally crashed her 2008 Chevrolet Uplander minivan into a security barrier​ at the White House, Washington D.C., while armed with a pistol, at about 2:45 pm​​.​​ Jessica Ford's last known employment was at a Waffle House, and Demos' Restaurant in Smyrna, Tennessee.

For more on Antioch, Tennessee, it's previous history of syncs, the name's meaning, and links to the moniker, see, "Antioch: A Prediction Comes to Pass," from August 14, 2015.

On September 24, 2017, a gunman wearing "a neoprene ski mask" opened fire at the Burnette Chapel Church of Christ in Antioch, Tennessee, part of the Greater Nashville Area, killing one person and injuring seven others. All involved were over 60 years old.

The suspect was identified as 25-year-old native of Sudan, Emanuel Kidega Samson, who was arrested after pistol whipping a bystander, and charged with first-degree murder. Around one week after the mass shooting the suspect said that the attack was revenge for the 2015 Charleston church shooting.
Posted by Loren Coleman at 10:02 AM

Even by the standards of paranoid mentally ill killers, Reinking is strange. His near nakedness reminds one of 'General Butt Naked' (Joshua Blahyi), and his atrocities (on a much larger scale) during the terrible Liberian civil war of the early 90's. Blahyi later experienced a religious conversion, and appeared to express genuine remorse for his crimes.
https://en.wikipedia.org/wiki/General_Butt_Naked