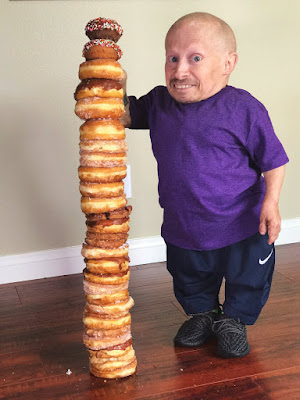 Verne Troyer, best known for playing Mini-Me in the Austin Powers comedy film series, was an American actor, stunt performer and comedian. He was notable for his height of 2 ft 8 in (81 cm), the result of achondroplasia dwarfism, which made him one of the shortest men in the world. He was also known for his brief appearance as Griphook the goblin in Harry Potter and the Philosopher's Stone.

Verne Troyer (who was born on January 1, 1969) was admitted to a hospital after an incident in his home in April 2018. He had previously been admitted to rehab to undergo treatment for alcohol addiction.

On April 21, 2018, TMZ reported that Troyer had died at the age of 49. According to an official Facebook statement, Troyer was battling depression. His family wrote, "Depression and suicide are very serious issues."

Like many little people before him, Troyer died of the result of suicide.

For as long as show business has existed, little people have been delighting audiences — usually for the wrong reasons. In the early 1800s, they were billed as "midgets" and put on display alongside oddities like the "Feejee Mermaid" in dime museums, precursors to freak shows that served as entertainment for the unwashed masses.
***
The politically correct term is "little people," abbreviated to "LPs." "Dwarf" is acceptable, the plural being "dwarfs" — not "dwarves" (which conjures Tolkien or Snow White's pals). "Midget" long has been considered offensive, referred to by many LPs as "the M-word." ~ Seth Abramovitch, "Little People, Big Woes in Hollywood: Low Pay, Degrading Jobs and a Tragic Death," Hollywood Reporter, August 25, 2016.

Besides Troyer, here are some other examples: 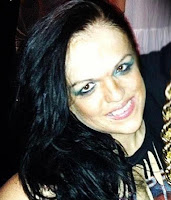 Kim Tripp, 32, starred as the little people's "Mini Kim Kardashian" at Beacher's Madhouse in Las Vegas and Hollywood Roosevelt. She was found dead on the porch of her Las Vegas apartment, on Saturday, March 20, 2016. 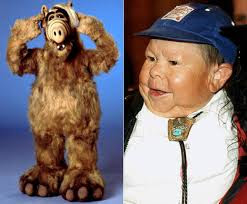 Michu Meszaros, 76, the diminutive actor behind the beloved sitcom character Alf (1986), died following a stroke, on June 12, 2016. Standing at 2 feet, 9 inches, he was well-known in the skills of juggling, acrobatics and pantomime in Hungary, and brought to the United States in 1973. He was a performer formerly known as “Michu, the smallest man in the world," as a member of the Ringling Brothers and Barnum & Bailey Circus. Besides ALF, Meszaros played Hans in Waxwork (1988), Andy in Big Top Pee-Wee (1988), Augusto in Warlock: The Armageddon (1993), and Leprechaun in Death to Cupid (2015). 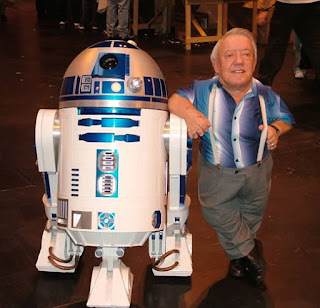 Kenny Baker, the British actor who gave life to the droid R2-D2 in the Star Wars films, died at the age of 81, on Saturday, August 13, 2016. He had been ill for years, with a lung condition. Baker, who was 3 feet, 8 inches, told his family he did not expect to live past his teen years because he was a "little person," so "it is amazing he lived this long," said his niece.

Up until his final moments, Baker was in good spirits and was watching the Olympics on television.

A dwarf, who shot to fame in 2011 after being cruelly tossed by a rugby fan in a bar, died in 2016, according to media reports of December 19, 2016. The 4 ft, 2 inches tall Martin Henderson, 42, who played a goblin in Harry Potter, was left with serious injuries following the incident, while he was out celebrating his 37th birthday.

The attack was blamed on the notorious antics of the England rugby team. It came one month after star Mike Tindall and several of his teammates admitted attending a "dwarf tossing" event in a New Zealand bar. 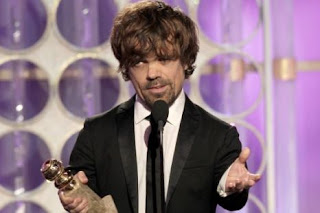 Henderson’s story went worldwide and his name trended on Twitter after Game of Thrones star Peter Dinklage asked fans to Google him during his Golden Globes victory speech in January 2012. Drinklage said: “I want to mention a gentleman I’m thinking about in England, his name is Martin Henderson. Google him.”

The actor Michael J. Anderson died in 2017. Some say he performed professional suicide with this claims against David Lynch.

The Year 2017 may be personified by the broadcast of Twin Peaks. Has Michael J. Anderson's Hollywood self-destruction late in 2016 already spelled the vanishing of "The Man from Another Place" in the revival of the series?

In an astonishing online attack, Twin Peaks cult actor Michael J. Anderson has unleashed a disturbing barrage of hate-filled vitriol on esteemed filmmaker David Lynch’s reputation. The ‘revelations’ were posted up by ‘Little Mike’ on his Facebook profile photo.
It reads: “He totally did NOT rape his own under-age daughter and then write a television series about it. She totally has NOT lived under a DEATH THREAT from her own father, all her life if she ever told. He NEVER had his “best friend” murdered. And he DEFINITELY NEVER suggested to me that I should kill myself! There’s a whole bunch of other stuff he never did either.”


The use of "little people" in the dialogue and in character in the movie In Bruges is brilliantly strategic, actually. This basically turns on a copycat effect/suicide cluster discussion that Ray seems to be having mostly as an internal dialogue, which he externalizes with Jimmy and Chloë.
===
Ray: A lot of midgets tend to kill themselves. A disproportionate amount, actually. Hervé Villechaize off of "Fantasy Island." I think somebody from the Time Bandits did. I suppose they must get really sad about like... being really little and that... people looking at them, laughing at them, calling them names. You know, "short arse". There's another famous midget. I miss him but I can't remember. It's not the R2D2 man; no, he's still going. I hope your midget doesn't kill himself. Your dream sequence will be fucked.
Chloë: He doesn't like being called a midget. He prefers dwarf.
Ray: This is exactly my point! People going around calling you a midget when you want to be called a dwarf. Of course you're going to blow your head off.
===
Ray is talking of a certain level of reality here, at least in terms of the elementary facts, but not in terms of the motivations, perhaps, which may have more to do with his own projections. 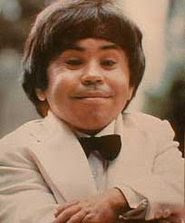 Hervé Jean-Pierre Villechaize (April 23, 1943 - September 4, 1993; pictured above) was a French actor who achieved worldwide recognition for his role as Mr. Roarke’s assistant, Tattoo, in the television series "Fantasy Island" (1978 - 1984). He was also well known for playing the evil henchman Nick Nack in the James Bond film The Man with the Golden Gun.
In the early morning hours of September 4, 1993, Hervé shot himself at his home in the Los Angeles area, and died later that day as a result of his injuries.
Is there a little person actor in Time Bandits who has died by suicide, as Ray mentions? Yes, actually, there is.
Time Bandits is a 1981 fantasy film, produced and directed by Terry Gilliam. It starred several little people. 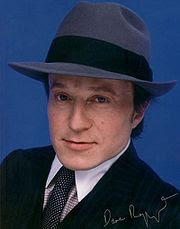 David Rappaport (above) played "Randall" in Time Bandits. David Stephen Rappaport (November 23, 1951 – May 2, 1990) was an English actor, one of the better known LP actors in television and film. At one point in his life, he became a resident of the squatter “nation” of Frestonia, acting as Foreign Minister under the name David Rappaport-Bramley - all inhabitants adopted the surname "Bramley," so in case the Greater London Council were to succeed in an eviction, they would have to rehouse them as one family.
On May 2, 1990, Rappaport died by suicide, shooting himself in the chest at a park in the San Fernando Valley, California, with a .38 calibre revolver he had bought 15 days earlier. His body was returned to the UK, and he was buried in a Jewish cemetery in Waltham Abbey, Essex.
Just before his death, he had been cast and began filming for the role of Kivas Fajo in the "Star Trek: The Next Generation" episode “The Most Toys.” Scenes he had completed were later discarded, when actor Saul Rubinek was hurriedly brought in by producers to replace Rappaport and complete the episode. Rappaport’s death and the accident which left Jack Purvis, his co-star, a quadriplegic were the main reasons why Terry Gilliam decided to shelve the intended sequel to Time Bandits, as their characters were two of the most heavily featured in the film. 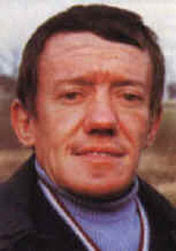 Ray, during his dwarf suicide monologue In Bruges, mentions the actor who played R2-D2, as still being around. Indeed, Kenneth "Kenny" Baker (born August 24, 1934; above) is still alive. The British dwarf actor and occasional musician, known as the "man inside R2-D2" in the popular Star Wars film series, was also in Time Bandits.
A third suicide victim is alluded to, but the person's name can't be remembered by Ray.
Perhaps this was a play on "never forget the 5th of December," the date the third little person killed himself? 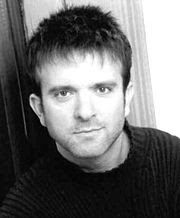 Michael Gilden (above) was an American actor (with dwarfism) born September 22, 1962, in Los Angeles, California, who died on December 5th, in Los Angeles, California.
Gilden, a familiar face in recent years, performed in a variety of television series and film including, “NCIS,” “Charmed,” “CSI: Crime Scene Investigation,” “Family Law,” “Cybill,” as well as a role as an Ewok in the film Star Wars Episode VI: Return of the Jedi. In Pulp Fiction, Gilden played the Phillip Morris Page at Jack Rabbit Slims.
Besides being an actor, Gilden was also a stock broker.
He married the now-famous short-stature actress Meredith Eaton ("Family Law," "Boston Legal") on May 20, 2001. He had a previous marriage to a woman named Elena Fondacaro, Verne Troyer's manager. Gilden and Eaton remained together until his death in a suicide by hanging (credit: Emps) at his Los Angeles home on December 5, 2006.
Little people are just people and don't seem to kill themselves at a higher rate than the general population. But In Bruges is merely a movie, right? And the dialogue was placed in the mouth of a murderer. One measures a circle, beginning anywhere, correct?
The humor-filled, balanced, horse-tranquilizing dwarf in In Bruges is Jordan Prentice (born January 30, 1973.), a Canadian actor. When he was 13, he began his film acting when he played Howard the Duck, in the movie of the same name. Perhaps it is fitting that Prentice (playing "Martin") also starred in Weirdsville (2007). Part of the plot is about dumping a body in the basement of a drive-in movie theater where a satanic cult performs ritual sacrifices.
[Upon seeing Martin, the dwarf mall security guard]
Treena: That's so cute!
Martin: Something funny?
Treena: [talking in a little kid's voice] Hi! Who are you supposed to be? You're like the little chief of police of Munchkin Land or something!
Martin: [sarcastically] A Wizard of Oz joke. That's very original. I never hear those.
If we find ourselves going further into Oz (an alternative name for Heath Ledger's Australia, I must note), then we shall be going down that yellow brick road for some time. As happened, in Bruges, of course. 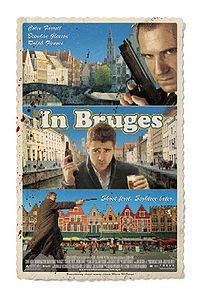 Children being killed, dwarfs, suicides, fairy tales, chase scenes through cobblestoned narrow streets, little people in hoods, canals, masks, and a confessed killer sitting in Bruges. What is real and fantasy, film or breaking news?
It all merges into a mind-boggling vortex that would make even a seasoned psychiatric professional question someone telling him these events were actual versus the creations of merely magical thinking. 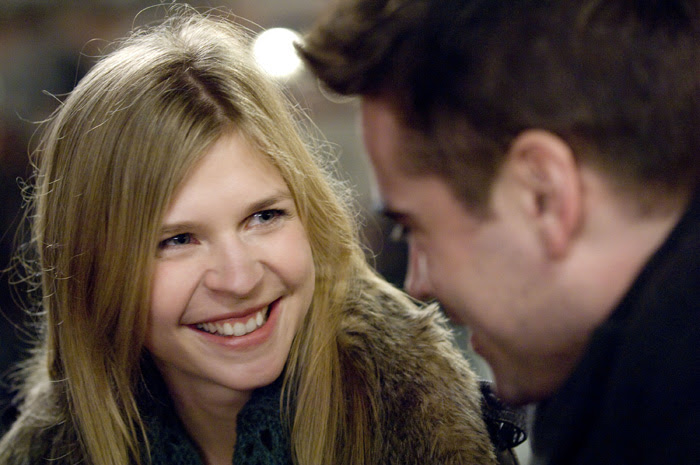 He was literally a white dwarf (Hollywood) star.
As above so below?