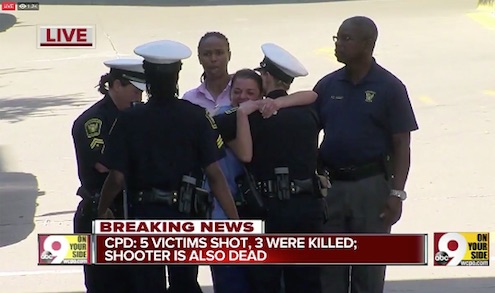 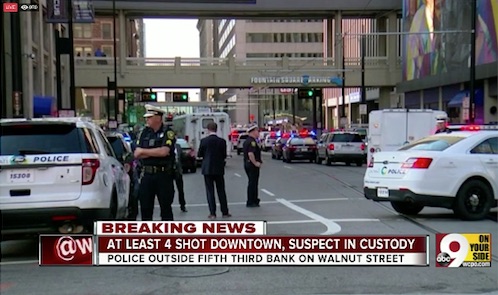 An early incorrect report said the police had detained a suspect in a shooting Thursday, September 6, 2018, at a Fifth Third Bank in Cincinnati's Fountain Square, a police dispatcher said. Details of the multiple shooting were not immediately available, but the dispatcher said the situation is no longer active, and a suspect was in custody. But the gunman was not in custody. 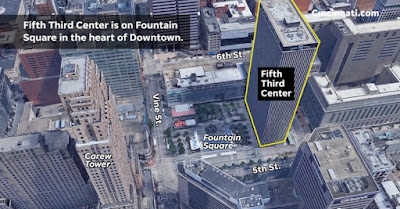 At 9:11 am local time, a white male in a business suit with a handgun began shooting individuals at the 5th 3rd Center Tower's loading dock and what was first said to be in the bank's lobby. Instead, individuals were shot in a familiar Cincinnati ice cream parlor, Graeter's Fountain Square.

Several people were transported to the hospital. The suspect was deceased. Additionally, three of the five injured were dead. 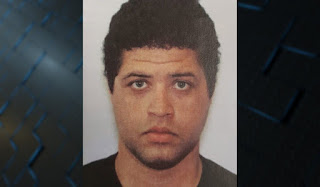 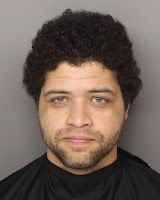 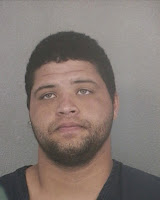 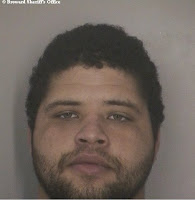 The gunman turns out not to be "white," per se, but probably Latino. His name is Omar Enrique Santa Perez. The company is ranked 389th on the Fortune 500. It is on the list of largest banks in the United States.

The name "Fifth Third" is derived from the names of both of the bank's two predecessor companies: Third National Bank and Fifth National Bank, which merged in 1908.

The history of the location is "haunted."

An ancient Indian mound stood at the present site of Fountain Square when the first white settlers arrived. Foundation Square has been the symbolic and sacred center of Cincinnati since 1871. It was renovated in 1971.


In Marguerite S. Shaffer's edited book, Public Culture: Diversity, Democracy, and Community in the United States (2008), this observation is made:

"With eerie precision, one ancient mound lines up directly underneath the city's Central Parkway; another exactly where early Cincinnatians built the city's first market. The market closed in 1871 when an ornate fountain was the built on the same spot. This urban plaza, known as 'Fountain Square,' has long been regard as the city's spiritual center."

A film clip at Cincinnati's Natural History Museum ends with this voice-over concluding statement: "Ancient monuments brought people together for festivals, rituals, trade, and pleasure, a process we repeat today among newer monuments."

The mythical, folkloric, and sometimes based-in-reality legendary "ancient Indian burial ground" stories resulting in curses, suicides, and murders have resulted in a frequent underlying theme of fiction films and novels.

The Amityville Horror said to be based on a true story, tells of the haunted house being built on a burial ground. It probably wasn't.

Haunted Indian burial grounds have appeared since in Poltergeist II, in Stanley Kubrick’s adaptation of Stephen King’s The Shining, and in countless lesser-known films, novels, and TV shows.
Stephen King’s 1983 novel Pet Sematary is a particularly striking version of this narrative, in part because he describes in great detail the nature and function of the [Micmac] burial ground. ~ "The Suburban Horror of the Indian Burial Ground" by Colin Dickey, The New Republic, October 19, 2016. 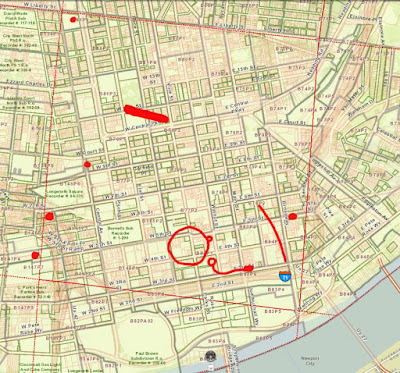 Daniel Drake’s 1815 map of Cincinnati with “Remains of Antient works” highlighted in red. Location of the earthworks recorded by Daniel Drake transposed onto a contemporary Cincinnati map. Source.

Note how the largest of the mounds is centered between 5th and 3rd.

It appears that one of the illustrated Cincinnati earthwork is comparable to the Great Serpent Mound located elsewhere in Ohio. 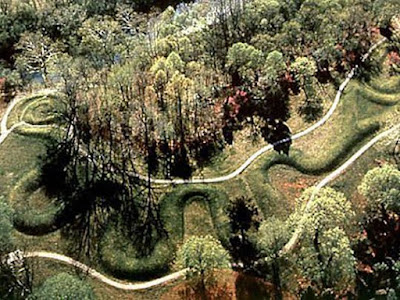 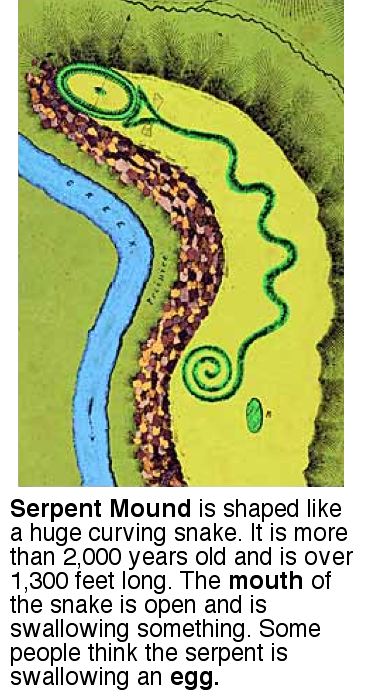 One of the best known mounds in Ohio, located 60 miles from Cincinnati, is the the Great Serpent Mound. It is a 1,348-foot-long, three-foot-high prehistoric effigy mound on a plateau of the Serpent Mound crater along Ohio Brush Creek in Adams County, Ohio.

When investigating the cluster of suicides in Camden, Maine, in the 1990s, I was confounded with the frequent rumor that the local high school had been built on the site of an ancient Native American burial grounds. (Other problems lived there too, due to the link to the book/film Peyton Place.)

September 6, 1966 – Prime Minister Hendrik Verwoerd, the architect of apartheid, is stabbed to death in Cape Town, South Africa during a parliamentary meeting.

September 6, 1972 – Munich massacre: Nine Israeli athletes die (along with a German policeman) at the hands of the Palestinian "Black September" terrorist group after being taken hostage at the Munich Olympic Games. Two other Israeli athletes were slain in the initial attack the previous day. 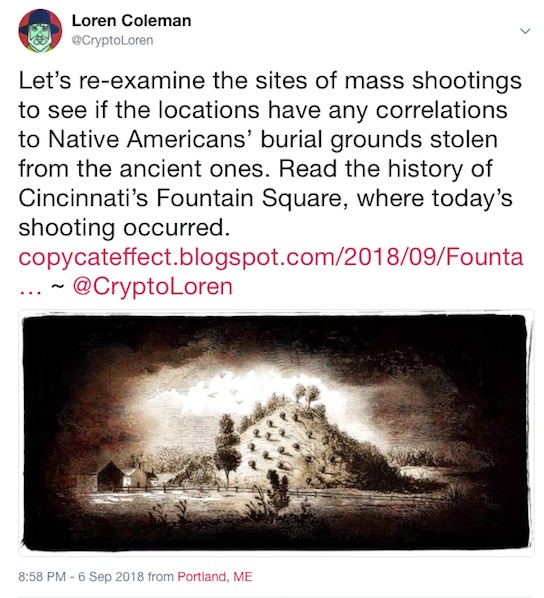 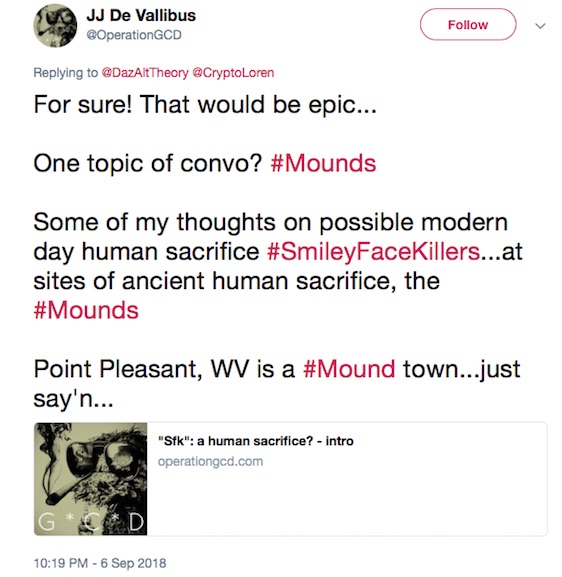 All this amidst the death of Burt Reynolds, who was to play ranch owner George Spahn in the 2019 film "Once Upon a Time in Hollywood." Spahn Ranch, of course, is where the Manson Family plotted their murderous rampage on Cielo Drive ("Heaven") in August 1969. Charles Manson was born in Cincinnati, Ohio (11/12/34). He is connected to #Mounds, via weird, mound city Ashland, Kentucky, also on the Ohio River.