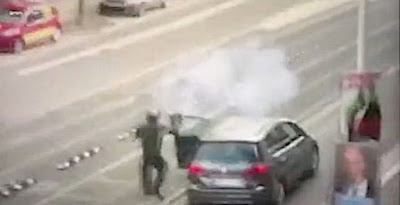 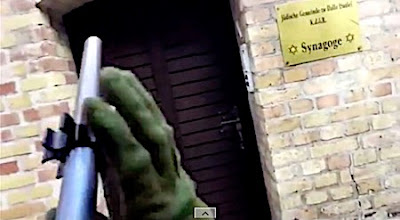 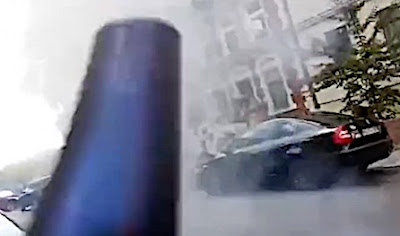 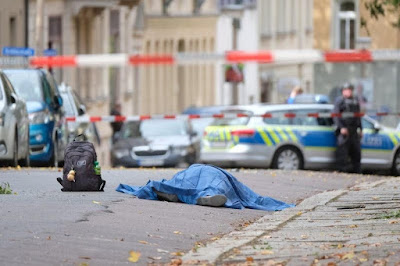 Wednesday, October 9, 2019, was the beginning of Yom Kippur- the Day of Atonement.

At least two people were killed Wednesday in Halle, Germany.

The shootings occured near a synagogue and a kebab shop. At least one suspect, 27-year-old local right-wing man (Stephan B), has been arrested, though police are still investigating whether others were involved in the attack. 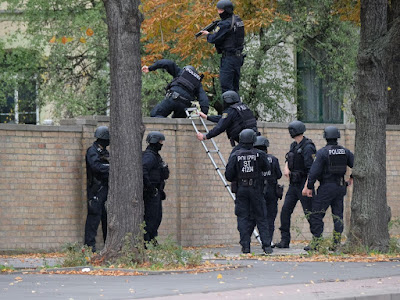 Wednesday is Yom Kippur, one of the holiest days on the Jewish calendar. German media is reporting that at least one gunman posted a video of his assault, recorded with a helmet camera, where he made anti-Semitic comments. But police have not yet confirmed that this was a targeted attack.

The film reportedly showed his abortive attempt to shoot his way into the Halle synagogue, which was full of worshippers marking Yom Kippur, the holiest day in the Jewish calendar. It then allegedly shows him shooting a female passer-by close to Halle’s Jewish cemetery, then driving to a kebab shop where he shoots his second victim.

The filming of Wednesday’s attack echoed another horrific shooting halfway around the world when a far-right white supremacist in March killed 51 people at two mosques in Christchurch, New Zealand and livestreamed much of the attack on Facebook. That massacre drew strong criticism of social media giants for not immediately finding and blocking such a violent video.

The SITE Intelligence Group said the video on livestreaming site Twitch started with the assailant saying “my name is Anon and I think the Holocaust never happened.” He mentioned feminism and “mass immigration” and said that “the root of all these problems is the Jew.”

Here are other highlights of what is known:
At least two people were killed in a shooting near a synagogue and its cemetery, and near a kebab shop in Halle, a city in eastern Germany, according to media reports. A police spokesperson told CNN that the shooting happened on the same street as a synagogue.
The BBC, citing local German media, said shots were fired at the synagogue, but police haven’t confirmed. Witnesses inside the synagogue told German media that the gunman tried to enter the synagogue, but could not force his way inside.
At least one suspect is in custody, according to the New York Times and the Washington Post, both citing local media reports. Earlier on Wednesday, police said two other suspects may have fled in a vehicle south, but it’s not clear right now whether other people were involved.
German media is reporting that at least one of the gunman recorded his attack on a camera mounted on his helmet. On the video, he made anti-Semitic and extremist references, according to reports. German authorities have not yet confirmed the authenticity of the video.
German Interior Minister Horst Seehofer saidthat that police suspect the shooting may have been an anti-Semitic attack.
German federal prosecutors have taken over the case, according to DW. “Whether this case had an anti-Semitic motive still has to be determined,” Carolin Urban, a spokesperson for the federal prosecutors office, said. “We do not exclude any possibility.”
Local police warned residents to stay in their homes, and the city’s railway station was shut down, reports CNN.
Posted by Loren Coleman at 10:03 AM