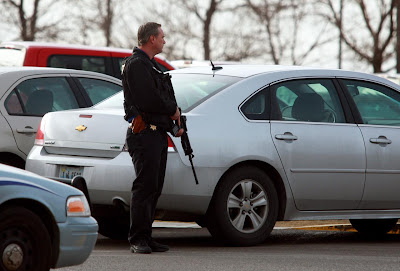 Casper College in Wyoming was the site of the killing of two and a suicide in a morning of violence. An official says three people (two males, one female) are dead, including one faculty member, in what city officials say were attacks with a "sharp edged weapon" at the college and in a nearby neighborhood on the morning (9 am local time) of November 30, 2012, the Casper Star Tribune reported.


President Walt Nolte and city officials say a non-student suspect killed a faculty member in a classroom on the third floor of the Wold Physical Science Center and another victim elsewhere in Casper, and then committed suicide.According to the Star Tribune, Casper Police Chief Chris Walsh said two were dead at the science center and another at a different location in Casper, but that location wasn't identified. Walsh said no suspects are at large and no one else was injured.


Police said the weapon used in the attack appeared to be a "bow and arrow type," according to NBC affiliate KCWY. 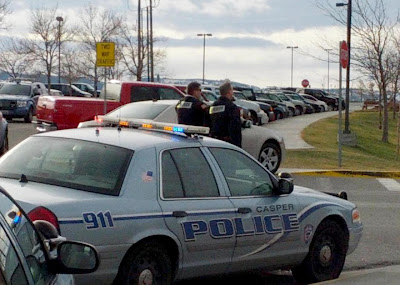 Casper College is a two-year community college in Wyoming's second-largest city. Casper, population 56,000, is about 250 miles northwest of Denver.

The town of Casper's name is due to the violence history locally. Native American attacks increased after the Sand Creek Massacre in Colorado in 1864, bringing more troops to the local Fort Caspar, which was under the command of Lieutenant Colonel William O. Collins. In July 1865, Lieutenant Caspar Collins (the son of Colonel Collins) was killed near the post by a group of Indian warriors. Three months later the garrison was renamed Fort Caspar after Lieutenant Collins. In 1867, the troops were ordered to abandon Fort Caspar in favor of Fort Fetterman downstream on the North Platte along the Bozeman Trail. The reason why the town is named Casper, instead of Caspar honoring the memory of Fort Caspar and Lt. Caspar Collins, is due to a typo that occurred when the town's name was officially registered.
Posted by Loren Coleman at 11:59 AM

There was a near miss at a school in Trenton, NJ yesterday.

Shooting on Morgan State campus (Baltimore) today. A football player was the victim.

An explosive device placed at the back of the Social Security building went off on Friday morning. No injuries reported.

The blast at the Social Security Administration building reminds me of the Oklahoma City bomb attack on the Alfred P. Murrah Federal Building, which housed a number of federal agencies, including the SSA. There has been recent concern in some circles about the SSA's purchasing enormous quantities of hollow point ammo, and I wonder if this might be related. Interestingly, Casa Grande is fifty miles south of Phoenix...

And the foot ball player was a Kansas City Chief, so the stadium he killed himself at was ARROWhead

Sorry Loren, thought he football player you mentioned was the KC Chief I was talking about. Didn't realize there had been 2 football players shot in 2 days.

The attack was of a son against his father, and the father's girlfriend, another instructor at the college. The attacker used a knife on the woman, to kill himself and to finalize his father's death. A high-powered bow-and-arrow was used on the father.

The arrow severely wounded James Krumm, 56, but he managed to wrestle with his son Christopher Krumm, 25, of Vernon, Conn., on Friday. Forty-two-year-old Heidi Arnold was a math instructor at the college. Arnold died of multiple stab wounds.

Please see more on the suicide of the NFL player at Arrowhead: