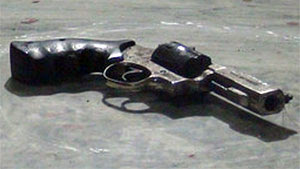 Three are dead in a courthouse shooting in the Philippines. Above is a photograph of the shooter's gun found at the scene.

The official Philippines News Agency (PNA) has reported that a gunman identified as John Pope "went berserk" at the courthouse in the city of Cebu, Philippines, on Tuesday, January 22, 2013.

John Pope, a Canadian national, entered the Palace of Justice at about 8:10 a.m. clad in jogging pants, long white shirt and with a body bag.
He was body-frisked and his bag was inspected.
Pope went directly to MTC Branch 6 as he has a scheduled hearing for malicious mischief case.
According to Prosecutor Noel A. Cellona, Pope greeted him when they met at the stair near the court room.
Cellona noticed nothing unusual in Pope.
Before the start of the hearing, Cellona heard two successive gun bursts.
He saw the complainant Dr. Rene F. Rafols and private prosecutor Juvian Achas lying dead on the ground.
After shooting the victims, Pope went out of the court room and proceeded to MTC Branch 1 opposite the building about 50 meters away.
While walking towards the lobby of MTC Branch 1, Pope met Prosecutor Ma. Theresa C. Casino, the public prosecutor handling his grave threat case.
Casino was point blank shot and was hit in her neck. She was immediately rushed to the hospital and is now in critical condition.
Pope was found dead at the stair of the ground floor with gun shot at the head.
He allegedly shot himself, according to PNP SOCO-7.
Recovered from Pope is a 6-shot 357 revolver with four bullets spent. He was declared dead and his body was brought by the PNP SOCO-7 in Cebu City. (PNA)

Facing a criminal case in the courts, the gunman fatally shot the complainant in the case, who was a doctor, and the doctor's lawyer. The gunman also took his own life. 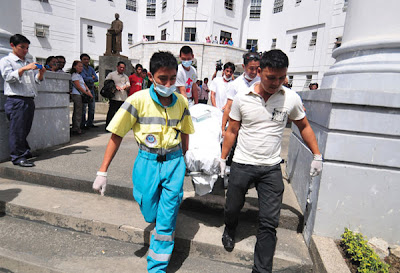 According to the website of the City of Cebu, the name Cebu came from the word “Sebu,” meaning "animal fat."

The Supreme Court has now tightened security measures on all courts nationwide following the incident in the Palace Hall of Justice in Cebu where three people were killed including a lawyer, doctor and the gunman.

Other violence has swept through the Philippines in recent gun violence. Earlier this month, a gunman went from house to house in a town near the capital, Manila, killing at least 9 people. On New Year's Eve, a 7-year-old girl died after being shot in the head amid celebratory gunfire.

The country's Firearms and Explosives Office says there were 1.2 million registered firearms in the Philippines as of last year. Also, the office estimates there were 600,000 unlicensed firearms in circulation nationwide.

The name Pope is from the Latin: papa; from Greek: πάππας (pappas), a child's word for father. The familiar terms "Pop" and "Pops" for "father" are derivatives.
The name of the Cebu courthouse shooter, Canadian John Pope, is one that has a prosaic sound in America, in relationship to the military and spying, in reality and in fiction. This appears to be related to the founding nature of the Pope family in US History.

Some insights into the linkages of a Kentuckian named John Pope (February 1770 – July 12, 1845), U.S. politician, senator for Kentucky (served as President pro tempore of the Senate during the Eleventh Congress), and governor of Arkansas Territory, gives a notion of the Pope power family.

Pope practiced law in Washington, Shelby, and Fayette County, Kentucky. This John Pope was married to the sister-in-law of President John Quincy Adams. He was also the brother of Nathaniel Pope, a prominent figure in early Illinois Territory, and the uncle to both John Pope, Union General in the Civil War and Daniel Pope Cook, another prominent politician in the early history of the state of Illinois.

The Kentucky's John Pope's uncle was John Pope (March 16, 1822 – September 23, 1892), who was a career United States Army officer and Union general in the American Civil War. He had a brief but successful career in the Western Theater, but he is best known for his defeat at the Second Battle of Bull Run (Second Manassas) in the East.

Another John Pope (December 17, 1798 – January 14, 1876) was an officer in the United States Navy during the American Civil War. Born in Sandwich, Massachusetts, Pope was appointed midshipman from Maine, May 30, 1816. Prior to the Civil War, he served in the Mediterranean, West Indian, Brazil, African and East India Squadrons.

From July 1 to October 24, 1861, he was attached to the Gulf Squadron commanding Richmond. He participated in the search for CSS Sumter in the West Indies while on his way to join the Gulf Blockading Squadron, assisted in the blockade of the passes of the Mississippi River and took part in the engagement with Confederate States’ vessels at the Head of Passes October 12, 1861. He died January 14, 1876, in Dorchester, Massachusetts. 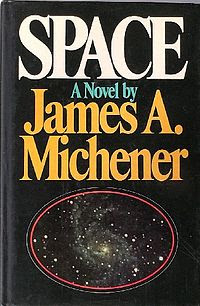 John Pope is a fictional astronaut character in James A. Michener's 1985 novel Space. One of the main figures in the book is this John Pope. Small town Pope is swept from naval warfare in the Pacific, through air combat in the Korean War and his test pilot life at "Pax River," to his astronaut selection and training.

Another character in this book, according to this summary, is "a highly intelligent but cynical cult leader calling himself Leopold Strabismus who exploits first the UFO craze and then an anti-scientific creationist agenda to increase his fortune...The novel closes with Pope retired from NASA and a respected professor of astronomy, his wife Penny in the Senate, and [aeronautical engineer Stanley] Mott consulting on 'Grand Tour' unmanned missions to the outer solar system. The two men finally attending a NASA workshop discussing the possibility of extraterrestrial life, at which Strabismus privately drops the creationist/fundamentalist persona he has adopted and joins in the intellectual debate on the inevitability of life elsewhere in the Universe." 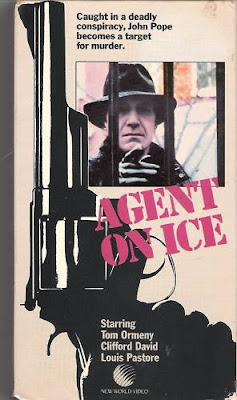 Also in 1985, in the fiction movie Agent On Ice, the lead character, ex-agent John Pope (Tom Ormeny) was unwittingly involved in a deadly conspiracy, and in the film, the Mafia, the police, and the C.I.A. all want him.

The name "Pope" is one that some remember from CIA flights over 50 years ago in Asia. 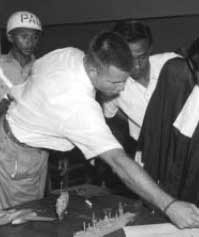 Allen Pope, 1960, Indonesia, shot down flying a B-26 bomber in Indonesia in May 1958, flying for the CIA in support of Indonesian rebels and against the Government of Indonesia. Sentenced to death, the US brokered his release, but he spent four years in an Indonesian jail. Source.

eugene (http://www.blogger.com/profile/06686191609226945299) says:
Your latest piece 'Pope Shoot Three" is rife with the three Supernals or the Great Father/Mothers. The mention of Cebu as animal fat is directly related to "BAPHOMETIS" which is immersion in wisdom. The sign of which is to pour oil (distillation of plant or animal) onto the head of the King. The oil is sign that all that went before is made into one thing, post mortem of course, and functions as fuel for the torch on the head of the Goat .. jumping to its supreme height.

Interesting pope means papa or father. In Las Vegas yesterday a police officer murdered his wife, child and then set his house on fire, apparently ready to gun down anyone who entered. However as police approached he took his own life.