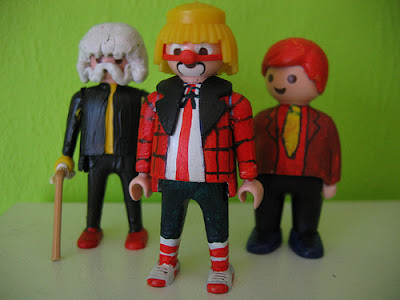 In the Dutch city of Volendam three clowns have beaten up a boy at the local clown festivities (which involves over 200 clowns) over weekend. 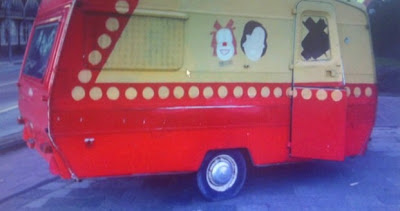 The three phantom clowns also damaged the Bassie & Adriaan caravan (above, in the photograph).

Volendam (Vollendam means "filled dam") is a town in North Holland in the Netherlands, in the municipality of Edam-Volendam (about 23,000 people). The Netherlands is Dutch (Nederland), meaning the "Low Countries" or "Low Country." The name "Holland" is a province of Netherlands; the names Holland and Netherlands are not interchangeable. 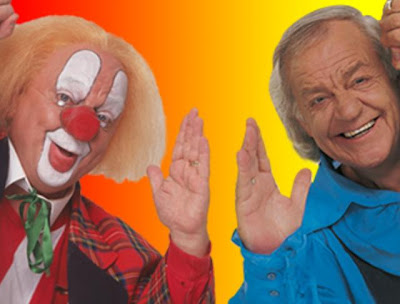 Bassie & Adriaan were a Dutch circus duo who starred in their own television series. Bassie is a ginger-haired red-nosed clown who wears a red tartan-jacket and green trousers; he's fond of cream-cakes, and calls himself "stupid, but not smart." His circus friend was named Adriaan.

You will recall there have been recent 2012-2013 stories of attacks by Leprechauns in the USA, Oompa Loompas in the UK, and Smurfs bashing a man in Australia.

Thanks to Theo Paijmans for the news tip.
Posted by Loren Coleman at 5:56 PM

Horrific Juggalo murders in Joliet, IL over the weekend.

megalith AKA charles AKA Grumpy (not the Disney version) said...

as i recall there was a netqwork TV show awhile back which featured a Flash Mob of costumed clowns to cover some nefarious deed.
so the concept itself is not original but still fascinating.
keep up the great work.