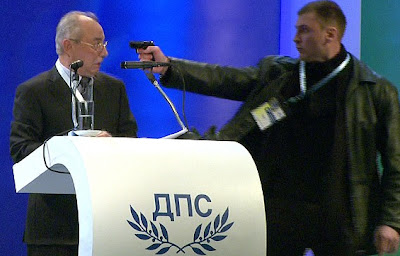 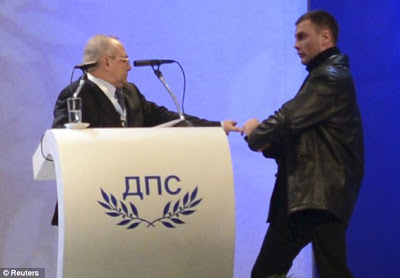 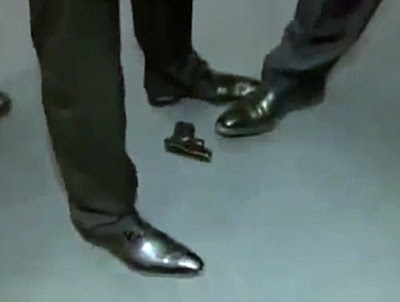 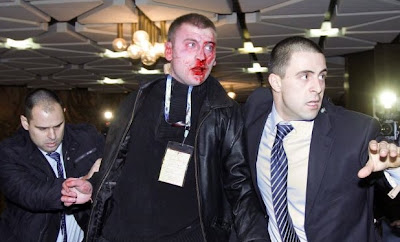 Police in Bulgaria detained a man after he pointed a gun at an ethnic Turkish party leader as he was delivering a speech in the capital. No shots were fired.
The video from the Saturday event in Sofia shows the man climbing the podium where Ahmed Dogan, the leader of the Movement for Rights and Freedoms, was speaking. The potential assassin pointed the gun at Dogan's face.

Dogan struck the man before other delegates wrestled the assailant to the ground, and police took him away.

Here is a short version of the video, at an angle where, at the end, you can see an elderly man jump on the stage with a cane.
In 2007, Turkish journalist Hrant Dink was assassinated in front of his newspaper's office by 17-year-old Turkish ultra-nationalist Ogün Samast.

In this five minute version, from a distance, other interactions can be viewed. 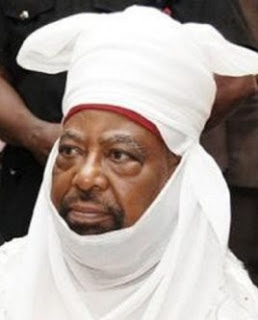 Meanwhile, also on January 19, 2013, the monarch and the Emir of Kano, Alhaji Ado Bayero, had was attacked by unknown gunmen who opened fire on some of the vehicles in his convoy, including his limousine. Men on motorbike and in a car attacked the convoy of the Emir of Kano, Ado Bayero, at Masalaci Murtala area of Kano, Nigeria. The Emir was returning in the afternoon from a ceremony at a mosque when the men opened fire on his convoy. 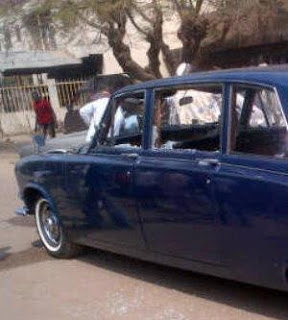 The Emir is one of Nigeria's most senior Islamic leaders.

Recently, two members of the state’s House of Assembly were killed by unknown gunmen in Kano.

January 19th is the birthday of Edgar Allan Poe (in 1809), Confederate Heroes Day (in Texas), and Robert E. Lee Day (in Florida on January 19th) and (in Alabama, Arkansas, Mississippi and Georgia on or around January 19th).
Posted by Loren Coleman at 9:48 PM

You can clearly see the would be Turkish assassin pull the trigger of the pocket pistol without effect. At that point his intended victim pushes the gun away and the gunman attempts to clear the pistol to no avail.

"Sofia" is perhaps the element that is important here.

The gun was a gas pistol. The "assassin" was an ethnic Turk.