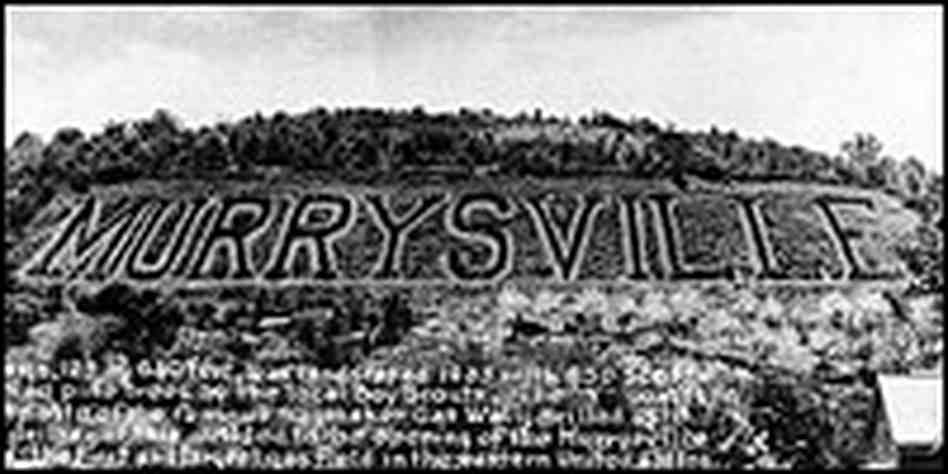 Mass stabbings hit two unique locations on April 9th. One is known for formerly having "the world's largest arboreal sign" and "the largest commercial gas well in the world." The other is still famed for being "the longest street in the world."

While mass shootings have been common in North America, mass stabbing events are more frequent in China & Japan (see here, here, here, and here).  A well-publicized American incident did occur in Texas in 2013. 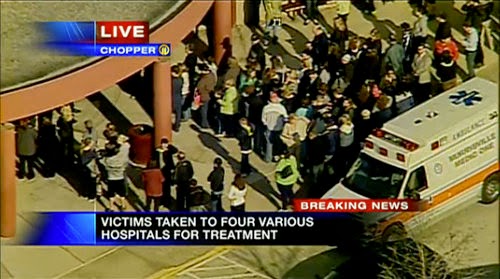 Seven teens and one adult are being treated after a stabbing incident at a Pennsylvania high school and some of the injuries are "clearly life threatening," according to a doctor at Forbes Regional Hospital. The teens had stab wounds to their torsos, abdomen, chest and back areas, he said. 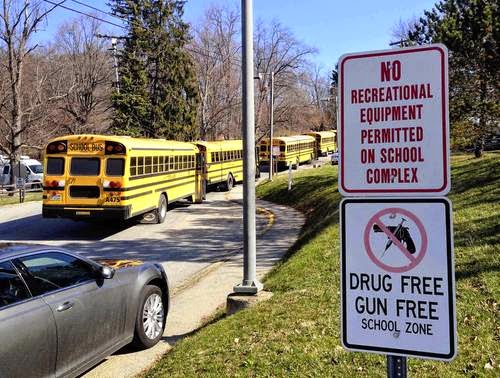 The stabbings occurred at the Franklin Regional Senior High School to youth with ages  ranging from 14 to 17.


A Disney Dreamworks movie, I Am Number Four, was filmed at the school in 2010. It was based on a book with the same name. The sequel to the book was called The Power of Six, writes the Newspaceman. 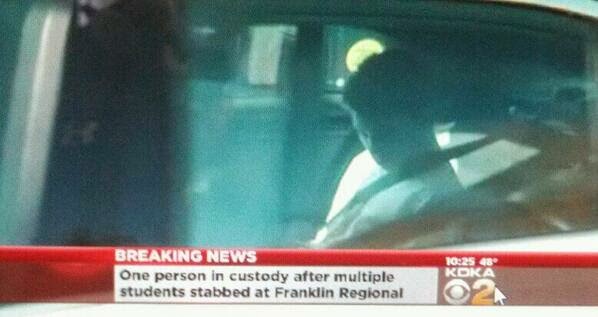 The suspect, a male student, was in custody after the stabbings at the school in Murrysville, about 15 miles east of downtown Pittsburgh. Update: The suspect in the Pennsylvania school stabbings is identified in court documents as Alex Hribal, 16. He has been charged as an adult. 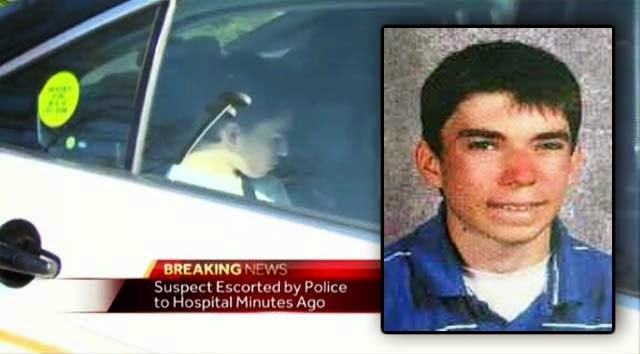 Hribal's Facebook page is adorned with a picture of Kurt Cobain, who committed suicide nearly exactly 20 years ago. The social media profile includes a reference to Hitler. He allegedly lived on Sunflower Court in Murrysville, Pennsylvania.

The suspect was described as wielding two knives simultaneously during the attack.

The injured were admitted to Forbes Regional Hospital in Monroeville, Pennsylvania, with stab wounds. 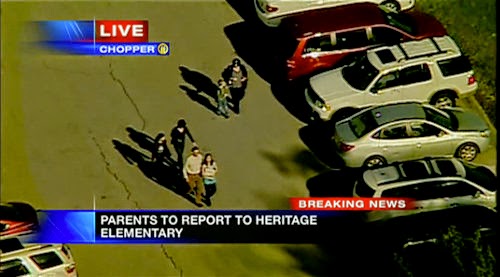 "These are all very serious injuries," hospital spokesman Jesse Miller said in a telephone interview.

The first 911 call was received at 7:13 a.m. EDT. The attacks took place in several classrooms and hallways as the school day began. Zak Amsler, a 17-year-old junior at the school, said the attack occurred just before his first class was scheduled to begin. 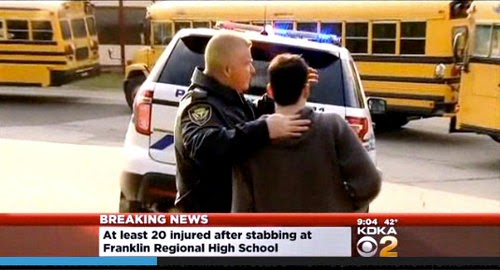 "I saw a girl with blood running out of her sleeve," Amsler said as he waited to pick up his younger sister, a student at the nearby middle school. "It was pretty mind-blowing."

Stevens, the county official, noted that the scene had been contained. "The students that are here are safe," he told reporters.

The Haymaker Gas Well in Murrysville was the nation's first commercial natural gas well. For some time, it remained the largest commercial gas well in the world.
Since 1933, Murrysville has had a "tree sign" spelling out the word "Murrysville". The trees were landscaped to grow and form the letters by local Boy Scouts. The sign is situated on a large hill as one enters the Municipality from the Murrysville–Monroeville border, near U.S. Route 22. In 1947, the sign was featured in "Ripley's Believe It Or Not" as the world's largest arboreal sign. (It is no longer the world's largest, or even the largest in the country; "Luecke", near San Antonio, Texas, is much larger.) The "Y" in the Murrysville sign points to the Haymaker Gas Well. Source. 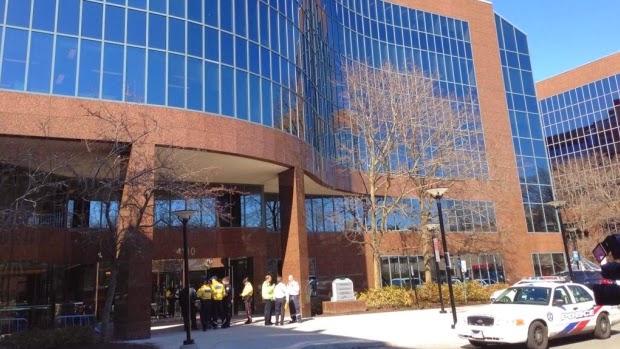 Just after 9:30 am ET also on Wednesday, April 9, 2014, Toronto police responded to multiple 911 calls from an office building on Yonge Street near York Mills Ave. One man, apparently Asian, (shown here) was placed in custody after Toronto police say at least four people were stabbed (by scissors) at the building in the northern part of the city.

Police say the attack happened on the fifth floor of an office complex at 4110 Yonge St., near York Mills Avenue.

CBC News has confirmed that four people were taken to hospital with stab wounds.

A man and a woman in their 30s are among the people who were stabbed. The two suffered multiple, serious stab wounds, according to police, and are in critical condition in hospital. Two other males whose ages are not known were transported with serious wounds to a trauma centre.


Yonge Street (pronounced "young street") is a major arterial route connecting the shores of Lake Ontario in Toronto to Lake Simcoe, a gateway to the Upper Great Lakes. It was formerly listed in the Guinness Book of Records as the longest street in the world at 1,896 km (1,178 mi). The construction of Yonge Street is designated an Event of National Historic Significance in Canada. Yonge Street was fundamental in the original planning and settlement of western Upper Canada in the 1790s, informing the basis of the concession roads in Ontario today. Long the southernmost leg of Highway 11, linking the capital with northern Ontario, Yonge Street has been referred to as "Main Street Ontario". A large part of the route follows an ancient well-established Aboriginal trail that linked the Lake Ontario waterfront to northern parts of the region. It was also the site of Canada's first subway line. Source.

Posted by Loren Coleman at 1:39 PM

Hiya Loren, thanks for the comment, appreciated. Have linked this "incident" to Peaches, Crowley, Geldof.

It's all about the letter Y.

"The creation myths of the world are acroamatic cryptograms..."

The Letter Y is the archetype for the Savior God mythologies..."

There's certainly an excess of threes in that Kansas City sniper story. "Three drivers have been wounded by gunfire as they drove along area highways, many in an area called the Three Trails Crossing, where three interstate highways intersect. ... So far three 3 people have been shot including that Blue Springs man, who was eastbound on 435 near 470 when three bullets struck his car."

According to Wikipedia, "The name 'Three Trails Crossing' refers to the Santa Fe, Oregon and California Trails that cross there." In this case, these three historic roads don't merely intersect but all overlap one another -- but it seems to be charged with the same symbolic resonances as triple intersections.

Places where three roads meet are symbolically related to crossroads, and they appear to have been represented by the symbols Y and X respectively even before there was an alphabet. Oedipus killed his father at a place where three roads met, and ghosts are often said to congregate at a fork in the road. I suspect there is also a relationship to those supernaturally potent places where two rivers run together to form a third.

Cory,
Thanks for pointing out the cluster of 3's! I was looking at names and that didn't register. I did take notice of Leawood and Lee's Summit, though.


And do we have a Ruby Ridge/Waco situation building up at the Bundy Ranch in Nevada?

Hold on to your butts?