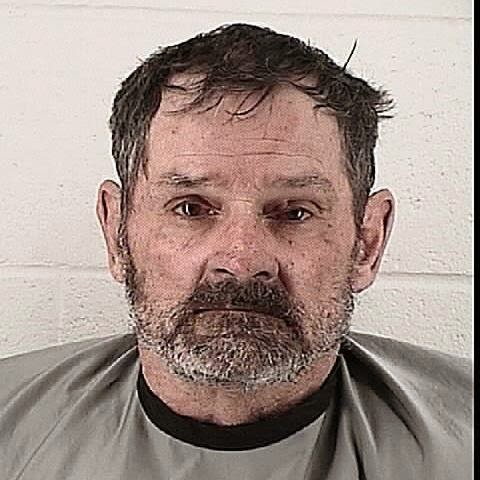 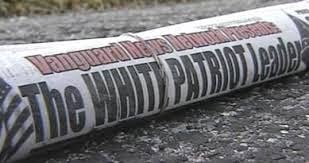 As I detailed after the The Dark Knight Rises deaths in Aurora, Colorado, a new red dawn appeared to be in evidence.

The shootings at the Jewish-related sites on Palm Sunday, April 13, 2014, resulted in three deaths. 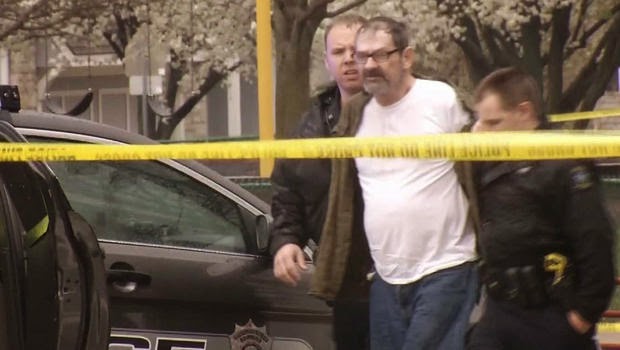 Authorities announced Sunday night that in custody was none other than Frazier Glenn Cross, Jr., 73, who is suspected of fatally shooting a 14-year-old Methodist Eagle Scout and his grandfather in the parking lot at the Jewish Community Center of Greater Kansas City campus in Overland Park then gunning down a woman at Village Shalom, a retirement community. 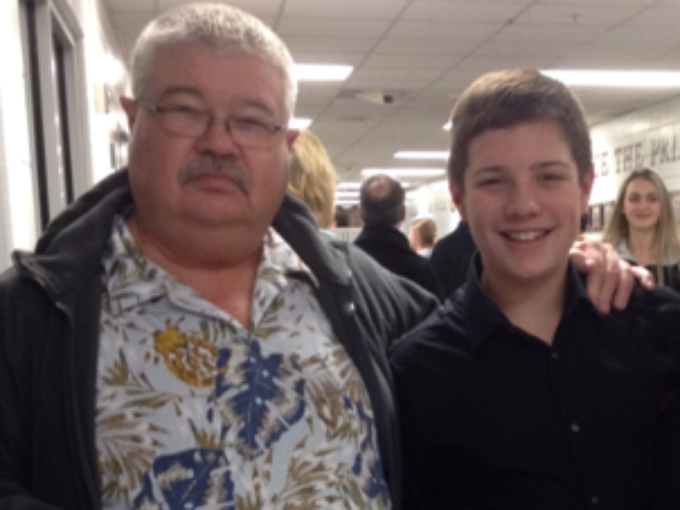 The two identified victims are Dr. William Lewis Corporon and his 14-year-old grandson, Reat Griffin Underwood, both members of the United Methodist Church of the Resurrection in Leawood. 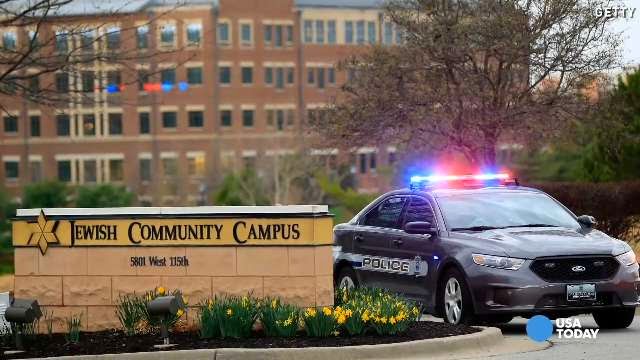 The population of the town is about 7500, and it lies in Lawrence County. Between 1911 and 1920, the virulently anti-Catholic newspaper The Menace was published in Aurora by W. F. Phelps and Earl McClure. It achieved a national circulation of over one million, according to the March 1932 issue of American Mercury. 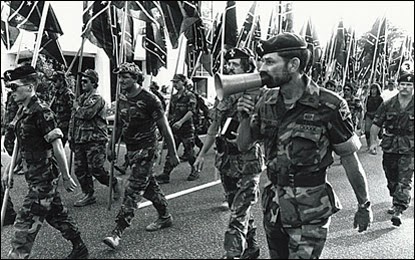 Miller has a long track record of racist and anti-Semitic activities.

Frazier Glenn Miller, Jr. (b. Nov 23, 1940),...is the former leader of the defunct North Carolina-based White Patriot Party (formerly known as the Carolina Knights of the Ku Klux Klan). Convicted of criminal charges related to weapons and violation of an injunction against paramilitary activity, he is a perennial candidate for public office. He is an advocate of white nationalism, white separatism, and anti-Semitic theories; and a critic of homosexuality and Third World immigration into historically White nations.
As a member of the racist hate group, “The Order,” which advocated violence against Jews and African-Americans, Miller was involved in the assassination of Denver, Colorado radio talk show host, Alan Berg, in 1984:
"Ten members of The Order were tried and convicted under Racketeer Influenced and Corrupt Organizations Act (RICO) statutes, and with the help of the testimony of Frazier Glenn Miller, Jr., who testified against Order members in order to have his own sentence reduced.”
...
In 1980 Miller founded the White Patriot Party, which developed from the Carolina Knights of the Ku Klux Klan, a local chapter. It was a paramilitary organization with an ideology influenced by the Christian Identity theology. Miller was the leader and principal spokesman for the organization until his arrest in 1987, after which the organization soon dissolved.
After the Southern Poverty Law Center surreptitiously accessed the WPP computer systems, it presented evidence in court indicating the WPP leadership was planning the assassination of SPLC leader Morris Dees. The court issued an injunction barring the WPP, and Miller specifically, from engaging in paramilitary activity. The WPP was avowedly pro-Apartheid, and openly advocated the establishment of an all-White ethnostate in the territory of the American South.
During his time as leader of the WPP, Miller unsuccessfully sought both the Democratic Party's 1984 nomination for Governor of North Carolina, and the 1986 Republican Party's nomination for a seat in the United States Senate.
After going underground, Miller was arrested on April 30, 1987, on numerous Federal criminal charges in the company of three other men (Tony Wydra, Robert "Jack" Jackson, and Douglas Sheets), who were also taken into Federal custody. After his arrest, Miller agreed to testify against several other defendants in a major Federal sedition trial in Arkansas. He served three years (1987-1990) in Federal prison, following his conviction for weapons violations, as well as for violating the injunction proscribing him from engaging in paramilitary activities. 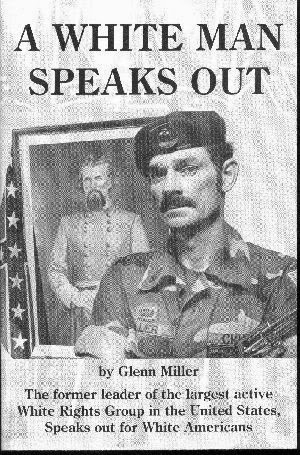 After his release from prison, Miller wrote an autobiography, A White Man Speaks Out, which was privately published in 1999. By 2002 he had moved to Aurora, Missouri. Miller has since become affiliated with the Vanguard News Network of Alex Linder, which is an anti-Semitic, white nationalist website....Miller's [was] interviewed on The Alan Colmes Show and by phone on The Howard Stern Show. Source.

Miller was involved in the rally and leadership which resulted in the The Greensboro massacre, which occurred on November 3, 1979 in Greensboro, North Carolina, United States. Five protest marchers were shot and killed, allegedly, by members of either Miller's group, the American Nazi Party, and/or the KKK. While eyewitnesses stated it was a klansman who fired the first shot, Frazier Glenn Miller said the first shots were fired from a handgun by an anti-Klan demonstrator.

But what is the reality behind this man? As Michael Hoffman notes elsewhere and summarizes in the comments section, "Frazier Glenn Miller, the accused shooter, is a former informant for the Federal government having testified for the prosecution in a landmark 1989 'sedition' trial of militiamen, Klansmen and 'Order' members at Ft. Smith, Arkansas." 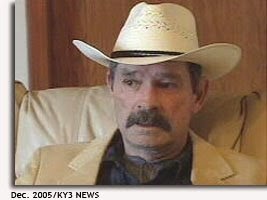 After Miller moved to Aurora in 2002, he began publishing his paper, The White Patriot Leader. It included articles by Miller, and former KKK leader David Duke, as well as a recommended reading list which included Mein Kampf, and The Turner Diaries, a racist novel that supposedly inspired Oklahoma City bomber Timothy McVeigh.

Frazier Glenn Miller, who once went to prison for refusing to shut down his paramilitary White Patriot Party, wrote in a blog post that he doesn't know why his son shot the "white man" who had pulled over to help him after a traffic accident.
But that didn't stop Miller from naming a scapegoat: the Springfield, Mo., Police Department.
The shooting was part of a bizarre string of events on March 28 that began with a car accident and culminated in the death of Miller's son, Jesse. Early that afternoon, an SUV driven by Jesse Miller, 30, hit a pick-up truck in Marionville, Mo. When Joseph M. Rich, 55, stopped to offer assistance, Jesse Miller killed him with a shotgun he had in his vehicle. Soon afterward, a Marionville, Mo., police officer arrived and ordered Miller to put down his weapon. Miller responded by shooting the officer, who then shot Miller dead. The officer, Andy Clark, suffered a non-life threatening shoulder wound. Source.

In 2014, it now appears that Glenn Miller of Aurora, Missouri, visited his violent history upon Overland Park, Kansas.

April is turning into the kind of month we thought it might be.

As I wrote last summer, this 94-degree West line of longitude where the Overland Park shooting took place and where Miller lived (Aurora, MO) is a very strange area. Before this tragedy occurred, I had been thinking about the Kansas City area and, knowing where it lay on the Earth, wondering if something were to happen.

Frazier Glenn Miller, the accused shooter, is a former informant for the Federal government having testified for the prosecution in a landmark 1989 “sedition" trial of militiamen, Klansmen and “Order” members at Ft. Smith, Arkansas.

The comment from Hoffman above makes Miller out to be a potential mole; however, as the original post states, he turned State's evidence for a plea deal. Is there evidence to present that Miller was an informant prior to the plea deal?

Here's some twilight language for you:

Miller stands in front of a portrait of Nathan Bedford Forrest on the cover of his book.

Michael Hoffman's first issue of his Revisionist History Newsletter also has a portrait of Forrest, along with a hagiography of the Confederate General, and is entitled "Southern Superman."

Nazi Swastika, the turning of the Black Sun in the Box = Aurora's Spinning Wheel

The play is 'To Kill a Mockingbird', i.e. 'Hunger Games: Mockingjay'

Odinist Nazi kills gentiles in the Killing Joke of it all

On March 12, 2014, a man named Kelly Vern Mark Swoboda was shot in a duell with a police-officer in the conservative/orthodox Jewish quarter of Portland/Hillsboro, Oregon. In the same neighbourhood is the large conservative Jewish megasynagogue, Neveh Shalom.

His first middle name, Vern, resonates with Vernon, the birth-name of David Koresh, and also with vern-/vernal, as in the vernal equinox that came soon after the shooting on March 20. His last name, Swoboda, resonates with the name of the far-right Svoboda party that has recently become powerful in Ukraine. Svoboda means "freedom" in Russian. The insignia of Svoboda is a Wolfsangel, i.e. the wolf-lure, which closely resembles the yew-rune in Futhark (called Eihwaz). The shooter at Ford Hood, Ivan Lopez, can be considered to be named Wolfsangel, since his first name, taken as a male form of Yvonne, similar to Yves, means "yew" or "archer" in Old Frankish. His last name, Lopez, means "of the wolf". Thus, his name means "yew-wolf", or, symbolically, "Wolfsangel".