A significant Hockomock Swamp/Bridgewater Triangle structure has vanished, apparently due to arson.

The Assonet Band of the Wampanoag Indian Cultural Center building in the Freetown State Forest was destroyed by fire Saturday morning, June 27, 2009.

It was located on Ledge Road on the 227-acre Watuppa Reservation in the forest, according to a statement by the Freetown Fire Department.

Police said the Freetown Communications Center received calls at 7:30 a.m. for “smoke in the area.”

When firefighters arrived, they found the 30-by-25-foot single-story wooden structure on fully involved in fire.

Investigators from the police and fire departments and the State Fire Marshal’s Office are looking into the cause of the fire.

Ken Alves, chief of the Assonet Band of thw Wampanoag nation, said he suspected arson, citing many other acts of vandalism that have occurred at the Cultural Center and a nearby pump house. The buildings have been broken into, shot with paintballs and covered with graffiti.

"The part of the forest that we're located on, we've been besieged by vandalism for quite awhile," he said.

The Cultural Center, which was built in the 1990s, was used as a gathering place for meetings, celebrations and teaching, Alves said.

The Center sat in the midst of the Freetown forest in the Hockomock Swamp/Bridgewater Triangle.

On Saturday, July 4th, 2009, the radio show "Spooky Southcoast" will broadcast a program on this new fire and any developments this week from the arson investigation. It is aired live from 10 PM to Midnight, Eastern, from the midst of the Bridgewater Triangle.

Let me share the beginning of the passage defining the "Bridgewater Triangle" from Wikipedia, and following it with some corrections about this phrase:

The Bridgewater Triangle is an area of about 200 square miles (520 km2) within southeastern Massachusetts in the United States. Since colonial times the area has been a site of alleged paranormal phenomena, ranging from UFO and "black helicopter" sightings (including many with multiple points of corroboration including police and a local news team), to poltergeists and orbs, balls of fire and other spectral phenomena, various "Bigfoot" sightings, giant snakes and 'thunderbirds', as well as the mutilation of cattle and other livestock.

Although known for centuries as an area of unusual and unexplained activity, the specific boundaries of the Bridgewater Triangle were first defined by paranormal researcher Loren Coleman in his book Mysterious America. The Triangle encompasses the towns of Abington, Rehoboth and Freetown at the points of the triangle, and Bridgewater, West Bridgewater, Middleboro, Dighton, Berkley, Raynham, Easton, Lakeville, and Taunton inside the triangle.

Central to the area is the mysterious and largely untouched Hockomock Swamp, which means "the place where spirits dwell", and which was called "The Devil's Swamp" by early settlers. The Triangle also contains several Indian burial grounds, as well as significant sites used by both natives and colonists during King Philip's War, which is said by some to be the source of several curses on the nearby land. 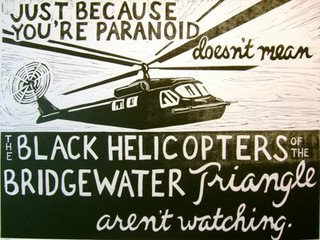 The Wikipedia author of this entry gives other info, and then summarizes what I and others have written on the Freetown State Forest:

Another area of unusual activity within the Bridgewater Triangle is the Freetown-Fall River State Forest. The forest land and that forming the town of Freetown was purchased from the Wampanoag Tribe in 1659, and many Native Americans have claimed that the odd and evil events which transpired over the preceding 350 years are the result of a tribal curse. For decades the Freetown State Forest has reportedly been the site of various cult activity including animal sacrifice, ritualistic murders committed by admitted Satanists, as well as a number of gangland murders and a high number of suicides.

Among the recorded homicides are over a dozen confirmed murders in the forest over 1978 to 1988, as well as on-going police investigations in discovered mutilated remains of cattle and goats. Another gruesome discovery by Freetown police, following the report by the victim of a previous sexual assault at the site, was an underground bunker otherwise hidden from view. Upon investigation police found a number of strange objects, including small chairs with belts or restraints, seemingly made for children. 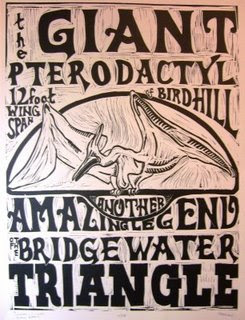 Actually, I coined the phrase "Bridgewater Triangle" in the 1970s, using it in correspondence with other researchers, in lectures, and with the media during my investigations there. I first used it in print in an article for the April 1980 issue of Boston Magazine entitled “The Bridgewater Triangle.” I then expanded that article into a chapter in the first Faber and Faber edition of Mysterious America in 1983, and then updated that chapter for the Paraview publication of 2001 and 2006's Simon and Schuster edition of Mysterious America. 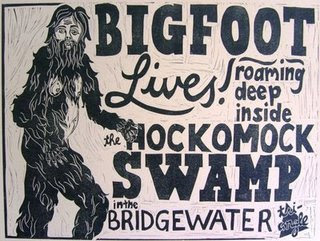 The cultural wave of the Bridgewater Triangle can be seen sprinkled above in the three distinctive examples of old-fashioned poster art from Mark Phelan, and other creations below.

Map of the Bridgewater Triangle created for a Boston Globe article about the area.
Posted by Loren Coleman at 9:22 PM

Nice and informative article, Lauren, and great map. I will make good use of it my next New England vacation to see some paranormal sites.
I just feel bad for the owners of their center and hope the cops get the arsonists very soon!

The name 'Dighton' caught my eye. Are you familiar with Dighton Rock?

Oh, yes, Ostrich, the Dighton Rock and I go way back.

I remember being able to go inside the enclosure to appear next to the Rock for a television report on the area over 25 years ago. The structure and the lore linked to the Rock figures in my first article/chapter discussions on the Triangle. It has been a location for various peoples traveling through the Hockomock Swamp on which to leave their "mark" for a long, long time.

Oh, and have you heard the latest? Moose are in the swamp now. It was in the newspaper a few weeks ago.

in Whitman-Hanson which I believe is in the triangle, there is the Plymouth Country Hospital. It was a TB hospital which burnt down, but the remains are supposedly VERY haunted. The place is patrol by cops regularly because it is still a crime scene. I snuck in once this summer and it is the scariest place I have ever seen. There are ovens where they used to burn bodies and everything.

I lived for many years in Raynham (the Bulls Eye) of the Triangle and never knew of the curse or the strange happenings until after midnight one starless eve, when I encountered and spoke with the 'Bridgewater Bigfoot'.
In my almost 70 years, it was the strangest creatue I have seen. I reported the story on Hubpages. You can read it by clicking the link.