An 88-year-old white supremacist, 9/11 "Truther" and Holocaust denier or revisionist opened fire in Washington D.C.’s Holocaust Museum on June 10, 2009, wounding at least one before being shot in the head by security officers. The gunman gravely wounded a security guard before two other officers returned fire. The assailant, James W. von Brunn, and his victim were both hospitalized. Late Wednesday afternoon, the guard, identified as 39-year-old Stephen T. Johns of Temple Hills, Maryland, died.

Intriguingly, one of the first people interviewed outside the Holocaust Museum, a man with his family who had been inside during the shooting, was shown on full screen by Fox News wearing a tee-shirt emblazoned with the picture of and words The Twilight Zone Tower of Terror.

The interview, entitled ""Felt Very Secure," was by reporter Steve Centanni of Todd Newman and his wife, Roberta, plus their two daughters. The Newmans were identified as being from Sparks, Nevada.

The Twilight Zone Tower of Terror is a drop tower thrill ride at Walt Disney amusement parks and is based upon the television show The Twilight Zone. The original version of the attraction opened at Disney's Hollywood Studios in July 1994, with the California Adventure version opening nearly ten years later, in May 2004.

How subtle is that regarding an overt "twilight language" message of "terror," with an illusion back to 9/11 and more? (Credit is to be given to MAH, S., T. and M. for bringing this to my attention.)

James Wenneker von Brunn reportedly was an 88-year-old resident of Maryland. He once lived in Lebanon, New Hampshire.

"Eighty-eight is used as code among Neo-Nazis to identify each other. H is the 8th letter of the alphabet, so 88 is taken to stand for HH which in turn means Heil Hitler," says Wikipedia.

James W. von Brunn, who was charged and convicted in 1981 for running towards the boardroom of Washington’s Federal Reserve building with a shotgun, entered the Holocaust Museum just before 1:00 pm Eastern and opened fire “indiscriminately” with a long rifle.

A guard was immediately hit, before two other security officers at the heavily guarded museum, less than a mile from the White House, hit von Brunn in the head with return fire.

D.C. Police Chief Kathy Lanier said the gunman appeared to have acted alone. He was "engaged by security guards immediately after entering the door" with a rifle, she said.

The episode unfolded inside the museum, which maintains a heavy security presence, with guards positioned inside and out. All visitors are required to pass through metal detectors at the entrance, and bags are screened.

It was not immediately known whether the gunman made it through the detectors before opening fire.

Anne Frank and The Date

Von Brunn reportedly has claimed that the book The Diary of Anne Frank, about a teenage girl's experiences under Nazi rule, was a hoax. The shooting occurred two days before what would have been Anne Frank's 80th birthday. Other significance events linked to this date include: June 10, 1940 - Norway surrenders to the Nazis; Italy declares war on Britain and France; June 10, 1942 - Nazis liquidate Lidice in reprisal for Heydrich's assassination; June 10, 1944 - Nazis liquidate the town of Oradour-sur-Glane in France. Women and children are burned alive in a church in Oradour-sur-Glane and the men are machine-gunned. The incident has been fictionally transported to additional locations in various movies (e.g. most recently, The Reader) about Nazis (and about the British during the Revolutionary War, The Patriot).

It has been pointed out, by sites as diverse as RevisionistHistory.org and Daily Kos, that on this day at the Holocaust Museum "African-American Attorney General Eric Holder was scheduled to visit the museum to hear a reading of the script of Anne and Emmett, a play about Anne Frank and Emmet Till." Furthermore, the author of this Holocaust Museum play, Janet Langhart Cohen, the African-American wife of former Secretary of Defense, former Maine Senator William Cohen, were also in attendence. (The guard killed is African-American.)

The premiere of Langhart's one-act play imagines a conversation between two teens, Nazi victim Anne Frank and Jim Crow victim Emmett Till. Her play was presented in honor of the eightieth anniversary of Anne Frank's birth.

It is also to be noted that the date of June 11, 2001 is the day on which Timothy James McVeigh was executed for his role in the Oklahoma City bombing of the Alfred P. Murrah Building. 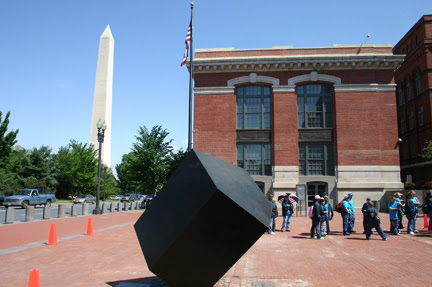 The Holocaust Museum was established almost literally in the shadow of the obelisk of the Washington Monument.

The museum, across the street from the National Mall, and within sight of the Washington Monument, was closed for the day after the shooting. Nearby streets were cordoned off by police.

At the White House, press secretary Robert Gibbs said he informed President Barack Obama of the events and said the chief executive was "obviously saddened by what has happened."

The museum houses exhibits and records relating to the Holocaust more than a half century ago in which more than six million Jews were killed by the Nazis.

Mark Lippert of LaSalle, Illinois, who was in the museum, said he heard several loud pops and saw several schoolchildren running toward him, three with horrified looks on their faces.

Linda Elston, who was visiting the museum from Nevada City, California, said she was on the lower level watching a film when she and others were told to evacuate.

"It was totally full of people," Elston said. "It took us a while to get out."

She said she didn't hear any shots and didn't immediately know why there was an evacuation. The experience left her feeling "a little anxious," she said.

The Times of London noted:

Von Brunn, who claims on his own website to have been a decorated PT-boat captain and lieutenant in the US Navy during World War II, has written a book entitled Kill the Best Gentiles! According to its preface, its purpose it “to present WHITE YOUTH” with factual information to explain that an “age old CONSPIRACY does exist to destroy Western Civilisation.”

Von Brunn also has a Wikipedia user profile in which he champions the virtues of Western culture and the practice of eugenics. In another article he claims that Holocaust history is destroying Western civilization.

He is clearly a Holocaust denier – a belief decried by Mr Obama during his speech to the Muslim world in Cairo last week. Von Brunn bemoans that “Jews control all important sources of information”, and claims that there is a Jewish conspiracy to destroy the white gene pool. He also wrote: “America is a Third-World racial garbage-dump – stupid, ignorant, dead broke, and terminal. Whites LOVE their Enemies. Prepare to die, Whitey.” One of heroes he cites is World War II Real Admiral John Crommelin, a notorious anti-Semite who later ran for governor of Alabama.

In 1981, von Brunn entered the Federal Reserve in Washington with a shotgun to make a citizens arrest, he later said, to protest about high interest rates. He was sentenced to 11 years in jail.

On his website, he claims he was convicted by a “Negro jury, Jew/Negro attorneys, and sentenced to prison for eleven years by a Jew judge. A Jew/Negro/White Court of Appeals denied his appeal.”

George Richard Tiller, MD, a Wichita, Kansas physician who provided abortions and was the medical director of the Women's Health Care Services, was assassinated on May 31, 2009, during worship services at the Reformation Lutheran Church in Wichita. He was serving as an usher and handing out church bulletins. Tiller was shot once in the head at point blank range by a gunman who escaped after threatening two others, then fleeing in a car.

Three hours after the shooting, the anti-abortion activist Scott Roeder was arrested about 170 miles away in suburban Kansas City. On June 2, 2009, Roeder was charged with the first-degree murder and two counts of aggravated assault in connection with the shooting.

On June 1, 2009, a converted Muslim man shot two new Army soldiers, killing one, at a military recruiting center in Little Rock, Arkansas. A man in a black SUV drove to the recruitment office and fired "several shots" with an assault rifle at around 10:30 a.m.

The captured suspect, Abdulhakim Mujahid Muhammad, reportedly had been under investigation by an FBI joint terrorism task force after he traveled to Yemen and was arrested there for using a Somali passport. The probe was in its early stages and based on Muhammad's trip to Yemen, according to ABC News.

Police Chief Stuart Thomas identified the victims as 23-year-old William Long of Conway, who died, and Quinton Ezeagwula, 18, who was wounded and in stable condition. The two soldiers, both wearing fatigues, had recently completed basic training and volunteered to help attract others to the military.
Posted by Loren Coleman at 3:17 PM

I have a sinking suspicion that the arrest of radio schmuck Hal Turner will have more to do with setting this guy off than anything else.

please, there is NO connection to 9/11 truth... this is a culture war talking point, perfectly timed to halt questions about 9/11, the federal reserve, freedom of speech, et al. this guy was a fringe racist & of course he's ex-military... thanks loren for all your good work, but please don't continue this conflation of 9/11 truth with violent nuts.

I merely am noting what is widely being reported on the net, that Bruun was a 9/11 "truther." See here, here, and here, for example.

I would like to hear more on what Brunn was and was not, of course, but according to both left and right info, he was involved in all the belief systems I mention above on this posting.

The mainstream media saying someone is a '9/11 truther' doesn't make it any more factual than J. Edgar Hoover saying someone he didn't personally like was a communist. I see a conscious attempt by establishment power centers to conflate 9/11 truth and outrage over the corruption in corporate finance with morally repugnant stances like Holocaust denial. This is an age-old propaganda trick meant to divert attetrion from the crimes of the elite...