In the last few days, villagers of Xertigny have frequently sighted a “mystery crocodile.” Eyewitnesses have included members of the fire brigade and police department.

Xertigny is a village of some 3,000 inhabitants in the Vosges region in eastern France.

The hunt for the creature has turned into a media circus, and the beast is now being dubbed the “Loch Ness Monster of Vosges.” 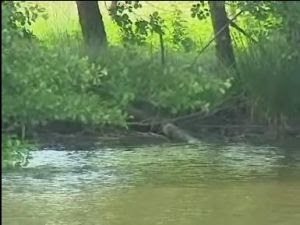 The Monnin pond where the crocodile has been seen. Now what does Monnin mean? It appears to be, in French, from a shortened pet form of the personal name Simon. The name Simon is of Hebrew origin, and its meaning is "to hear, to be heard; reputation." In terms of Biblical connections, Simon was the name of two of the apostles, including Simon Peter.

The police have established a security perimeter around the Monnin pond to prohibit the fifty or so onlookers and dozen journalists present from approaching the water. Greater details about this drama can be read here. 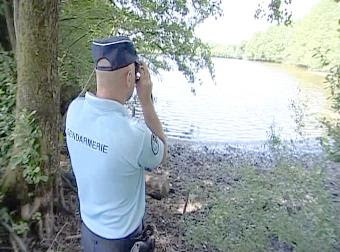 A member of the gendarmery guards the borderland of the pond and continues the search for the enigma.

For our purposes at this "Twilight Language" blog, it is intriguing to read a bit more about the location of all this recent mysterious activity.

A Xertigny village legend recounts that local brewery owner Victor Champion discovered the treasure of the Knights Templar in the nearby woods, which provided the fortune for creating the Arboretum de Xertigny (4 hectares), also known as the Arboretum du Château des Brasseurs, a municipal arboretum and park located at Mairie 1, le Château, Xertigny, Vosges, Lorraine, France. The location of its discovery is duly marked.

The arboretum was established in 1994 to protect the former park of the Château des Brasseurs (Brewers' Castle), originally created in 1888 by local brewery owner Victor Champion, who planted a number of trees from North America and Asia when laying out the park. Although Xertigny's brewery closed in 1966 and the château now houses the town government, the arboretum preserves many of the park's old trees, including fine specimens of Araucaria (e.g., the living fossil tree, the Monkey-Puzzle),Cladastris lutea (American Yellowwood), Pseudotsuga (Douglas Fir), Fraxinus ornus (Manna Ash), and Sequoiadendron (Sequoia or Redwood, 45 meters).

Even the choice of trees appears to have some significance in terms of a mystical orientation for this locale.

1) Araucaria is a genus of evergreen coniferous trees in the family Araucariaceae.

Many if not all current populations are relicts, and of restricted distribution. These columnar trees are living fossils, dating back to early in the Mesozoic age. Fossil records show that the genus also formerly occurred in the northern hemisphere until the end of the Cretaceous period.

The most famed species of this genus is Araucaria araucana (Pehuén or Monkey-puzzle). Because of the species' great age it is sometimes described as a living fossil. Araucaria araucana is the national tree of Chile. Said to look like a pyramid, it appears to be symbolic to various group. It is known sacred to members of the Mapuche Native American tribe.

The spiky leaves of the monkey puzzle were never evolved to stop monkeys however, but rather to stop grazing dinosaurs eating it before it could grow out of their reach, such is the ancient age of this tree.

2) Cladastris lutea is the American Yellowwood. It is an unusual tree as it is actually a legume or pea species.

3) Pseudotsuga is the genus of the five species of the Douglas-fir. The female cones are pendulous, with persistent scales (unlike true firs), and are distinctive in having a long tridentine (three-pointed) bract that protrudes prominently above each scale. A California Native American myth explains that each of the three-ended bracts are a tail and two tiny legs of the mice who hid inside the scales of the tree's cones during forest fires, and the tree was kind enough to be the enduring sanctuary for them.

Size probably was the attraction of this tree. Coast Douglas-fir has attained heights of 393 ft (120 m). That was the estimated height of the tallest conifer ever well-documented, the Mineral Tree (Mineral, Washington), measured in 1924 by Dr. Richard E. McArdle, former chief of the U.S. Forest Service. The volume of that tree was 515 cubic metres (18,190 cu ft). The tallest living individual is the Brummitt (Doerner) Fir in Coos County, Oregon, 99.4 metres (326 ft) tall. Only Coast Redwood [which includes Sequoiadendron (Giant Sequoia) and Metasequoia (Dawn Redwood)] reach greater heights based on current knowledge of living trees. At Quinault, Washington, is found a collection of the largest Douglas Firs in one area. Quinault Rain Forest hosts the most of the top ten known largest Douglas Firs.

4) Fraxinus ornus is the Manna Ash. A sugary extract from the sap is extracted by making a cut in the bark; this was compared in late medieval times (c.1400) with the Biblical manna, giving rise to the English name of the tree. It is also called the South European Flowering Ash.

5) Sequoiadendron giganteum (giant sequoia, Sierra redwood, or Wellingtonia) is the sole species in the genus Sequoiadendron, and one of three species of coniferous trees known as redwoods, classified in the family Cupressaceae in the subfamily Sequoioideae, together with Sequoia sempervirens (Coast Redwood) and Metasequoia glyptostroboides (Dawn Redwood). The common use of the name "sequoia" generally refers to Sequoiadendron. Giant Sequoias are the world's largest trees in terms of total volume.

One of the world's most famous secret societies (Bohemian Club) gave its name to the annual meetings in the Bohemian Grove, in Monte Rio, California, an encampment area consists of 160 acres (0.65 km2) of old-growth redwood trees over 1,000 years old, with some trees exceeding 300 feet (91 m) in height.

The Grove's well-known symbol is the Owl Shrine. The Club's patron saint is John of Nepomuk, who legend says suffered death at the hands of a Bohemian monarch rather than disclose the confessional secrets of the queen. A large wood carving of St. John in cleric robes with his index finger over his lips stands at the shore of the lake in the Grove, symbolizing the secrecy kept by the Grove's attendees throughout its long history.


"Every year, in various freshwater rivers and lakes around the globe, people report seeing alligators and crocodiles that are probably out-of-place, discarded pets. When these reports involve escaped animals, capture is routine. When it doesn't, something else seems to be involved." ~ The Field Guide to Lake Monsters, Sea Serpents, and Other Mystery Denizens of the Deep (NY: Tarcher/Penguin, 2003, page 163.)
Posted by Loren Coleman at 9:39 AM

Guess I'm going to have to get out my big book of trees when I get home from work...

No, it is not just because of the out-of-place significance of the trees, but the specific ones that appear to have been picked.

I have expanded on various known information on what trees that have been identified from this French location. Needless to say, there may be other trees in that collection that may have even more meaning, but I'm working with what info I have.