High school football coach Ed Thomas, 58, was killed Wednesday, June 24, 2009, in the weight room of his high school in Parkersburg, Iowa. Mark D. Becker, 24, a former Thomas football player, is charged with first-degree murder. He is being held at the Butler County Jail in Allison.

----
Update
Authorities say Mark Becker was released Tuesday from a hospital where he had been brought for psychiatric evaluation after threatening a man with a baseball bat Saturday night and leading police on a high-speed car chase.

Police say they were supposed to be notified when Becker was fit for release, but that they weren't.

Covenant Medical Center in Waterloo said in a statement Thursday that its staff was not asked to notify authorities before releasing Becker. - SI/CNN reporting on Thursday, June 25th
==== 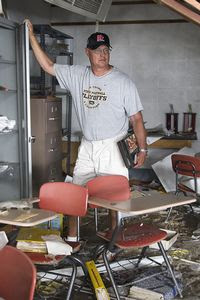 Coach Thomas stands in the midst of the 2008 rumble caused by a tornado. ESPN.

Thomas was shot multiple times at point blank range, including once in the head, according to the school's business manager Pat Gosch. No one else was injured in the incident, the Cedar Rapids Gazette reported.

Sports secretary Sue Muller said Thomas was supervising the early-morning weightlifting in Parkersburg when the shooting happened around 7:45 a.m. About 30 students were present at the time. The school has about 230 students.

The Des Moines Register said the Aplington-Parkersburg High School coach died at Covenant Medical Center in Waterloo after being shot at about 8:30 a.m. in the weight room next to the school.

Aplington-Parkersburg school superintendent Jon Thompson told the Waterloo-Cedar Falls Courier the Iowa Division of Criminal Investigation would be investigating the shooting, which occurred in front of students.

Coincidentially, exactly one year ago, on June 24, 2008, ESPN published a story on the recovery the town had made from a recent tornado, in large part because of the leadership efforts of Coach Thomas.

It was a just about four weeks ago, on the evening of May 25, when an EF5 tornado, three-quarters of a mile wide, with winds in excess of 200 mph, ripped through this community of 1,900, destroying or damaging nearly half the town. The tornado, which stayed in Parkersburg for 34 seconds before traveling another 43 miles, killed six people and leveled 21 businesses, the city hall and the heart of the community: Aplington-Parkersburg High School.

This is the building -- in the middle of nowhere -- that produced four active NFL players, the fifth-most of any high school in the country.

[Jared] DeVries, Aaron Kampman of the Packers, Casey Wiegmann of the Broncos and Brad Meester of the Jaguars had always given the credit to Ed Thomas, Aplington-Parkersburg's longtime coach. Thomas taught every boy in this town how to play football, but also how to be a man. Now his life lessons were being put to the test, especially when he asked six of his players to dig the graves for those killed by the storm,

Respect the wonder of the 24th of June.
Posted by Loren Coleman at 2:16 PM