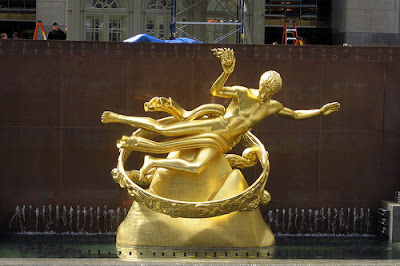 One group of national election night broadcasts constantly showed an intriguing sculpture. What does it mean? First, let's look at a bit of the background on the setting.

The centerpiece of Rockefeller Center is the 70-floor, 872-foot (266 m) GE Building at 30 Rockefeller Plaza formerly known as the RCA Building – centered behind the sunken plaza. Unlike most other Art Deco towers built during the 1930s, the GE Building was constructed as a slab with a flat roof, where the Center's newly renovated observation deck, the Top of the Rock is located, which was first built in 1933.


This area, the sunken Rockefeller Center plaza, has been renamed "Democracy Plaza" during the Election reporting cycle of NBC. Democracy Plaza has served for the last three elections as the vortex of that network's activity. On Election Night 2012, this Rockefeller location served as a hub for all the NBC News outlets, with NBC, MSNBC, Telemundo and CNBC all anchored or had a presence there. (Source.)

In many of the on-screen shoots, a rivaling image was seen. A golden statue. 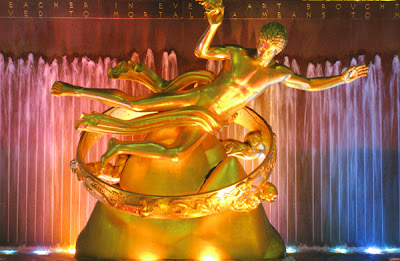 If you watched any of these NBC outlets, the centerpiece sculpture was visible on your television or online screen. The acclaimed sculptor Paul Manship was commissioned in 1933 to create a masterwork to adorn the central axis, but its wasn't until December 25, Christmas Day, 1936 that the ice-skating rink was finally installed.

Sculpture Paul Manship's highly recognizable bronze ("golden") gilded statue of the Greek legend of the Titan Prometheus recumbent, bringing fire to mankind, features prominently in the sunken plaza at the front of 30 Rockefeller Plaza. The model for Prometheus was Leonardo (Leon) Nole, and the inscription from Aeschylus, on the granite wall behind, reads:


Prometheus, teacher in every art, brought the fire that hath proved to mortals a means to mighty ends.

The sculpture is said to be the fourth-most familiar statue in the United States, behind the Lincoln Memorial, Mount Rushmore and the Statue of Liberty, but Manship was not particularly fond or proud of it. (Source.)

Prometheus (Greek: Προμηθεύς) is a Titan, culture hero, and trickster figure who in Greek mythology is credited with the creation of man from clay. Prometheus stole fire from Zeus and gave it to the mortals, an act that enabled progress and civilization. He is known for his intelligence, and as a champion of mankind.

It will be recalled that Ridley Scott's Prometheus opened on June 8, 2012, as a major motion picture. I discussed this film and its relationship to Blade Runner (a decidedly Art Deco-stylized film) earlier this year (here and here).

On August 19, 2012, Ridley's brother, Tony Scott died by suicide after he jumped from the Vincent Thomas Bridge (see here and here, "Divine Sacrifice of the King").

Some conspiracy sites have characterized the Prometheus sculpture as a statue of Lucifer, as they do with other Rockefeller Center artwork, such as Wisdom. 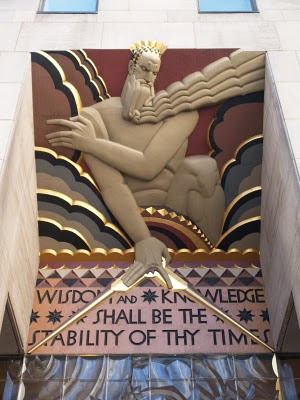 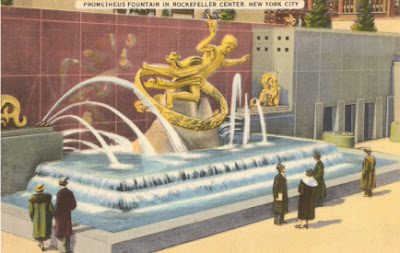 The statue of Prometheus bringing fire down from heaven and giving it to mankind, is one of the most evident pieces of art found on the Rockefeller Center complex. It is a re-telling of the story of Lucifer who offered to mankind the fruit of the tree of knowledge of good and evil....Substitute the name Prometheus for Lucifer, and you will perceive the true substance of this monument. Lucifer was judged by God, not for a benevolent act on behalf of mankind. Lucifer’s fall actually occurred prior to Adam and Eve’s residency in Eden. Source.

Three other example sites that make the link between this Prometheus sculpture, Lucifer, and Satanic thoughts can be found here, here, and here.

What does it mean? Nothing and everything.


"The Titan Prometheus wanted to give mankind equal footing with the gods and for that, he was cast from Olympus. Well, my friends, the time has finally come for his return." ~ Prometheus, 2012, Ridley Scott, director.


Indeed, "Prometheus" was also known as "Pyrphoros" (or "Purphoros," that is, in Greek, "fire-bringer"). "Lucifer" transparently means "light-bringer" - a Latin word meaning the same thing as "phosphoros" (in Greek). The Latinized "Phosphorus" (along with "Hesperus" itself a Latinization of "[H]Esphoros")* is also a alias of Venus (namely, "the morning star"). Venus is sometimes also called the "dawn-bringer," "Eos-phoros" (Greek). And I don't need to tell you that the Roman word for "dawn" is...Aurora.
Note [*] Greek doesn't have a letter that would be transliterated by "h." Rather, Greek has "smooth" and "rough" breathing marks. And the rough breathing mark generates the "h"-phoneme. So the Greek for "evening-bringer" (the root of the name for the "evening star") was "[rough-mark] Esphoros."

My sincere thanks to assistance from Caleb for important info on this sculpture.
Posted by Loren Coleman at 9:40 PM

And Venus is the planet associated with Quetzalcóatl/Kukulcan.

But what all this really says is that no culture stands in isolation. Influences from other cultures (past and present) are pervasive.

We adopt the signs and symbols of other peoples usually without fully understanding the meaning they originally conveyed. Then we project new memes on or alter the meaning of these older symbols to fit a different or more modern context.

That piece of real estate is one of my favorite in New York City. Its architecture and art distill the essence of 20th Century America.

The statue of Prometheus, the bringer of fire, synchromystically resonates with the statue of Big Tex, which brought fire to onlookers last month at the State Fair of Texas. The unfortunate accident and its relationship to Wicker Man and human sacrifice were discussed on this blog at the time. The Big Tex immolation foreshadowed later fairground tragedies, as gunfire migrated off the midway and cork guns were replaced by weapons with more firepower.

It is not known whether or not 52' Big Tex had a girlfriend (the star of Attack of the 50 Foot Woman was probably too urbane for his tastes), but Aeschylus tells us that Prometheus, while bound to a rock, was visited by a "cow girl." Io stopped by to chat after Zeus had changed her into a talking cow.

Io's guard was Argus, who was dispatched by Hermes. Big Tex' fiery farewell was sandwiched by two films which set the box office on fire: Prometheus and Argo.