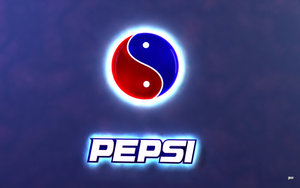 This Thanksgiving, the Fight begins at Dawn. 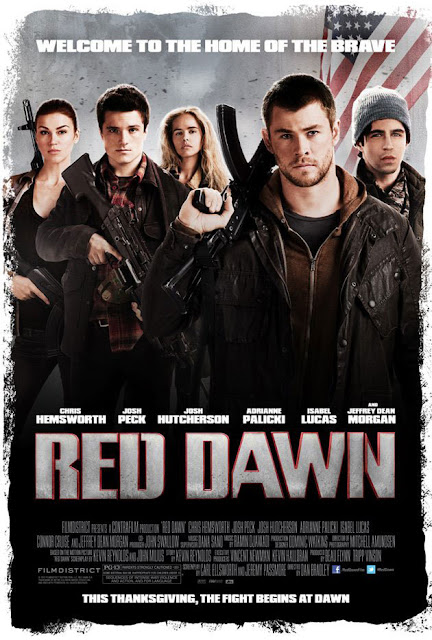 What will happen with this new film's opening on Wednesday, November 21, 2012? What sites of significance are tied to this movie? Products? Names?

Anonymous left the following comment on my earlier "Red Dawn" posting: "The original trailer, on the laserdisc release, includes a scene with a tank rolling up to a McDonald's where enemy soldiers are eating. The scene does not appear in the final cut, and was likely removed due to a mass murder at a McDonald's in San Ysidro, CA, weeks before the film opened." 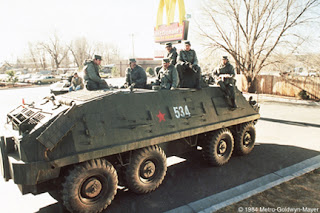 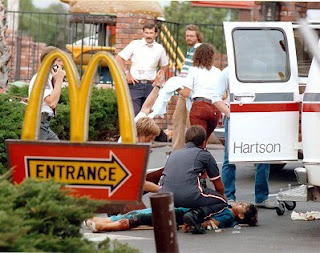 First of all, for those who weren't alive then, the images above and below give you some idea of the Columbine-like wall-to-wall nature of the coverage. The media seized this reality form of broadcasting in 1963, when the television networks were made aware they could increase ratings as they covered the JFK assassination for four straight days in November. 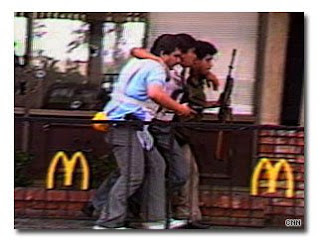 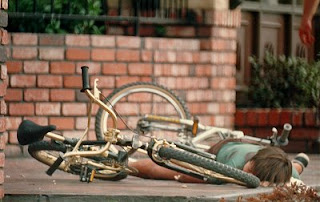 At the time it was released, Red Dawn (1984) was considered the most violent film by the Guinness Book of Records and The National Coalition on Television Violence, with a rate of 134 acts of violence per hour, or 2.23 per minute (Source). The DVD Special Edition (2007) includes an on-screen "Carnage Counter" in a bizarre nod to this.

Certainly, the San Ysidro-McDonald's event did change the Red Dawn that would be seen in 1984. It appears the filmmakers made a correct decision in changing the film, at least regarding the McDonald's "trigger" imagery.

The new Red Dawn movie does not appear to have a "Colonel Ernesto Bella" in it, as in the 1984 version. "Bella" was played by Ron O'Neal (who became most famous as "Super Fly" in the movie of the same name, 1972, and then played minor roles, like "Charles Zurich" in Knight Rider's "Sky Knight" episode, 1985). O'Neal died in 2004.

Enki, who saw an early screening of Red Dawn (2012), writes: "I do not have much to report in the sync department, except for the fact that the new film takes place in Spokane, Washington instead of Colorado, and as Michael noted, Simon Bolivar is considered to be the George Washington of South America. The school shooting from the first film is absent from the remake, which was probably a no-brainer decision on the part of the filmmakers, and another memorable and unsettling scene from the original was altered to be less disturbing."

But recent copycat events are giving a bit of a pause. Enki forwards this, today: "Lammers allegedly planned to shoot up the B&B Bolivar Cinema 5, which is located on Bolivar's East Aldrich Road. Aldrich = old or wise ruler, which makes me think of a king. The accidental gun discharge took place at king-resonating Regal Cinemas on Sanguinetti Road in Sonora. Sanguinetti = little blood. The King-Kill current I was sensing seems to be coming to the surface. Might the next red dawn event be a political assassination?"

Needless to say, few of us have to be reminded that November 22nd is the anniversary of the JFK assassination.

What do you notice in this film?

One thing is certain. There is a new red dawn coming. 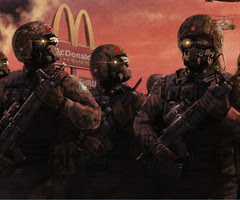 The enemy takes over McDonalds, 1984.
What product placements are in the new 2012 version of Red Dawn?
Be alert: Look for Pepsi and Subway.

Source.
Posted by Loren Coleman at 8:44 AM

RE:
" Enki, who saw an early screening of Red Dawn (2012), writes: "I do not have much to report in the sync department, except for the fact that the new film takes place in Spokane, Washington instead of Colorado."

A few interesting things about Spokane, Washington is that
" The explorer-geographer David Thompson (1770-1857), working as head of the North West Company's COLUMBIA Department, became the first European to explore the Inland Northwest.In 1810 he sent out trappers, Jacques Raphael Finlay and Finan McDONALD, to the Spokane River to build a trading post in eastern Washington that would exchange with the local Spokane and Colville Indians.

At the confluence of the Little Spokane and Spokane, Finlay and McDONALD built a new fur-trading post: the first long-term European settlement in the Washington state area "

Notice the McDONALD and COLUMBIA connections to Spokane ?

" Joint American–British occupation of Oregon Country, in effect since the Treaty of 1818, eventually led to the Oregon Boundary Dispute as large influxes of American settlers began arriving by the Oregon Trail. The first American settlers in the present-day city, squatters J.J. Downing and S.R. Scranton, built a cabin and established a claim at Spokane Falls in 1871 "

So the town was originally called Spokane FALLS until the falls was eventually dropped from the name.
Notice also that the
"Treaty of 1818" also eludes to the "Deadman's Hand" in poker -
A pair of 8's and a pair of Aces.

In "Batman R.I.P.", while Batman is talking to The Joker in Arkham Asylum, The Joker deals himself a "Dead Man's Hand".

In One Flew Over the Cuckoo's Nest by Ken Kesey, McMurphy has a dead man's hand tattoo on his shoulder - "a poker hand fanned out across his muscle - aces and eights".

Spokane also had it's own RED DAWN event -
" Spokane's growth continued unabated until August 4, 1889, when a fire, now known as The Great Fire, began shortly after 6:00 p.m. by a warm curling iron that came in contact with a curton in an apartment in Downtown Spokane that and destroyed the city's downtown commercial district.Due to technical problems with a pump station, there was no water pressure in the city when the fire started.In an effort to starve the fire, firefighters began demolishing buildings with dynamite. Eventually winds died down and the fire exhausted of its own accord. In the fires' aftermath, 32 blocks of Spokane's downtown were destroyed two people died by looting in the ashes. From this point on Spokane started using brick to build buidings in Spokane ."

Also interesting is
"The Spokane Shock" are a professional arena football team based in Spokane, Washington, playing their home games at the Spokane Veterans Memorial Arena.

Interesting sun type logo they have as well.

RE:
" The first American settlers in the present-day city, squatters J.J. Downing and S.R. Scranton, built a cabin and established a claim at Spokane Falls in 1871 "

Chris Hemsworth the Aussie (Oz)star of "Red Dawn"
who plays Thor was also in the movie,
"The Cabin in the Woods"

Notice also that red star of the North Koreans/Russians in both versions of the movie "Red Dawn" ?

Notice any red stars in that picture in the link above?

Another famous Spokane resident was Michael Phillip Anderson (December 25, 1959 – February 1, 2003) was a United States Air Force officer and NASA astronaut, who was killed in the Space Shuttle COLUMBIA disaster when the craft disintegrated after reentry into the Earth's atmosphere.

Anderson was born in Plattsburgh, New York, into an Air Force family and grew up as a military brat. He attended high school in Cheney, Washington, while his father was stationed at Fairchild Air Force Base, west of Spokane.

Anderson?
Where have I heard that name before?

The flight insignia of that doomed shuttle mission is quite interesting also,as far as red dawns go.

So far all seems quiet on the Southwestern Front. That is, I have not spotted anything in the news that I would classify as a red dawn event. I did notice a couple of natural disasters - there was a volcano eruption in New Zealand and a major earthquake southwest of San Antonio (San Antonio, Chile, not Texas, so only a very minor sync hit).

I even noticed some possible good news, at least for space enthusiasts like me, and a few more syncs, too. NASA is saying that the Curiosity Rover has discovered something "earthshaking" (earthquaking) on the surface of Mars, and many are speculating that the discovery is proof of life on the planet's surface. Earlier searches were performed by the Thor-resonating Viking and rubedo-resonating Phoenix landers. If life is discovered on the red planet, we may see a new dawn of planetary exploration.