The Twilight Language of Nigel Kneale 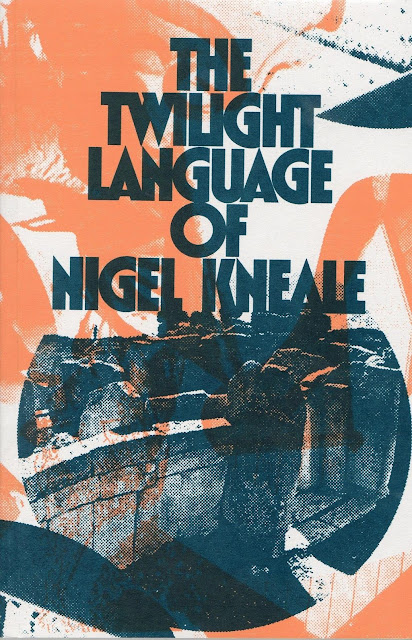 One of the most influential television writers of the 20th century and the writer of one of the most important motion pictures in Yeti cryptofiction died six years ago. Now a mysterious book of his life has appeared..

That would be Nigel Kneale, here pictured from the 1950s. At the Hammer Film's site, in a remembrance there, writer Robert Simpson shared the news of Kneale's death.

Tom Kneale (better known as Nigel Kneale) died on Sunday 29 October 2006 aged 84. To many he was the godfather of television science fiction, a literary genius, and one whose work for Hammer Film Productions was of immeasurable importance to the development of the company. Established myth has Kneale born on the Isle of Man in April 1922, and although he grew up on the island, he was in fact born in Lancashire, England. Kneale spent time as an actor and a writer of prose before commencing work as a scriptwriter for the BBC. It was whilst at the BBC in the early 1950s that Nigel Kneale wrote the ground-breaking serial The Quatermass Experiment. It was event television, emptying the streets and pubs for the six weeks of its duration. Hammer director Anthony Hinds saw the first episode, and by the time of the second instalment's broadcast, had secured a deal with the BBC for Hammer to make a film version.


Simpson detailed most of his column with background on The Quatermass Experiment television series, and the movies of the same name, directed by Val Guest. But for one paragraph, Kneale is remembered for the reason he is most significant to me.

Kneale also adapted his own BBC serial The Creature for Hammer as The Abominable Snowman in 1957 and wrote the final script for Joan Fontaine vehicle The Witches in 1966. Hammer Film Productions' Chairman Larry Chrisfield said "He made a huge contribution to Hammer's  history and we are greatly indebted to him."


The Abominable Snowman, also known as The Abominable Snowman of the Himalayas is one of those remarkable films that captures so many levels of the cryptozoological pursuit of the Yeti. It has a status similar to Half Human (1955 in Japan, 1957 in the USA), in my mind, and elevated the story of the Snowman above the level of other 1950s movies, such as The Snow Creature (1954) and Man Beast (1956), which had more in common with drive-in theater fare.

The Abominable Snowman of the Himalayas is the story of an English botanist, Dr. John Rollason (played with extreme intelligent by Peter Cushing) who agrees to go on an American expedition lead by Tom Friend (Forrest Tucker), who is at first covertly looking for the Yeti. As it turns out, the Friend character is out to kill and/or capture the Yeti.

The curse of the Snowman dogs the expedition after the trapper Ed Shelley (Robert Brown) kills one of the creatures, as he and others die throughout the film. I won't spoil the movie if you haven't seen it, but the portrayal of the Yeti comes out far better than that of the ugly American characterizations.

Especially interesting to me is a question I have never had answered: Was the character of the American Yeti hunter and exploiter "Tom Friend" (shown above next to the film's Yeti body) based, in some part, on the real Texan Yeti hunter Tom Slick.

Slick received a good deal of mass media attention from the mid-1950s through the beginning of his February 1957 expedition. The fact he was bringing guns, was accused by the Chinese of spying, and in general a "rich American" looking for the Abominable Snowman got the attention of such press outlets as Time Magazine, Newsweek, Reuters, and The New York Times. Since the movie was based on a teleplay, which would have been very responsive to current events, I think there is a direct link here between "Friend" and Slick.

The English character Dr. John Rollason carries Kneale's dialogue that killing a Yeti by this cold-blooded American ("Tom Friend") is not the greatest idea in the world. This was a common perception that was being expressed in the 1950s' British and Indian press when mentioning the forthcoming Yeti hunts of Tom Slick.

Slick was discussed rather chillingly as an "American millionaire" out to catch a Yeti and a person who pushed hard to obtain special permits from Nepal to shoot one in self-defense, if it came to that. It does not take a deep reading of the media at the time to see that concerns were being raised about Slick's definition of "personal safety."

To me, every time I watch The Abominable Snowman of the Himalayas, I see one way that Tom Slick was viewed in 1957, and it serves as a significant historical window on how people were against the American search for the Yeti in the Fifties.

I don't have the book in hand, and am having some difficulty ordering it. But if I find a way, I'll be picking this up.
Posted by Loren Coleman at 5:55 PM

Looooong before Ridley Scott did "Prometheus," Nigel Kneale did "Five Million Years to Earth" (1967, "Quartermass and the Pit" in England) about a spacecraft discovered buried in London from millions of years ago. The story involved humans being mutated, and "race memory" and place names-- Hobb's End--and it is one of the best SF films I've ever seen, certainly one of the most thought-provoking.

1967! Great stuff from Nigel Kneale! (Not to forget Barbara Shelley was in it too! It had everything!)

In fact, from 1967 "Quartermass and the Pit" to 2012 "Prometheus" is kind of a step down, even if the special effects are infintely better. What's happened to us?

Wow. I loved "Five Million Years to Earth" and remember much of it after seeing it only once about 30 years ago on broadcast TV. I keep looking for it but, can't find it on DVD at a price I can afford. Sigh. I want to see it again so bad. It really is that good. Neale was a terrific screenwriter.

is the original BBC series available or lost to time?
such a great film, too!

nice comment, mark, about Prometheus. what we lost was our ability to tell an intelligent, deep, thought-provoking story. we now only deliver thrill rides with a few brief "thoughtful" moments. thankfully, all the old stuff is on dvd or something...

"Quartermass and the Pit" can be viewed online. Check here for it, as well as a number of old favorites: