If A Mayan Knocks... 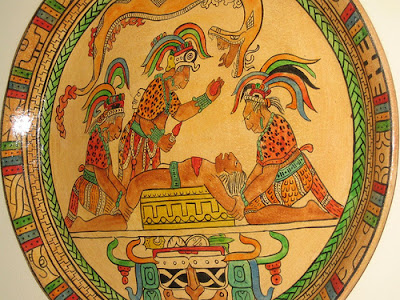 "Just to be safe, don't let any strangers wearing feathered headdresses into your home for the next 24 hours," tweeted, on Thursday morning, by a Mexican friend going by the handle Red Pill Junkie (RPJ).

Okay. That's worth a nervous bit of laughter.

So I searched for an appropriate image to go with RPJ's comment. Though not colorful, this first one I found (below) struck me. But I had not visualized a dwarf when I read RPJ's line. So why a little person, I asked myself? 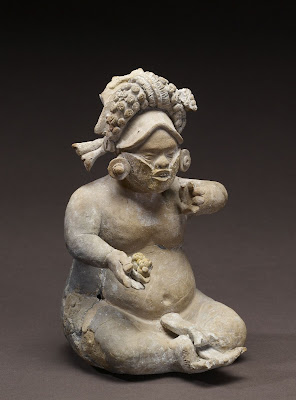 Dwarfs were important members of royal Maya courts. They are portrayed serving food, playing musical instruments, holding sacred objects for the ruler, and as diviners and scribes. Their elevated social roles were steeped in cosmology and religious mythology, especially that of the maize god, who was assisted by a dwarf when the deity set the Three Stones of the cosmic hearth at the beginning of Creation. The Classic Maya viewed dwarfs as the living embodiment of the maize god's supernatural helpers, who continued their sacred duty in the regal court. Maya peoples today believe that earlier creations were populated by a race of dwarfs who now reside inside the earth, living below the ruins of the ancient cities. The ornate turban worn by this dwarf is typical of the courtly garb of key individuals serving the ruler. This so-called spangled turban headdress is especially connected to gods and humans associated with Creation and scribal duties. A curious feature of this dwarf is what may be a halved cacao pod held in his right hand. His cheeks are covered with what appears to be a thin, woven fabric; this recalls other figurines, many of which are dwarfs, with an unidentifiable material plastered to the lower half of their face. These features suggest the depiction of a formal rite. The graceful rendering of this figure and the exceptional attention to detail reveal the work of a master artist.

I pasted in the above paragraph, because this public domain image definitely needed explanation. Then I went back to Twitter to double-check RPJ's exact "headdress" wording, to make certain I had typed it correctly.

I don't know why I should be surprised, but here's what RPJ also posted soon after his first one, but I had not seen it: "In case a weird dwarf knocks on the door, have a pen in hand...."

That's sync-linking working on parallel planes, I'd say. (For more on the twilight language of suicidal dwarfs, see here.) At the top is a Yaxchilan ballplayer shown with two dwarfs. 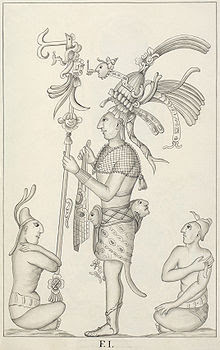 During my undergraduate college years, I actually worked with Robert L. Rands, Ph. D., one of the first modern era archaeologist to work at Palenque. Hundreds of sherds later, I had great respect for what he would find there, even though it was not as exciting as what Mayan conspiracy theorists see in his results. 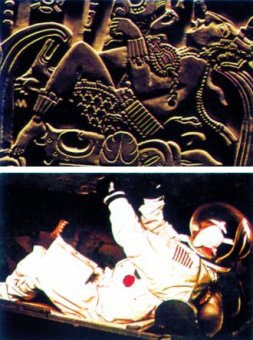 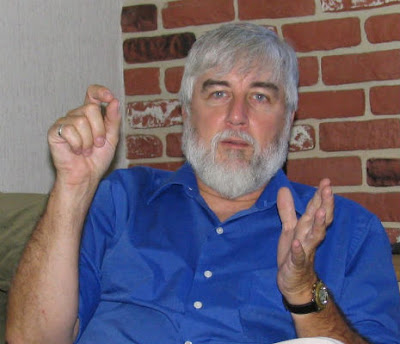 What do I really think about the supposed Mayan calendar business, with all the melodrama about the end of the world coming tomorrow? This morning, my interview on the topic, with Dangerous Minds' columnist Thomas McGrath, appeared in "The Eve of Destruction? DM Talks 'End Times' with Loren Coleman, America's Unlikely Cassandra." 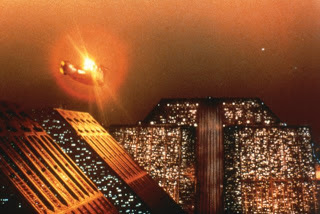 And finally, if you missed it, check out Boing Boing friend David Pescovitz's December 20th contribution, "The Future, As Imagined by Hollywood." 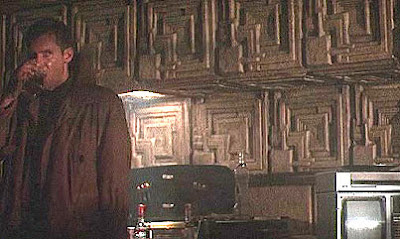 If you are going to go Mayan, you might as well do it in style, a la' The Blade Runner. 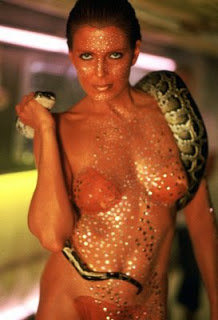 Okay. Everyone seems to be tired of the Mayans. Time to move on the Olmec? 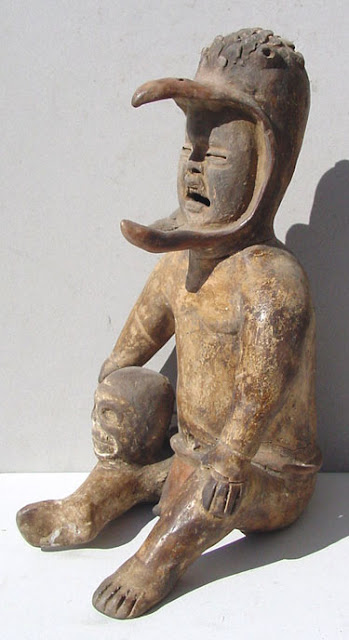 A Vera Cruz Olmec figurine holding a skull and wearing an eagle headdress associated with the Olmec death cult and human sacrifice rituals.

And, won't you know it, here is an Olmec dwarf.
Source.

Posted by Loren Coleman at 7:53 PM

I would love to get more information on the Alux from you.

Which books of yours should I order?

Ha! That was a nice synchronicity :)

I discussed the little people of the Mayans, the Alux, in 1985, in

Did Mayans Keep Aluxob As Slaves?

Thanks Loren, I have several of your books, but not one that went into depth about the Alux yet.