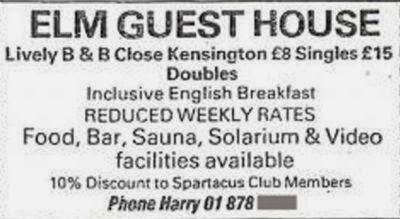 "Elm House" or "Elm Guest House" is a British phrase that has become a larger than life scandal in the United Kingdom, during 2013. In terms of completeness, I felt the need to mention it here before the year's end. This seems especially true as the name game is working overtime with this one.

In November, you will recall, I posted "Elm Street: The Mason Road of JFK/King-Kill/33," and that may be consulted for more on the background significance of "Elm."

The news of Elm House, first coming in 2012, broke out more in February 2013. It was a modern version of the Hellfire Club, apparently.

A victim of the VIP paedophile guest house has told the Sunday People of the horrors that went on there.
The former care home orphan says he and his 12-year-old brother were sent by staff to the Elm Guest House for “a treat”.
There they were lured into cider and beer-drinking races to get them drunk and ordered to dress in girls’ fairy costumes while their pictures were taken.
Finally they were forced to take part in vile sex acts after phoney games of hide-and-seek.
The victim, now a family man, broke down in tears as he told the Sunday People of his nightmare at the Elm – and how his tormented brother killed himself a decade after leaving care. Source. 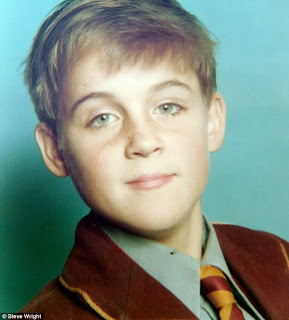 Peter Hatton-Bornshin, who was in the care of the Grafton Close Children's Home as a teenager and abused at Elm House, took his own life at the age of 28. Source.

A former child protection officer claimed...a Special Branch detective held a gun to his head to stop him investigating a VIP paedophile ring.
Chris Fay said he was pinned to a wall and throttled before being given a chilling warning to “back away” from allegations surrounding the notorious Elm Guest House in Barnes, south-west London.
Young boys in care were allegedly taken there in the Eighties to be abused by high-profile MPs and other powerful establishment figures.
Mr Fay, who worked for the now-defunct National Association of Young People In Care, accused the Metropolitan Police of acting like “gangsters” when news of the scandal broke in 1990. He revealed how some Special Branch members routinely threatened him and his colleagues and even victims over a three-month period of intimidation.
His shocking claims come as West Yorkshire Police faces accusations that the force protected paedophile Jimmy Savile. Source.


More summaries of this Elm House scandal can be found in "Elm Guest House and the Can of Worms," "The Friday Morning Club," and Wikipedia's "Elm Guest House Child Abuse Scandal."
Posted by Loren Coleman at 9:16 AM

My email: arielacohen99@gmail.com. I have been investigating the predatory paedophile Godson Cult presently settled in Benevent l'Abbaye, central France. I would value hearing from anyone with further knowledge of the child brothels they ran in Thailand, Cambodia and Ireland.

My email: arielacohen99@gmail.com. Please contact me if you have further information about Chris and Clare Godson who fled to France in 2004. Prior to their arrival in Benevent l'Abbaye they cloaked a child brothel by claiming to be evangelical Christian outreach workers/missionaries. We urgently need to hear from two female victims in Ireland who contacted us having seen this Blog. They were 11yo and 13yo when exploited by the predatory Clare Godson. Please also contact us on the Whistleblower Blog: lacreusehostsevilcult.blogspot.com.

My email: arielacohen99@gmail.com. Our Whistleblower Blog is: lacreusehostsevilcult.blogspot.com. I urgently need to hear from two female victims of the Godson Cult who contacted us and told us they were 11yo and 13yo at the time of the assaults and who were forced into prostitution by the cult leadership who are now in Benevent l'Abbaye,France.

My email: arielacohen99@gmail.com. Thank you so much for making it possible for two victims of the Godson Cult in Ireland to find us. As an update: the two victims are so fearful of Clare Godson that we are meeting them at a secret location next week and we have promised them protection at the highest level because they know that local Gardai have been corrupted by bribes from the Godson Cult.