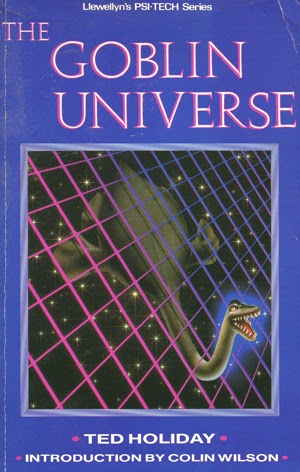 December 5th is the day on which Nelson Mandela, and, now we learn, Colin Henry Wilson, 82, died. He suffered a stroke in June 2012 and lost his ability to speak. He passed away on Thursday.

Wilson (26 June 1931 – 5 December 2013) was a prolific English writer who first came to prominence as a philosopher and novelist. Wilson also wrote widely on true crime, mysticism, the paranormal, and other topics. 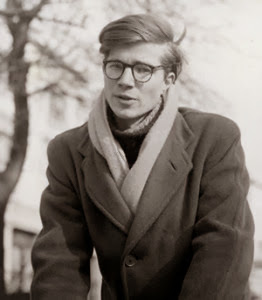 In terms of a fiction writer, Wilson sometimes critiqued or commented on H. P. Lovecraft and the Cthulhu Mythos.

But I was mostly interested in his history and development, in the nonfiction realm:

Wilson became associated with the "Angry Young Men" of British literature. He contributed to Declaration, an anthology of manifestos by writers associated with the movement, and wrote a popular paperback sampler, Protest: The Beat Generation and the Angry Young Men. Some viewed Wilson and his friends Bill Hopkins and Stuart Holroyd as a sub-group of the "Angries", more concerned with "religious values" than with liberal or socialist politics. Critics on the left swiftly labeled them as fascist; commentator Kenneth Allsop called them "the law givers".
After the initial success of Wilson's first work, critics universally panned Religion and the Rebel (1957). Time magazine published a review, headlined "Scrambled Egghead", that pilloried the book. By the late 1960s Wilson had become increasingly interested in metaphysical and occult themes. In 1971, he published The Occult: A History, featuring interpretations on Aleister Crowley, George Gurdjieff, Helena Blavatsky, Kabbalah, primitive magic, Franz Mesmer, Grigori Rasputin, Daniel Dunglas Home, and Paracelsus (among others). He also wrote a markedly unsympathetic biography of Crowley, Aleister Crowley: The Nature of the Beast, and has written biographies on other spiritual and psychological visionaries, including Gurdjieff, Carl Jung, Wilhelm Reich, Rudolf Steiner, and P. D. Ouspensky.
Originally, Wilson focused on the cultivation of what he called "Faculty X", which he saw as leading to an increased sense of meaning, and on abilities such as telepathy and the awareness of other energies. In his later work he suggests the possibility of life after death and the existence of spirits, which he personally analyzes as an active member of the Ghost Club.
He has also written non-fiction books on crime, ranging from encyclopedias to studies of serial killing. He has an ongoing interest in the life and times of Jack the Ripper and in sex crime in general. Source. 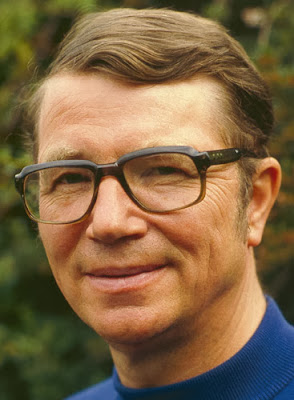 The books that Wilson wrote were earth changing within the world of what he called phenomenological existentialism, included  The Outsider, The Occult, and The Goblin Universe.

I once worked, as the fact-checker and photographic researcher, with Colin and Ted Holiday on the 1982 book, The Goblin Universe, the one cryptozoology-styled book to which Wilson seems to have contributed. My blurb, along with ones from John A. Keel, Janet and Colin Bord, and Hans Holzer appeared on their bottom. 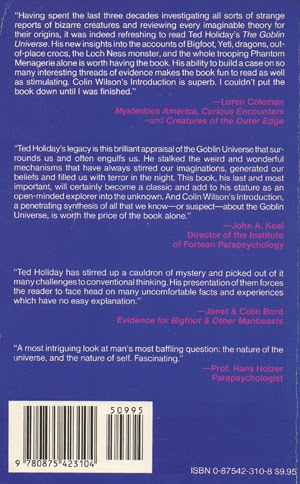 Colin Wilson was able to work with so many people, writing scores of introductions to others' books, seemingly because his view of the field was so broad. 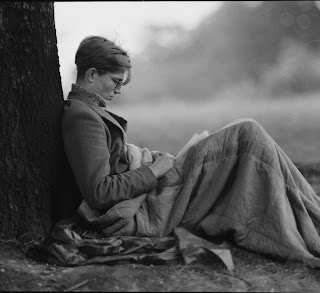 Colin Wilson was the author of many works. The following list is the generally accepted bibliography of Wilson's.

Posted by Loren Coleman at 5:31 PM