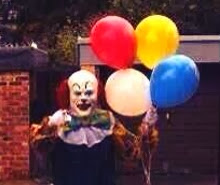 This was the top scary clown story of the year.

The sightings of a mystery clown may have been taking place for some time, but reports of them tied his initial appearance to Friday the 13th of September. In the British town of Northampton, the creepy clown was of a man with white face, red hair and sharply arched eyebrows. He appeared in two separate areas of Northampton.

These accounts increased into widespread reports of circus characters scaring people in Northampton. 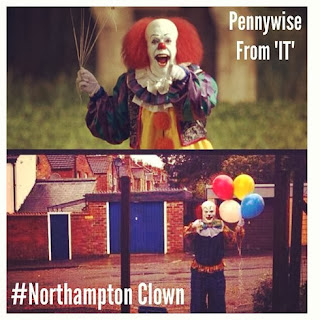 Norfolk police received a report from a member of the public alarmed by a clown sighting in Gaywood, near King's Lynn, late in November. The suspect was described as wearing a "full clown outfit" with a red suit and red hair. A similar report was received the next day, after two clowns were spotted near a skate park in the town. These people wore "Halloween-type" clown masks.

In both cases, the callers reported being alarmed and being chased a short way up the road. One account said some copycats carried knives and chased people, sparking entertainment group Clowns International to brand them a menace. Source. 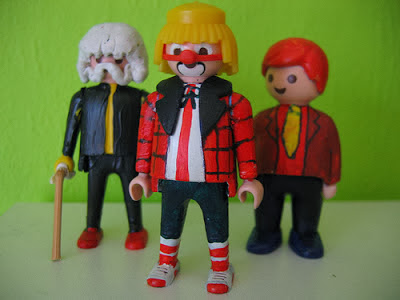 In the Dutch city of Volendam three clowns beat a boy during the local clown festivities (which involves over 200 clowns) over a January 2013 weekend. 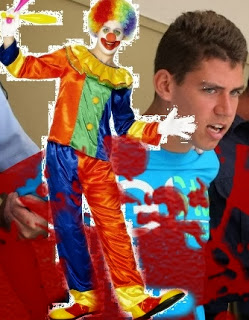 On the island of Crete in Hersonissos, a violent fierce attack by a Dutch hotel clown was made against a Russian family's child, aged 11 years, who was stabbed 20 times in the chest, back and left arm. No sexual abuse was found. 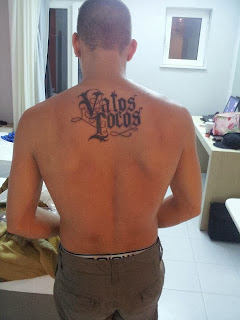 Police authorities arrested a 20-year-old Dutch hotel employee Cirino Schrijver, who allegedly has confessed that he is the perpetrator of the attack on the minor. He was the hotel's clown. On his back (shown) is a tattoo with the words, Vatos Locos. Vatos Locos (in English, Crazy Dudes) is a widely used name for a street gang. Source. 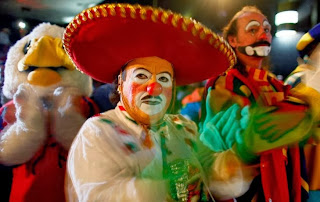 The authorities in Mexico have said gunmen dressed as clowns have shot dead a former leading member of a once-powerful and violent drug cartel. Francisco Rafael Arellano Felix, 63, was killed in a beach resort in Baja California in northwestern Mexico. 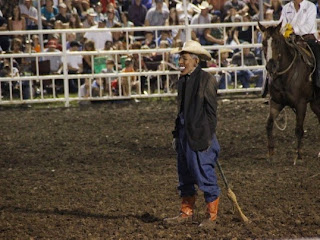 In August, a clown wearing a mask intended to look like President Obama was part of a rodeo act at the Missouri State Fair. Fair officials apologized, calling the display inappropriate and disrespectful. Source. 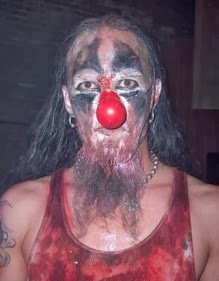 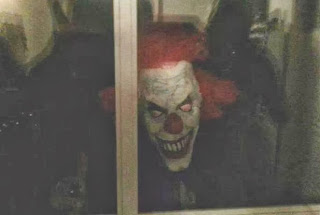 The Lincoln clown stunt that was widely circulated on social media networks in mid-November 2013 was a hoax.

A Facebook page called 'Lincoln Clown 2013' created on [November 18th] gathered more than 8,000 likes before it was deleted on [November 19th], shortly before 10pm.
The page reported so-called sightings of the clown in Lincoln, with several locations across Lincolnshire reporting similar encounters.
The Lincoln Clown 2013 Facebook page surpassed 8,000 likes in 24 hours before being removed.
Another similar page called 'Hykeham’s Clown' surfaced on [November 20th] and gathered some 2,000 likes before being removed.
The frenzy around people wearing scary clown masks and costumes at night was originally inspired by the Northampton clown, who was unmasked as a 22-year-old student following his street appearances earlier in the year. Source. 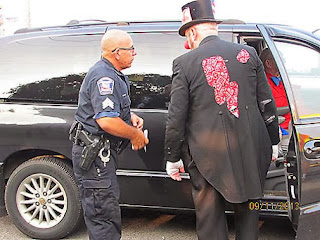 As the Denver Post noted, "a U-turn, not clowning around, caused a crash involving a van full of clowns" in West York, Pennsylvania. The September 11, 2013 incident happened on that Wednesday evening, according to multiple media sources.

The van was going south on South Highland Avenue when its driver attempted a U-turn near a gate of the York Expo Center and collided with another van that was also heading south about 5:45 p.m., according to West York Police. Police said the driver, 83-year-old James Billingsley of York, also known as "Dimples the Clown," suffered a minor bump on the head. His passenger clown, 77-year-old Norman Clouser of York, was unhurt. Source. 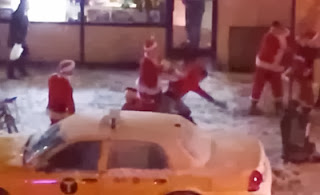 Santa Claus sometimes is nothing more than an evil clown in a red suit. This year was no exception. Drunken Santas fought in the open in Union Square, and a weird Santa peeked in the windows of a school in New Hampshire. Bad Santas, very bad form Santas. Read more at "Santa Terror."

Thus ends the review of evil clowns for 2013, which happened in the recent 2012-2013 context of attacks by Leprechauns in the USA, Oompa Loompas in the UK, and Smurfs bashing a man in Australia.

This post showcases what I love about Twilight Language and Loren Coleman overall. Every topic is re-framed and re-imagined pulling from several seemingly (at first) unrelated sources. I had always feared clown imagery, now I fear the threat of real-life clowns! Thanks Loren. Fascinating post!

CLOWN = NWOLC = New World Order Loren Coleman :] ; or anything else for LC